As Pablo explains to Benjamin, in a scene from the movie Secret in their Eyes, “A guy can change everything: his face, his house, his family, his girlfriend, his religion… God, but there is one thing that he cannot change, Benjamin, … he cannot change his passion.” For every fan of a team, the club they love is their passion. In my case, it is Club Deportivo Palestino (Palestinian Sports Club). To many, this may seem bizarre. It could even be seen as something irrational, but I think that in my case with Palestino, there is an explanation.

Unlike many, I don’t remember when I went to see Palestino play for the first time. I assume it must have been in 1992 or 1993, in La Cisterna. I was born in October 1990. My dad, José, was treasurer of the board, chaired by Fernando Lama between 1988 and 1993, during that legendary campaign that saw the Club promoted in just one season. In other words, the Club was present in my life since my first months of life. My whole family are fans of the Club, and my grandfather and several relatives have been leaders of the institution.

Up to this point, my relationship with Palestino may not differ much from the stories of other clubs’ fans. What makes this relationship special is that Palestino summarizes several of my identity landmarks, things that mark you as a person. Palestino represents the contribution that the Palestinians and their descendants made to our country; it is the emblem of it, of a group of immigrants who knew how to integrate into the country, who learned how to love it, contribute to it, but who have never forgotten their roots. It is the symbol of integration. Our community is proud of the dedication that the Club shows to the lower classes: it doesn’t deal only with sport, but also does social work for thousands of Chileans. Palestino has changed the lives of many, especially with the football academies for minors in Jerusalem, Ramallah, Gaza, Bethlehem, and Beit Jala, since 2020. We hope that there will be a Palestino academy in every Palestinian city.

In addition, Palestino represents a different and peaceful form of resistance, of maintaining the flag of a country that cries out for its legitimate demands. This is the essence of the club. 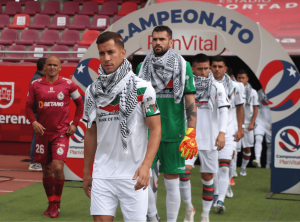 Although it was officially founded in 1920, the decision to take the club to professional level came from the initiative of a group of young people, led by Father Raúl Hasbún. The latter said on the occasion of the 1947 partition of Palestine: “Palestine is being erased from the map… In Chile we have to put it back on the map.” Professionalizing the Club would put the name of Palestine in the media at least once a week, first in Chile, but hopefully in all of South America. With the intent of professionalizing the club, they took it to the Osorno Arab Olympiad in 1949, to finally see it debut in the Second Division in 1952, win the championship, and get promoted to the First Division.

The dreams of these young Palestinians were supported by the great businessman Amador Yarur, who refused to change the name from Palestino to Arabe despite an offer of a large amount of money. 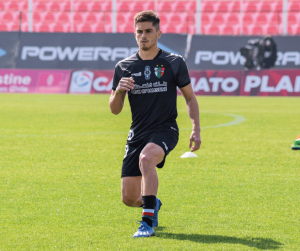 The objective was clear, and it has been fulfilled in excess: Palestino is Palestine. In times when many denied the existence of our people, in times when the flag was banned, it flew in Chile from north to south. In Chile and in South America, our identity could not be denied: Palestino is a club that is twenty-eight years older than the State of Israel. Along with globalization, its fans multiplied around the world: the Club made it possible for Palestinians in Palestine and in exile to follow the team. Not only Palestinians, but many people who feel themselves represented by the Club, since Palestino is, ultimately, a form of resistance, as embroidered on the club’s shirt: “More than a team, a whole people.” 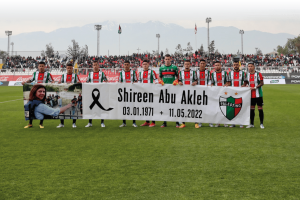 That is what Palestino is: the living representation of my identity. We go to the field to support a Chilean team, but a large number of the songs are adaptations of Arab songs. The fans do not use the bass drum, like other teams in South America; we used the daf and tob’bale (as we call the derbake in Chile). In the stadiums, flags are sold not only with the Club’s shield, as is the case with other teams, but also the Club and the fans are represented by the Palestinian flag. Vine leaves and Arabic cakes mingle with mechada (a typical Chilean sandwich) and peanuts, and swearwords in ancient Arabic are mixed with typical Chilean ones. That is Palestino: the clearest and most vivid expression of our Chilean identity of Palestinian origin. 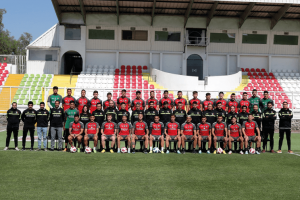 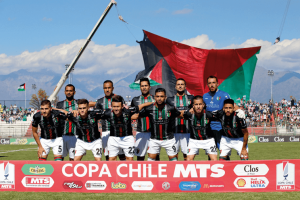