Speak to Palestinians across the West Bank today about the topic of women and renewable energy, and you will hear a number of common statements reverberating from Nablus to Hebron as in an echo chamber: “Women aren’t strong enough to carry solar panels,” “Women don’t climb poles,” “If I need to hire someone for my small solar company, I will hire a man,” and, in the private sector, “Women will accept less pay.”

While some of these assertions are a genuine reflection of persistent though very much evolving cultural norms in the West Bank today, they also risk artificially defining the sector as a male-dominated industry that revolves around the installation of photovoltaic equipment, and where women play only modest supporting roles. In reality, the renewable energy sector is vastly more multifaceted, and opportunities for women’s engagement and leadership are far greater than what these statements suggest. 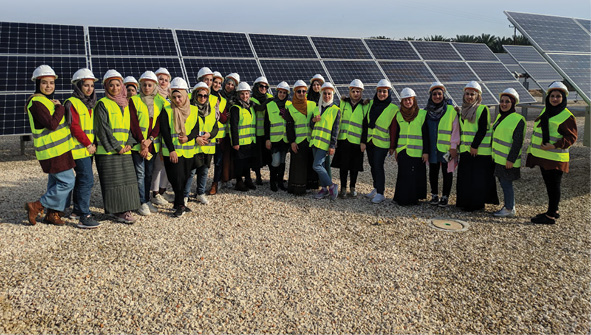 As acknowledged by Dr. Hasan Abu-Libdeh, chairman of the Federation of Renewable Energy Industries, in a recent interview with GROW, women face different types of discrimination in the workforce. He argued, however, that we need not focus our energies purely on ensuring that equal numbers of men and women are present on the job site to install panels and connect them to the grid. This may be difficult to achieve in the short term. Instead, it may be more worthwhile to focus on more knowledge-intensive jobs where female staff can provide additional value to Palestinian energy organizations and consumers.

In the context of a territory that is perceived to be graduating more female engineers per capita than nearly anywhere in the Middle East, there is no shortage of qualified candidates. However, while 26 percent of engineers certified by the Palestinian Engineering Association last year were female, the association’s director of training and employment, Mamoun Ryan, says that many have difficulty finding jobs after graduation. But this need not be the case in the future.

The Palestinian Energy and Natural Resources Authority (PENRA) set itself a target of achieving 120 megawatts (Mw) of renewable energy capacity in the West Bank and Gaza by 2020. With 70 Mw already online and a further 50 Mw in planning or under construction, PENRA’s Eng. Basel Yaseen confirmed to GROW that PENRA considers this target achieved. As a result, PENRA has now set for itself a new goal of 500 Mw by 2030, 80 percent of which will come from solar energy sources and the remainder from wind and biomass. Much of this solar energy, moreover, will leverage the vast amounts of available installation space on the rooftops of Palestinian homes, businesses, and public organizations.

To achieve this ambitious target in the context of significant economic constraints, it will clearly take concerted effort on the part of the entire existing and nascent labor force. It will also take extensive cooperation between government, the private sector, academia, and civil society. For Palestinian women, this should mean a wealth of opportunities.

In the private sector, smaller enterprises such as Sunergy and Ayava Solar, and larger corporations such as the Jerusalem District Electricity Company (JDECO), will require qualified engineers to lead the design of small- and large-scale photovoltaic (PV) systems for installation on household rooftops or industrial use. At the industrial level, large distribution companies such as JDECO will also require more trained engineers able to remotely manage the performance of these systems from afar and dispatch technicians when repairs are required.

Enterprises large and small will also require skilled salespeople who are able not only to speak to the technical details of their PV systems but also to identify with the questions and concerns of household members – often women themselves – responsible for looking into whether solar is for them. As the female directors of a Nablus-based community organization attested to GROW, knowledge about renewable energy solutions and their benefits is already widespread, even at the village level. However, common concerns persist around affordability, payment options, safety, and storage that still need to be addressed to turn this latent demand into widespread adoption. Since these concerns can often best be addressed through meetings within the home or at local community centers, female Palestinian sales agents may be better placed than their male counterparts to do so.

For those companies not yet sure about the viability of employing more female staff, firsthand experience can be crucial. Palestinian vocational training expert, Dr. Randa Hilal, for instance, highlighted research to GROW showing that when employers see firsthand what their female staff can do through short-term job placements or co-ops, this can lead to immediate changes of opinion and greater numbers of women entering their workforce.

In the public sector, as demand for renewable energy grows among households and enterprises, so will demand on government agencies such as PENRA to deepen its regulatory oversight, develop and implement certification systems, oversee feasibility studies, and enforce laws. Similarly, as the cost of technology declines, more and more municipalities will follow the lead of Ramallah and Tubas. These West Bank cities have taken a proactive lead in investing in renewable energy for many years as a means to reduce energy consumption costs of government buildings and infrastructure while providing better services for their residents. Such public sector employers are also well suited to trained female professionals.

As explained to GROW by Eng. Khaled Ghazal and Eng. Malveena Al Jamal, senior officials at the municipality of Ramallah, the city first started investing at scale in renewable energy 12 years ago through its 15kW PV system at the Ramallah Cultural Palace, which remains in operation. More recently, it invested in a 15kW pilot project for the Expert Centre in 2017, and it is in the process of procuring a 23kW system for the city’s headquarters. Moreover, it is implementing a project to install 3.5kW solar panels on 125 light poles while also outfitting 10 kilometers of street lighting with LED bulbs.

Each of these projects requires a professional manager, substantial design work, and electrical engineers to maintain them, skillsets already available among local Palestinian women. Once employed, these women have access to progressive employment policies that help them remain on board for the long term, such as equal salaries for women and men in the same role and consistent respect for existing labor laws during pregnancy.

Similarly, female graduates or business leaders with an entrepreneurial bent and a background in finance or management may also go on to create businesses that can fill a current gap in the local banking sector. Unlike in many other parts of the world, pay-as-you-go or payment-by-installment options are not widespread for consumers with an interest in investing in small-scale solar systems but who lack the up-front cash or collateral to purchase them. This presents a significant barrier to the growth of the renewable energy sector in the West Bank but is not insurmountable with a certain degree of creative disruption.

Whether it be in a private, public, or community-based capacity, women clearly have a role to play in the further growth of renewable energy, and energy efficiency, as drivers of the West Bank and Gaza’s energy autonomy. If their knowledge, skills, and creativity can be accessed on a much wider scale, all residents will enjoy a brighter future ahead.