Once the decision was announced to hold legislative council elections in the West Bank and Gaza, the genie was let out of the bottle. There can be no going back to the state of affairs as it was before the decision was signed and announced. For better or worse, we are on a course from which there is no going back, and the final result is open to all sorts of possibilities, both good and bad. When I say or good or bad, I have the Palestinian national cause in mind, the quest for freedom, justice, and dignity. I do not look at good or bad from the point of view of the personal interests of any individual. While the legislative council elections are acted out through the steps taken by individuals who do have their own interests in mind, I see these individuals through the prism of their being instruments of national liberation, at least I hope that is the case. 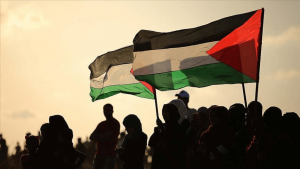 In addition to the geographical split, the elections are in fact the beginning of a process whereby a new generation of Palestinian leadership begins to assume center stage.  But there is no reason to believe that the old guard will accept, acquiesce, and vacate the scene quietly, gently, or gracefully. On the contrary, the elections, meant to give the people a say in who they want to see as their ruling class, can also usher in an era of vicious competition between individuals who want to position themselves as future leaders. Nevertheless, I hope (and pray) that the competition between them will remain civil. I believe that the competition will be between individuals, not political parties, because no political faction is currently seen as having a sweeping mandate from the people, which is evident through the opinion polls, except for those that have been tampered with. In the absence of political parties that have sweeping mandates, the vaccum will be filled by individual competition. Another contradiction brought about by the elections: The political parties support the elections because they want to solidify their presence, yet they find themselves fighting for survival, and this is true for all of them.

At the level of future leadership and the elections, I would keep a watchful eye on what Marwan Barghouti and Nasser Al-Kidwa are saying and doing. While both of them are from the rank and file of the establishment, they are running as anti-establishment candidates, and indeed they are the only candidates who can have their cake and eat it, too. Call it coincidence, call it political brilliance, call it a mistake, but in the final analysis, they are the ones who benefit most from the state of idiosyncrasies otherwise known as the Palestinian legislative council elections.

Other candidates seem comfortable challenging the system from the outside only, and while many of them have no political burden by which the people will judge them, most of them lack national recognition and are known only in their narrow geographic locations. They will therefore create weak opposition, and their electoral platforms will lack substance. The most important issue is this: The majority of the 36 tickets lack political parties or teeth. Their electability revolves around their ability to convince people to give them the benefit of the doubt.

It will be a great loss if we end up electing persons who cannot deliver. Some of the candidates can deliver, of course, and they do have national recognition and credibility. But unfortunately, most of the candidates are running on their own names rather than on the names of parties, as if they have magical characteristics that will convince people to vote for them. My greatest fear, and this is a likely scenario, is that we will end up with a totally nonhomogenous legislative council. While diversity is good, disunity is bad.


Right now we have 36 tickets running for the legislative council elections, and I purposefully avoid calling them political parties because most of them are not. This huge number serves the interests of Hamas, whose voters are united behind one ticket, whereas other voters will be divided across 35 tickets, three of which belong to Fatah. This does not speak to diversity; it speaks to chaos.

At any rate, none of the above-mentioned elements can be considered a wildcard, but the same cannot be said of Palestinian youth. They constitute approximately 45 percent of Palestinian society, and they have little or no experience with elections. While their participation will be a landmark, and the precedent they will set through their participation will be the basis for future activism, there is no comprehensive, independent research that indicates what Palestinian youth want from these elections or where they want to see the Palestinian cause in the years ahead.

Palestinian youth are currently disenfranchised, especially those who reside in Jerusalem, and all indications point to anger and frustration among them due to the lack of economic opportunity and the absence of a political horizon for the question of Palestine, in addition to mistrust of the political system and lack of political role models. Youth are by all means the largest segment of voters in the upcoming legislative council elections, but they are not getting the attention they deserve, which means also that if they end up casting a vote of anger, they will derail the entire process and give us unexpected results.

While I have always been an ardent supporter of justice for women in Palestinian society, and while the issues that women are raising are just and deserve respect and a fundamental change in our legal system, I believe that women voters will be less of a wildcard than, for example, youth.

Following their instinct, youth are likely to cast a vote of anger, whereas women are less likely to do so. Personally, I wish that they would show their anger because they deserve a better place in our society. Palestinian women are less likely to cast their vote based on women’s issues – an inclination that will weaken their status as an electoral block – and are likely to vote based on political affiliation, tribal loyalty, and traditional norms. This means that they will in fact forgo the opportunity to shatter the current status quo. Unfortunately, there are no signs that they will exert that type of pressure.

Having said this, it would be wrong to look at the elections only through the prism of societal, political, and private interest groups. We need to look also at the host of issues that are the source of disenfranchisement in Palestinian society and that intertwine with the mentioned groups and affect the votes they will cast.

For better or worse, we are on a course of no return, and the stakes will be too high and the price exorbitant if anyone tries to put sticks in the wheel. I prefer that we go ahead and take up the challenge of the unknown path rather than sit idly by, because I believe in the universal truth that while democracy may not the best system, nothing better has ever been invented.