The Eastern Mediterranean region includes the southern Levant and part of Mesopotamia – encompassing Palestine, Jordan, Lebanon, Syria, and Iraq – and is known for its rich base of ecosystems and biodiversity hotspots*1 where unique endemics and species mix are found.*2 In general, the region is characterized by riverine ecosystems with small lakes, coastal lagoons, aquatic systems, and single large river systems. The freshwater eco-region includes the upper Tigris and Euphrates, the Orontes, the coastal Levant, and the Jordan River. This eco-region covers a narrow coastal plain backed by mountain ranges up to 3,000 meters high. The coastal Levant eco-region includes the coastal strip of the Levant that ranges from the western slopes of the Jabal an-Nusayriyah Mountains in Syria to the Lebanon Mountains, the Central Highlands in Palestine, and the Sinai.


The Jordan River is an internal river of 360 kilometers in length that originates at the Syria-Lebanon border. Its tributaries are the Hasbani, which flows from Lebanon, the Banias River, which emerges from a spring at Banias at the foot of Jabal as-Sheikh (Mount Hermon), and the Dan River, also sourced at the base of Jabal as-Sheikh. The Jordan River then flows through Buhaira at-Tabariyya (Lake Tiberias) before it receives its main tributaries, the Yarmouk River and the Zarqa River. Due to the diversion of the Jordan River’s flow, however, it has become not more than a stream. Wadis – valleys with intermittent watercourses – that flow into the Jordan include Wadi Mujib, Wadi Mousa, Wadi Hassa, and Wadi Zarqa. The river’s waters feed into the Dead Sea, the hypersaline lake located in an elongated depression in the Jordan Rift Valley. The wetlands around the Dead Sea are home to the indigenous bird called the Dead Sea sparrow (Passer moabiticus).

The Eastern Mediterranean Wetlands are among the important ecosystems that enrich the region with unique biodiversity and contribute to human well-being and livelihood with valuable ecosystem services. These areas are known to contain water in whole or in part or a high percentage of moisture and water throughout the year or for a temporary period. They are divided into natural wetlands, such as lakes, rivers, swamps, marshes, and stretches with fresh or salty surfaces, and artificial ones such as dams and others. Wetlands across the Eastern Mediterranean region provide a wide variety of ecosystem services, including water, food, and income. The main services provided by wetlands include reed-plant harvesting, with reeds being used as fodder and material to make roofs, baskets, and fences; they constitute a key source of income in the area. Furthermore, they run water-powered grain mills, as local communities traditionally used water to generate energy to grind their harvested wheat. In addition, they are a source for sea salt harvesting, as salt ponds adjacent to the Dead Sea are used for the production of salt and hence provide employment for local communities. The saltpans secure a safe breeding location for flamingos (Phoenicopterus roseus) in several sites along the Eastern Mediterranean wetlands. The wetlands provide runoff management services, as the sedimentation of eroded soil increases the soil fertility in valleys, and groundwater is purified from sediments and organic pollutants. Rivers function both as corridors that contribute to the maintenance of ecological continuity in natural systems and as high-quality leisure and recreation areas between urban areas and within cities. They are habitats for a diversity of freshwater fish and other species: of the 1,236 species studied by IUCN*3 of freshwater fish, mollusk, odonate (dragonfly and damselfly), freshwater plant, bird, amphibian, crustacean, and mammal, up to 29.8 percent are endemic to the Eastern Mediterranean region.*4 Finally, there is the indirect value of the Eastern Mediterranean wetlands that provide flood control, groundwater recharge, and climate change mitigation. 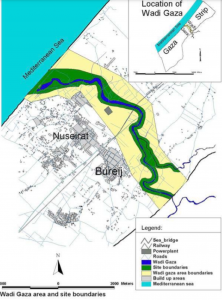 Palestine is characterized by its great ecological diversity, dense vegetation, and wide wildlife base. It is an essential crossing-land for migratory birds between the continents of Europe, Asia, and Africa. Among the ecosystems available in Palestine is the important wetland system that comprises interconnected habitats for the rarest or most endangered birds and other freshwater species. However, Palestine’s multiple surface-water resources, including the Jordan River and the permanent and nonpermanent valleys that flow into the Mediterranean Sea, the Jordan Valley, and the Dead Sea, are now considered scarce, as there is currently a limited number of surface-water sources in the West Bank and Gaza Strip, as most valleys flow for only a few weeks a year, usually in the form of temporary flash floods, and this source is difficult to collect and exploit. In most valleys, complex geological/geographic characteristics are transformed due to the absence of major natural storage dams (few plains and an underground layer of limestone). There are many regions that are considered wetlands of interest, and some of them are of international importance. These areas include the Jordan River, Wadi al-Badan, Wadi al-Qelt, Ein al-Fashkha, Marj Sanur, Ein Qinina, Wadi al-Malih, and Wadi Gaza and Gaza beach, among others. Some famous wetlands of aesthetic and ecological value are described below.

There are a number of wetlands in Palestine.

Wadi Gaza extends along the eastern borders of the Gaza Strip. Its springs lie in the Negev hills and the southern heights of Hebron. The tributaries that feed Wadi Gaza have their sources in the central mountain areas, the low heights north of the Negev, and the west and southwest parts of the Hebron Mountains. The feeding and drainage basin of the valley covers an area estimated at 3,391 square kilometers, while the wadi’s length is about 105 kilometers from its source to the coast where it discharges into the sea. Its circuitous route from the Strip’s eastern border to the sea is 7 kilometers, with a maximum elevation of 30 meters above sea level. Thousands of ducks, herons, storks, cranes, flamingos, waders, raptors, quails, passerines, and other birds have been reported to pass through Gaza. The most common endemic bird is the Palestinian sunbird (Nectarinia osea) found throughout the year. Studies show that there is an urgent need to protect Wadi Gaza and its surrounding vegetation communities, as these habitats contain the highest value for the flora and fauna. The threats to these habitats are quite severe, and Wadi Gaza faces many environmental problems that affect public health, as it is used as a collection point for sewage from the refugee camps in Gaza’s central area and as a dumping site for solid waste. Thus, Wadi Gaza has been placed on the Tentative List of UNESCO’s World Heritage List Nominations.*5

Wetlands gain economic importance as they are considered productive natural wealth that provide livelihood materials for people, services, and ecological and environmental functions for various living organisms. In addition, they are a continuous renewable source of groundwater.

Wadi al-Badan is located in the Nablus governorate. It is an area that attracts tourists because of its natural beauty and distinctive scenery, the diversity of its terrain, its vegetation, and the abundance of water springs. There are seven permanent springs in the village of Al-Badan, distributed through streams that all converge to form Wadi al-Badan. As a result of the abundant availability of water, about 12 ancient water mills were built in the past that were used to grind grain. Streams and water channels cover the permanent vegetation, especially reed trees, which are still exploited in handicrafts and used in parks or to make mats and roofs for sheds. In the village of Al-Badan there is an eight-kilometer-long walking path that enables tourists to see the picturesque landscapes throughout the year, as it passes along many rocky slopes and through varied vegetation. The path also sheds light on the Palestinian culture in the village of Al-Badan, where one can see the lands planted with almonds and citrus fruits, in addition to the existing natural forests in the surroundings. However, the area needs appropriate environmental and conservation measures to sustain the natural resources, landscapes, and the tourism sector that it relies on.


Marj Sanur is an inland valley with an area of ​​about 583 square kilometers, located in the Jenin governorate in the West Bank. Several villages and towns overlook the valley and share ownership of its lands, namely, Sanur, Mithloun, Jerba, Musalla, Sir, Al-Jadida, and Siris. Marj Sanur is located to the southeast of Jenin and is famous for its fertile land, as there are water wells that support vegetable farming. At times, it is completely filled with water and looks like a beautiful lake. The marj sometimes brings great losses to the inhabitants due to the flooding of a large portion of its lands with rainwater and the consequent loss of the agricultural season, in addition to the spread of insects and rodents. More than 26,500 Palestinians depend on the water and economic resources of this area, and it is an important tourist area especially when the marj is full of water.

Wetlands preserve the gas balance in the air and the hydrological and chemical balance of water; they also support other habitats and food chains.

Ein al-Fashkha, located on the western side of the Dead Sea, is home to the springs called Oyoun al-Fashkha. They are small, but they are considered to be a refuge for many migratory birds, as large plants grow in the area, the most important of which is the reed. The water of al-ain emerges from the ground very close to the Dead Sea. Thanks to this spring, the spot was transformed into agricultural land, which has been exploited by the Israeli occupation to obtain agricultural products and foodstuffs. Previously it had been an important resource for the Palestinians living near the area. It is worth noting that this area, which is rich in economic and vital resources, cannot be accessed or used by the Palestinians.


These areas are among the most important characteristics of the country, as they maintain an integrated and homogeneous environmental system. But their environmental and strategic importance has not spared them the risk of neglect and erosion, as their existence is threatened by sewage water and other human excesses. Wetlands are considered to be particularly sensitive to activities that affect them. On the level and quality of water, wetlands suffer from a reduction in their water volume, planting along their borders, and neighboring urban development, in addition to the excessive exploitation of their resources. Despite the significance of these areas, few are aware of their importance and the need to preserve them as an integrated ecological and biological system.


There is an urgent need to study these areas and declare the most important of them to be natural protected areas, a task for the relevant stakeholders, mainly the Environment Quality Authority. It is of importance to equip the governing and/or managing bodies with the necessary mechanisms and tools to achieve sustainable management of these areas. We must obtain support through the signing of the International Ramsar Convention*6 to help ensure the conservation and sustainable development of these areas and hence become registered under the International Wet Zone List. This will contribute to the continuous evaluation of the status of these areas as well as to their rehabilitation, the elimination of pollution causes, and the conservation of plant and animal species that depend on them, while focusing on their value in order to preserve their natural components for maintaining and sustaining environmental, social, and economic balance.

A Ramsar site is a wetland site designated to be of international importance under the Convention on Wetlands, known as the Ramsar Convention, which is a UNESCO-established intergovernmental environmental treaty that came into force in 1975.*7

*1 Hotspots are regions that contain at least 1,500 species of vascular plants (> 0.5% of the world’s total) as endemics, and have lost at least 70 percent of their original habitat. For more information, please visit the webpage The Mediterranean Red List of the International Union for the Conservation of Nature (IUCN), available at https://www.iucn.org/regions/mediterranean/our-work/biodiversity-knowledge-and-action/biodiversity-status-and-trends/mediterranean-red-list.

*2 For an outline of the area, visit the interactive map provided by the organization Fresh Ecoregions of the World, available at https://www.feow.org/ecoregions/details/436.