Published by Olive Branch Press, an imprint of Interlink Publishing, 2023

Available at the Educational Bookshop, Jerusalem, and online booksellers worldwide.

For more information and to order, visit http://palestinehijacked.net. 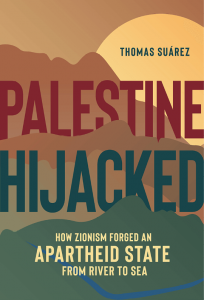 “This is a book of history written to influence the present” – These opening words of Palestine Hijacked neatly summarize the core purpose of this new book by Thomas Suárez. It is indeed a book brimming with history about the “hijacking” of Palestine, from the turn of the twentieth century to the Suez Crisis of 1956, some of the most interesting of which has never before been published.

It is history pulled out of its museum display, dusted off, and put to work: Suárez wields it as a weapon to lay bare the truth behind the “narratives” that afford the Israeli state seemingly endless impunity. To accomplish this, Suárez dissects the Zionist movement’s actual driving forces, its motivations, methods, and ever-present messianic theater, interweaving a half-century of secret intelligence reports, newly declassified military and diplomatic correspondence, and Zionist terrorists’ own records as they boast of their successes.

The hijacking of Palestine is also a story of the cynicism and lies of key figures such as Chaim Weizmann, David Ben-Gurion, and even Winston Churchill, all exposed here in their own words. Britain’s own cynical deceit in its collusion with the Zionists ultimately backfired once British stewardship was no longer needed, at which point the Zionists used the British occupation of Palestine to present their war of outright conquest as a liberation movement.

The Zionists’ relentless terrorism – the likes of which had been largely shoved down the memory hole – is meticulously documented. It targeted anyone in their way: the British who had helped establish Zionism, Jews who opposed the Zionist agenda, and of course the Zionists’ ultimate obstacle, the Palestinians themselves. Far from being isolated atrocities by rogue groups, the use of terror was deliberate and sustained, carried out or supported by the same leaders who then established and led the Israeli state.

Among the myths that the book lays to rest is that the Zionists accepted the UN’s 1947 decision to partition Palestine. Partition was proposed in full knowledge that the Zionists would never abide by it but went along with it simply to establish a state. Indeed, it was fear of Zionist terrorism that led the UN to “give” Israel a disproportionately large tract of land in its mapping of Partition.

In another unexpected twist, Suárez provides compelling and previously unknown evidence that the most notorious assassination of the period – that of UN Mediator Count Folke Bernadotte in 1948 – was not the work of the terror gang Lehi, as posterity tells us, but of the Israeli state itself, squarely placing Israel as the active heir to the decades of pre-state terror that had brought Palestine to its knees.

Perhaps most crucially with respect to opening the eyes of the Western public, Suárez exposes the state as a fraud, fundamentally and on its own terms: despite its self-anointed identity as “the Jewish state,” he demonstrates that the Zionist movement and the state it spawned consistently worked against Jewish safety and dignity, instead exploiting them for the sake of the racial-nationalist settler state.

In short, the book proves to the outsider what Palestinians have always known firsthand: that Israel’s theft of Palestine and its regime of apartheid and ethnic cleansing are not the result of  complex historical circumstances, but the intended, singular goal of Zionism since its beginning.

As Dr. Salman Abu Sitta, president of the Palestine Land Society, described the book, “Palestine Hijacked is singularly powerful … an eye-opener, a must-read to clear the fog of deliberate deception used to shield Israel’s crimes against Palestine.”

Thomas Suárez, a musician by training, is a history researcher whose previous books include three on Palestine and three on the history of cartography. A former West Bank resident, he taught violin at the Edward Said National Conservatory of Music’s Jerusalem branch and was to assume the same post at the Gaza City branch, but the conservatory was never able to get him past the Israeli siege.