By Simon Awad
and Bashar Jarayseh

Birds have inspired mythologies and religions throughout history and been rendered in drawings, poems, mottos, and social beliefs that have played a role in forming the folklore of many cultures and societies. The eagle is associated with a positive image and serves as a symbol of pride and strength. Adopted in most Arab countries as well as in Palestine as a symbol of the state, it is also the main emblem in most communication and postal systems worldwide. Other birds are not associated with such positive images. The owl is among the most popular birds in human heritage and is considered a symbol of wisdom and optimism, on the one hand, especially in Indian folklore and most Western cultures. On the other hand, and in most African and Middle Eastern cultures, this bird is deemed a symbol of death and associated with bad luck. In Palestinian folklore, owls are believed to bring bad luck. In addition, many Arabic proverbs mention owls as a sign of doom, for example, “Like the shriek of an owl that foretells disaster.”

Owls are considered nocturnal birds of prey that are active primarily at night, but some of them continue to be active during the day as well. Owls in general are characterized by their large heads, round bodies, and camouflaged plumage. They are carnivorous and primarily hunt rodents, insects, and birds, though they occasionally eat reptiles, such as lizards and snakes. They catch their prey by launching a rapid surprise attack, and with the aid of their extraordinary hearing and vision, they can locate the prey accurately even in the dark of the night. Moreover, owls have special structures on the edge of their primary feathers that reduce the sound of air rushing over the surface of the wing feathers, enabling them to fly silently. Owls’ heads are perfectly adapted to facilitate their senses. They have elliptically shaped facial feathers to collect and direct sound towards the ears, big eyes located at the front of the skull, and a neck that is able to turn 270 degrees. All these features make owls very specialized and successful for life at night.

In Palestine, ten species of owls have been recorded. Today, nine of them are still present in the Palestinian environment after the extinction of the Brown Fish Owl (Bubo zeylonensis). These species represent six genera and two families. Environmental Educational Centre (EEC) researchers recorded all owl species and ringed (band) five species. The following are some characteristics of owl species found in Palestine. 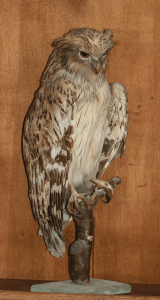 Brown Fish Owl (Bubo zeylonensis): A large owl with a flat broad head, mostly brown in color with pale streaked underparts. It hunts fish from rivers or lakes by a sudden attack from a perch or by flying low over water with its legs dangling. Before its extinction in 1975, the Brown Fish Owl used to live in wetland habitats in the north of the country. The EEC’s Natural History Museum has a rare specimen of this species. 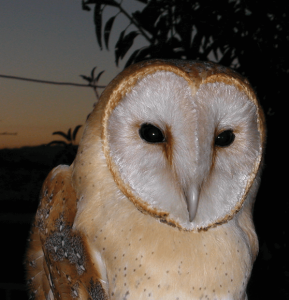 Barn Owl (Tyto alba): It is the only species representing the Tytonidae family. It is an elegant medium-sized bird with a distinctive white heart-shaped face, white underparts with black spots, and brown and grey upperparts. It feeds mostly on rodents, and it is estimated that a pair of Barn Owls consumes more than 1,000 rats a year. Therefore, many projects focus on using Barn Owls in biological pest control in agricultural areas. The Barn Owl is resident mainly in the north and center of the county. It prefers open fields and cultivated farmland with scattered trees, and it rarely resides in mountainous areas. 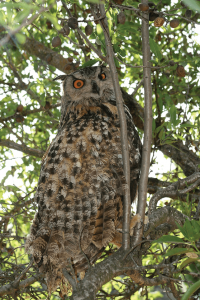 Eurasian Eagle Owl (Bubo bubo): A huge owl that is between 59 and 73 cm in length, with a wingspan that reaches 170 cm, it is considered the largest owl species to be found in Palestine. It preys on rodents, hedgehogs, hares, and some birds. The Eagle Owl is an uncommon resident in the Mediterranean climate, rare in the desert and semidesert areas. It inhabits rocky slopes, valleys, and farmlands. It is one of the species that is most affected by the illegal trapping of nestlings. 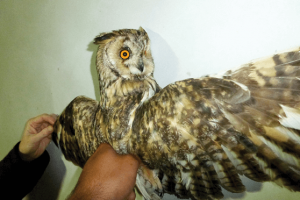 Long-eared Owl (Asio otus): A medium-sized owl with distinctive long ear tufts, long wings, and a narrow body. An uncommon resident, rare passage migrant, and winter visitor, it is observed mainly in the Mediterranean climate in the north and center of the country. 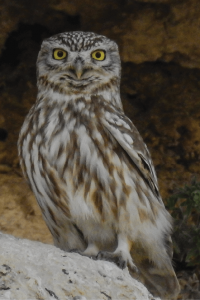 Little Owl (Athene noctua): A small and compact owl with bright yellow eyes, long legs, and a short tail, it is the most common owl species in Palestine. Its popular Arabic name is Um Quwaik. Found almost everywhere from forests, mountains, and rocky wadis to the harshest parts of the desert, it is also commonly found near humans in villages and cities. This species is partly diurnal, which means that it is often seen active and hunting during the day. 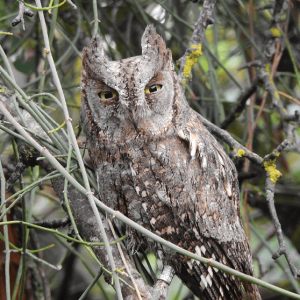 Eurasian Scops Owl (Otus scops): The smallest owl species in Palestine with a length of only 19–21 cm, it feeds mainly on insects and invertebrates. A common migratory bird in Palestine found mainly in the spring migrating season, it is an uncommon breeding summer visitor and a very rare winter visitor. The Scops Owl is observed in a wide range of habitats, from open areas and farmlands with scattered trees to thick forests and woodlands. It is very difficult to see this species because of its plumage that blends perfectly with the bark of trees where it sleeps during the day. 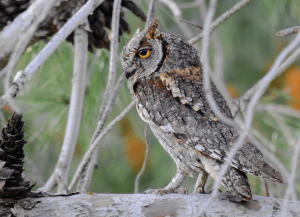 The presence of owls in nature is significant for a healthy and balanced ecosystem. They control the number of smaller rodents and insects, which are considered pests. Unfortunately, owls face many threats in Palestine, the most common of which are illegal hunting and trapping. For example, many owls fall victim to illegal hunting in rural areas, yet some people kill them to deter “bad luck,” and in the best cases keep them in cages, especially their young owlets. Another common threat that owls face is the intensive use of pesticides, which affects owls by reducing the available food resources or poisoning them when they consume prey contaminated with these chemicals. The EEC is collaborating with the Environment Quality Authority (EQA) to reduce the threats that face wild birds. EEC experts work hard on the rehabilitation of trapped or injured birds of prey after the environmental police confiscate them from people who keep them illegally. The EEC has been able to release many owls, falcons, and buzzards back into nature after rehabilitation. In addition, EEC has also been working on raising public awareness, especially in schools and in the local community, about the importance of protecting birds in general and owls in particular.