“We need to include experienced and well-educated reporters on our teaching faculty at the Media Department. Work in radio must be taught from within the broadcasting studios and editing corridors.” 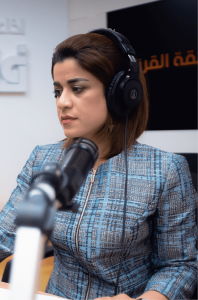 This is what the then Dean of the Department of Media at Birzeit University said in 2018 when I was selected to teach media at the university. To me, teaching at Birzeit University’s Media Department was not only a job to add to my CV or academic record but a real breakthrough in my professional experience. At that moment, I felt a sense of passion, perseverance, patience, and continuous readiness to learn. I realized that taking my profession seriously would secure recognition and appreciation not only among media outlets and institutions but also in academic establishments.

My studies were not an indicator that I would pursue a career in journalism. I had obtained a BA in political science and a master’s in international studies. However, twelve years ago, in 2008, a short volunteer experience at Filistin Ashabab magazine paved the way for me to embark on this profession.

After spending two years with the A. M. Qattan Foundation as a pedagogic researcher in human and social sciences – during which I produced many socio-educational articles and essays – I joined a leading youth magazine, Filistin Ashabab, as one of its youth volunteers. Later, the administration of the magazine came up with an idea to create a local youth radio program. I was selected along with another colleague to host the Filistin Ashabab radio program. This simple decision completely diverted my career, allowing me to delve into journalism and media work for local and satellite TV and radio stations.

I continued to prepare and host my radio show Filistin Ashabab for over five years, during which I addressed issues of interest to youth. This experience helped to qualify me  to become a lead anchor on the first radio program to focus on women’s issues in the Middle East, “Nisaa FM.” I worked there for five years as an anchor and talk-show host, meeting many senior officials and leading figures in Palestine. I started to become more confident and gained important experience that enabled me to compete with my other colleagues who I viewed as role models due to their creative media skills. My success is due to perseverance, hard work, and self-confidence, combined with an unstoppable yearning to step out of my comfort zone and learn. In addition, the help and training provided by Nisaa FM enabled me to meet experts from South Africa and allowed me to compete for advanced posts in the Palestinian journalism sector.

In early 2015, the Palestine Broadcasting Corporation proposed that I become a TV and radio show host. This offer tested my ability to work for a big enterprise and challenged me to shine among 200 colleagues whose experience was far more extensive than my own.

I made the decision to join Voice of Palestine Radio – the official government radio station – to host talk shows on social, economic, and political issues. I became one of the few female journalists to become a talk-show host on both TV and radio in Palestine. Most of my female colleagues usually host morning and recreational programs. I host TV shows on culture, primarily visual arts, the economy, and many other topics.

In 2018, I was awarded first prize at the Arab Media Festival in Tunisia for my radio talk show on women and sports. I was also selected by Care Palestine in the West Bank and Gaza as a success story and role model for their program “Kayani” (2020), which focuses on women’s success stories.

Throughout my career, I have been committed to volunteering in civil society organizations and have joined the boards of many Palestinian institutions, such as Al-Mada Association for Arts-Based Community Development and Riwaq Centre for Architectural Conservation.

Patience is the key to success. This is my motto, especially in this age of acceleration and overwhelming desire for fame among most media practitioners. Without patience it is impossible to build a solid career. You need to enjoy the journey and take your job seriously. This is how I built a career in which I went from a youth talk-show host to Birzeit University and Al-Quds University in Abu Dis to teach media with a focus on radio.