A New Biography of the Old City 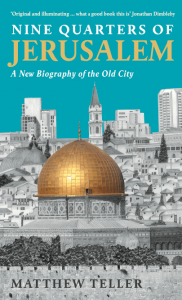 This book grew from many years of conversations with Raed Saadeh, owner of the Jerusalem Hotel, co-founder and chair of the Jerusalem Tourism Cluster, mentor, community-builder, leader, guide, and inspiration. Raed shared with me his idea for a new kind of person-centered “story-guide” to help outsiders understand Jerusalem better. He then generously encouraged me to develop that idea in new ways and new directions. Without Raed’s support, none of it would have happened.

However, Jerusalem is not my city, and never will be. Even though I’m British, and the British have claimed almost everything, I make no claim to Jerusalem. But I am lucky to have visited throughout my life, since my first trip as a child in 1980.


What became obvious to me is that Jerusalem has many more sides than two, and many more quarters than the four that appear on its maps. As a teenager, and later, I would spend time in the Old City listening to people, walking, talking, watching. Maps of the place made no sense. I could see no divisions between the Christian Quarter and the Muslim Quarter. I visited churches at the gates of Al-Aqsa, and mosques in the Armenian Quarter. As I grew older, I found pre-1948 accounts of mixed populations in what is now called the Jewish Quarter. These four ethno-religious quarters are a fiction. Who came up with the idea?


I began to research where the division of Jerusalem originated. It came, of course, from the British. But as far as I can tell, nobody before me has tracked down exactly who split Jerusalem into four for the first time, and exactly when. My book, I think, is the first to tell the story of Reverend George Williams, chaplain to the first Protestant bishop of Jerusalem in 1842. The map he annotated – falsely – is echoed today in almost every map, guidebook, article, news story, and TV report about Jerusalem.


Williams’s map lasted so long because it codified sectarian division. That suited Britain’s approach to colonial rule, and it has also suited Israel, which continues the colonial legacy. But it did not – and still does not – reflect the reality of Jerusalemite lives. For this book, and with the help of Raed and many other Palestinian friends and colleagues, including my skillful fixer Maram Summren and literary brother Khalil Assali, I have been able to amplify voices from the Old City’s Indian, African, and Armenian communities, its Dom Gypsies, its Copts and Syriacs and many others. I have traced histories of Jerusalem’s Sufis, unearthed multiple stories down the centuries of remarkable women who have influenced Jerusalem’s history and architecture, and I have even found what may be the only British-owned shop in the souk.

But I am not speaking for anyone. Palestinians have voices. They have been shouting. We – visitors, outsiders, the rest of the world – have not been listening. This book is my attempt to redress the balance, and give those voices a boost. Narratives that rely on ethno-religious division have dominated for too long, and this book simply says Jerusalem is better than that.


The fact that it is being received positively is an enormous honor. Raja Shehadeh said: “This book reveals Jerusalem better than any other book about the city.” George Hintlian, the Armenian Jerusalemite author and historian, told me, “There has been no book like this in the last 20 years.” I am delighted that the cover showcases the work of Palestinian artist Shehab Kawasmi. My aim was to evoke the Old City through stories of the people who live and work there. I hope I have succeeded.

Matthew Teller writes for the BBC, Guardian, Independent, Times, and other global media. He presents and produces documentaries for BBC Radio and is the author of several travel guides, including The Rough Guide to Jordan. His most recent book is Quite Alone: Journalism from the Middle East 2008–2019. www.matthewteller.com