Born and raised in Beit Rima, in the Ramallah governorate of the West Bank, Naseem Rimawi embarked on his musical career at the age of seven years, enrolling in classical violin lessons at the Edward Said National Conservatory of Music (ESNCM) in Ramallah. Prompted by his love of music, he took his studies seriously and soon started playing with the ESNCM Orchestra, the Ramallah Orchestra, the Palestine Youth Orchestra, and the string ensemble Palestine Strings. At that time, Naseem was the only person in Beit Rima to enjoy a musical education, so he made it his goal to spread his love of music. Dedicated to advancing classical music in Palestine, Naseem journeyed between Beit Rima and Ramallah – and had to overcome a few checkpoints in between – to share the joys of classical music. 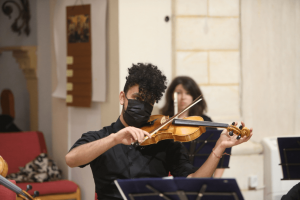 His dedication and motivation to become a better musician gradually began to take him to other countries. In 2015, Naseem received a scholarship to study in Russia at the St. Petersburg State Institute of Culture, where he played concerts with Raphael Group (that wrote and performed Russian rock songs), Glory Walker Jazz Band, the Dunaevsky Ensemble, SPbGIK Jazz Orchestra, Synergy Orchestra, and the Anton Boiarskikh Ensemble.

In 2019, Naseem joined the Filasteen Young Musicians Orchestra, the flagship orchestra of the Barenboim-Said Center for Music in Ramallah, performing in its concerts all over Palestine and Jordan. Having graduated in 2020 with a bachelor’s degree in jazz, pop, and modern music, Naseem started teaching at the Barenboim-Said Center for Music, where he combines his diverse learning experiences with his dedication to teaching children. 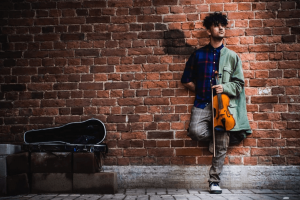 Naseem’s teaching methods and his relationship with his students, aged between 4 and 17 years old, have shown spectacular results. Even during the pandemic, Naseem’s students were able to continue their lessons through online learning and participated in Young Students talent concerts and the center’s children’s orchestra. Under his tutelage, some of his students have even gone on to win competitions.

Since he started teaching at the center, Naseem has begun integrating jazz, classical, and Arabic/Oriental music into his teaching method. Furthermore, he has introduced the center’s parents and students to a taste of jazz music through the Teachers Concert Series. The center is proud to have Naseem and considers him a wonderful example of a Palestinian student who worked hard to become the musician he is today. He is setting an example for all students and Palestinian youth in general, showing that music is not only a hobby but a way of life. Naseem will continue to share his experiences and, through his performances and teaching methods, sincerely hopes to help develop a bright local music scene in Palestine and throughout the region.