With a glass of merlot, I decided to sail on the Palestinian “sea” of paintings available on the internet when one image caught my attention and spurred genuine surprise. This beautiful painting fascinated me, triggering music in my mind: “Des pas sur la neige” (Footprints in the Snow), a piano prelude by Claude Debussy. I realized that I was meeting a very unusual painter. 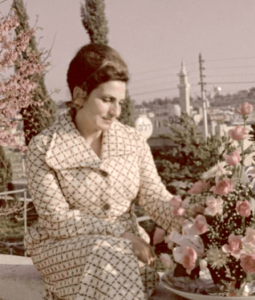 Born in Jerusalem at the beginning of the twentieth century, Nahil Bishara expressed from an early age a genuine interest and exceptional abilities in creating small and simple works of art. By the 1940s, with a family of her own, Nahil took her first steps as the first female Palestinian into the world of academic art and enrolled at the Bezalel Academy. However, she would continue to break new ground, and in 1956, Nahil continued her studies at the Accademia di Belle Arti in Perugia, Italy, where she obtained her diploma in arts. Her studies included painting, sculpture, etching, and fabric print as well as the history of arts. While in Italy, Nahil also undertook special studies with famous masters, such as Dante Falipucci, Fulgido Amori, Ricardo Leverini Mirabelli, and others.


True to her character, Nahil wouldn’t stop there. In 1962, she obtained a diploma with honors from the Chicago School of Interior Design and Decoration, studying building and ceramics as well as the technique of the famous artist Maestro Giorgio of Ceramiche Artistiche.

Nahil became an advocate for arts and culture in the city, serving on the board of trustees of the Palestinian Folklore Museum at the Rockefeller Museum. She also served on the advisory committee of Jordan Broadcasting Jerusalem’s arts department. But her contributions to Palestinian civil society extended beyond sitting on advisory committees: she also established a center for the conservation of local arts and crafts where she taught refugee students and was directly involved in the revival of factories specialized in the art of glassblowing in Hebron. Her talent as a skilled craftsperson in both ceramics and glass eventually led to her being commissioned by the Catholic Church to paint a series of scenes from the life of Saint Bernadette. Recognizing her exceptional sculpting talents, the Hashemite Kingdom of Jordan commissioned her to sculpt a statue of Pope Paul VI in 1964, during the first ever papal visit to the Holy City.

What distinguished Nahil from her contemporaries was that she did not believe in restricting herself to one artistic medium. Indeed, her ability to interweave both her impressionist-style paintings with her use of bold colors and brushstrokes depicting Palestinian folklore, landscapes, and floral arrangements and oriental-themed design and craftwork was unprecedented.

She was renowned for her expressive drawings of nature and urban scenes, where she had a particular predilection for the city of Jerusalem. Her impressionist-style paintings served to distinguish her from her colleagues. She worked across the spectrum of art, heritage, culture, and fine paintings yet maintained a steadfast commitment to society at large and to serving her community.


She was a pioneer artist and one of the first female Palestinian artists of the twentieth century to gain a formal arts education, which is evident in her abstract and expressionist paintings, unlike the realism of artists of her time. She experimented freely with different brushstrokes and techniques in the outburst of flowers and dabs of color that evoke feelings and memories of Palestinian flora and landscapes.

While not all of her works have been preserved, the ones that were can be found in the collections of the Vatican Museum, the National Museum in Jordan, Dar El-Nimer for Arts and Culture (Lebanon), Birzeit University Museum (Palestine), and Bank of Palestine.

Nahil fought for Palestine quietly, artistically, and with a refined sensibility, persistent in the face of the Zionist militias that were entering Palestinian homes. She was a Palestinian intellectual and a proud artist of international caliber. I imagine that Debussy, had he met her, would have played his famous prelude “La fille aux cheveux de lin” for her.