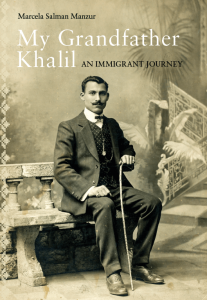 This book is an intimate account of the author’s journey to discover her identity by digging up her ancestors’ past and their struggle to start a new life in a foreign land. Researching her grandparents’ life stories helped Marcela Salman Manzur understand the significance of her grandfather Khalil’s mandate in 1904, as a young man of only 18 years of age, charged with immigrating to Chile, South America, the “continent of hope.”

Written with passion and honesty, My Grandfather Khalil exposes the enormous sacrifices and challenges Palestinians encountered as immigrants at the end of the nineteenth century. Their story is beautiful yet also sad. They faced discrimination for decades; with time, they prospered thanks to their tenacity, and the love and promises that bound them to their families, to become vital forces and valued members of the new society.

“Slowly, Khalil began to adjust to this unaccustomed way of life by socializing with Palestinian families and having no interaction with the world outside, except for what was needed to do his work. But the new country was different altogether: the scenery, the food, the people, and the daily hardships of being a foreigner. It was hard to adapt to an entirely unfamiliar society and be accepted. They were acutely aware of being an unwanted immigrant in a country where individuals did not accept them quickly, but instead were harsh and rude to them most of the time.” (From My Grandfather Khalil).


An inspiring story written by a granddaughter who departed from the land her ancestors immigrated to and fortuitously lived in the Hashemite Kingdom of Jordan more than a century later, where she discovered many unknowns. She gained in-depth knowledge of Arab heritage and customs, and was determined to find her ancestors’ century-old home, still standing in Beit Jala, Palestine. 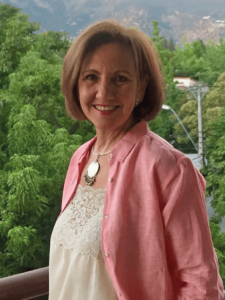 Her efforts to document her forefathers’ lives are full of emotions and pride, and should encourage others to search for and relate to their roots.

Marcela Salman Manzur is a Chilean writer of Palestinian descent. My Grandfather Khalil, An Immigrant Journey is her first published work.