Vivid memories of the Kassissieh house in Qatamon, his home until the 1948 Nakba, swarmed the mind of my late father, Jamil, often causing him to speak of it in a slow, brittle voice with loud breaths in between each heavy sentence.

One of his fondest recollections was the mighty pine tree that stood tall in front of the house. He could vividly remember touching the thick forked branches from his bedroom window on the second floor. He recalled that his father, Issa, would reprimand him and at times even forbid him from coming back into the house at late hours of the night after some mischief with his friends. Discipline reigned supreme at the Kassissieh house, and my father knew this very well. To avoid his punishment, he would climb up the tree, gently open the window, and squeeze into his room.


My father never stopped talking about the pine tree that saved him after countless nocturnal adventures. For him, the tree was a living witness to the existence of an indigenous Palestinian family that had been forced out of their home and yet still nourishes the hope that one day they will return to it and relive their beautiful memories.

My father wistfully recalled the strong bond of the Qatamon neighborhood cousins, Suleiman, Saliba, Issa, and Nasri. Looking back, he detailed how these Jerusalemite Palestinian families of the Qatamon lived in perfect harmony and had peaceful relationships amongst themselves. In early 1948, they were harassed one by one into vacating their homes and their beloved neighborhood that was quickly turning into a war zone. By the start of the Nakba, most of the Qatamon families had dispersed to different localities, on a presumably temporary basis.


“Before our Nakba” (lit. catastrophe), he added, “the neighborhood lived as one extended family, and the children used to eat at the same table, enjoying their meals. It was the duty of the mothers to alternate each day in the preparation of meals.” Sunday was considered a sacred day, where the family would gather after the church service and enjoy the mezza with Arak, a symbol of their joy and the preservation of traditions. “The family,” my father said, “lived a happy urban life in Qatamon.”

After the Naksa of 1967, my father would frequently visit the house. Standing in front of it, and knowing full well that strangers had occupied it, he would look up and mourn the fact he would never again climb his beloved tree and sneak into what was once his room. With tearful eyes, he cursed the people inside, and in a tone that was a mixture of hope and self-pity, he professed that the tree, the stones, and the ornate facade of his home would remain to speak of the oppression and displacement of the Palestinian people. My father knew well that the harm that has been inflicted on our family and many others in Jerusalem and historical Palestine will remain deeply carved in the hearts and minds of the descendants. 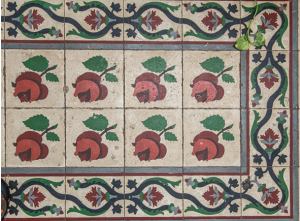 My grandfather, Issa, and his brothers used to work in the decorative carpet tile industry. The tile factory was located in the basement of our family house in Qatamon and was the most sophisticated factory at that time, housing modern machinery that had been imported from Italy in 1900. They excelled in designing and decorating houses, as well as in manufacturing elegant and lavish tiles that added to the beauty and artistic elegance of their houses and gardens. At that time, Qatamon was one of the richest and most appealing residential areas populated by Palestinians outside the walls of Jerusalem. It merits mentioning that the YMCA structure still stands as a witness of that era as a regularly frequented cultural and leisure hub of the Qatamon community. My father, along with his brothers, sisters, and cousins were active members who participated in a variety of sports and engaged in many diverse cultural and social activities.


Palestinian history is authentic and can never be forgotten, for it has left deep indelible marks on our present, giving it credibility and sustainability. Isolating the past from the present is futile because whatever we do today will become history in the future. The past and the present are inevitably blended. This is the kind of feeling I get when, from time to time, I visit Qatamon and our family’s house. I walk around, fascinated by the ingenuity of the architects who built the exquisitely embellished buildings that date back to the 1920s and 1930s and that demonstrate the level of urban progress attained by Palestinian families in Jerusalem in a short amount of time in the early twentieth century. These buildings remain a visible witness to an era of prosperity and creativity in all aspects of life. But with the Nakba of 1948, Palestine fell into the hands of strangers who replaced the indigenous population, starting a new era of oppression. My father and his brothers and sisters, along with the rest of the Palestinian population, were stripped of their rights and dignity in their homeland, and the forces of injustice strove to destroy their roots and erase their history. 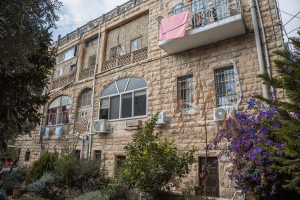 Immediately after the Nakba, my father worked for UNRWA, and until the last moment of his life he endured a persistent nostalgic and sentimental longing for the peaceful life that he lived in the Qatamon neighborhood. He used to say that the survival of the state of Israel is dependent and predicated not on the logic of power or unlimited international support, but rather on the voluntary choice of Palestinians to accept and acknowledge Israel as their neighbor, in order to allow it to live, coexist, and prosper as part of the Middle East. Furthermore, he believed that Israel’s apology to the Palestinian people must be the first concrete step toward addressing the historical injustice done to them. Such a step, my father asserted, would open horizons toward embarking on a credible process based on the principle of “live and let live.” The 1967 Green Line, drawn by the international community, constitutes a territorial divide that, if respected, would make possible the realization of a Palestinian state and restore the basic rights of the Palestinian people who suffered for a long time and who are still suffering from homelessness and the denial of their rights.


In this context, I can speak about my generation as representing the present, with the prevalence of national identity, perseverance, and struggle to live with freedom and dignity in the state that international legitimacy drew within the borders of 1967. Our dream is to maintain and strengthen our Palestinian national identity and live as free and dignified individuals in our homeland. Be that as it may, the Israeli policies and its military machinery have erased the last remaining thin line of hope, drawn by the international community, to realize the two-state solution based on the 1967 borders, which constitutes a historic compromise. (Yes, it always burns me to stress that this partial restoration of Palestinian rights involves Palestinians giving up 78 percent of their historical land. In fact, this restitution of rights constitutes a historic reconciliation by the Palestinian leadership to reach to a comprehensive and durable peace.) It is my fear and belief that with every second wasted, the two-state solution is being eroded further. Consequently, our subconscious mind transcends international consensus and aspires to return to the homes of our ancestors in Qatamon, Jaffa, Akka, and other places. The formula of “Greater Israel” will be challenged by “historical Palestine.” No matter the acuteness of oppression and injustice in this Holy Land, the power of reason, justice, and truth will triumph over the forces of evil.


It is my hope that my children will live a quality life, based on freedom and dignity in a house of their own in a state of their own called Palestine without any fear of further expulsion.