A Blend of Diligence, Nationalism, Wisdom, and Commitment 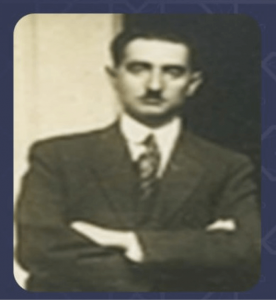 In a beautiful region south of Haifa, in the little, peaceful town of Ijzim, the Al-Madi family had its home. This well-known and influential family was strongly committed to ensuring the well-being of the town’s population in the nineteenth and twentieth centuries, until the fall of Ijzim and the expulsion of all its inhabitants in the summer of 1948 by Israeli Zionist militias, which then became known as the Israeli army. The family had prestigious positions in Haifa and Acre, too.

Mu’in was born into this family in 1887. They took great care in raising him, and sent him first to the prestigious Al-Rashidiyyah School in Haifa, then to the Royal College in Istanbul during the period 1908–1912.

Early on, Mu’in showed a remarkable ability to hold administrative positions during the Ottoman rule. The young Mu’in was well educated and well connected to both the Palestinian people and the Ottoman administration in Istanbul. His wisdom in governance enabled him to provide security and development not only as a mayor of Acre, but also as district governor of Banyas. He provided help to many Palestinian civilians who were imprisoned and even saved many who had been placed on death row by the Ottoman ruler. As a result of these efforts the Ottomans transferred him to work in Beirut. He was arrested more than once for his commitment to the Young Arabs’ Movement (founded in 1913) and managed to convince the Ottoman police that he was not involved in Arab nationalist activities.

Mu’in recognized that World War I would be critical to the fate of Palestine. The Zionist influx into Palestine was increasing. He realized quickly that he had to act swiftly, so he went to Damascus with close friends and co-founded the Arab Society for Palestine to lead actions against Zionist military buildup and British oppression. He represented Palestine in the General Syrian Congress that declared the independence of Syria in July 1919.

A new stage in Mu’in’s life had begun. He returned to Palestine in 1920, co-founded a legal firm with Najib Al-Hakim, and supported the Palestinian delegation that headed to London to try to thwart the Balfour Declaration in July 1921.

When I was reading about him, I realized how persistent this man from the coast of Haifa was. He acted politically and nationally correct, even endured pressures to carry out national actions under difficult situations, including British occupation oppression and lack of resources for resistance. Reflecting on such determination and insistence made me think of Mu’in’s story as being a precursor to Hemingway’s The Old Man and the Sea, even though he was a determined young man, not old, and fought the inhumane and unjust tide of events rather than the sea.

Mu’in was a truly open-minded and sincere man who believed in the importance of teamwork to achieve major goals. He co-founded a party called the lstiqlal (Independence) Party in 1932. He moved to other Arab “seas” such as Syria, Iraq, and Saudi Arabia. He led efforts to prepare for a military campaign to protect Palestine in 1936. Moreover, he led an untiring series of missions between Syria, Lebanon, and other places to negotiate a stronger commitment from Arabs and friendly powers to support the Palestinian armed struggle by coordinating and communicating with Haj Amin Al-Husseini and the Palestinian resistance fighters in the 1930s and 1940s. He continuously was harassed by the British for his political engagement. Yet, he was elected as a member of the Arab Higher Committee in 1947.

The defeat in Palestine and the collusion of some Arab leaders with the newly declared state of Israel made him resign from the committee and take refuge in Damascus after the War of 1948, where he remained until his passing in 1957.

This wise, discreet, yet very energetic Palestinian figure was a true Palestinian historic personality. I can imagine Mu’in sitting in his house in Damascus with his family, looking at his children and grandchildren with a sense of sadness and hope: Sadness because they had to grow up far from his beloved Ijzim on the coast south of Haifa, and hope that his grandchildren would inherit his diligence and wisdom. I had the privilege of seeing these traits in his grandson Mu’in junior.

May Mu’in rest in peace. History will never forget him.