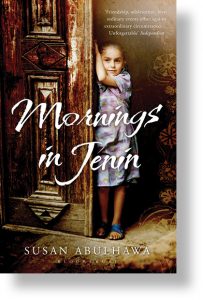 Published in 2010, Susan Abulhawa’s debut novel, Mornings in Jenin, has been translated into 30 languages and is widely considered a classic in Palestinian literature. The breadth of this novel’s readership around the world has made Abulhawa one of the most widely read Arab authors.
The story is a multi-generational saga that spans over sixty years and five countries. It follows four generations of the Abulheja family, beginning in 1942 in the village of Ein Hod, where the family patriarch, Yehya, lives with his wife Basima and their two sons, Hasan and Darwish. Both brothers fall in love with Dalia, “the no-good Bedouin girl,” but she marries Hasan, and they have three children: Yousef, who is forcibly exiled with his family; Ismael, who is kidnapped and raised by a Jewish family; and Amal, the principal narrator of this novel, who is born in the refugee camp of Jenin. Although the reader follows the story primarily through Amal’s voice, Mornings in Jenin is the story of these three siblings. Ismael is raised as David, a Zionist soldier who comes face to face with his older brother Yousef during the 1967 War. From Jenin to an orphanage in Jerusalem,
Amal gets a scholarship to study in the United States, where she struggles with culture shock and her own identity. Mornings in Jenin takes the reader through half a century of Palestinian dispossession, Israeli colonization, and an epic love story between Yousef and the woman he loved all his life. Amal, too, falls in love in Lebanon. Readers feel the love of lifelong friendships, the love of farmers for the land, the love of a mother for her children and of exiles for their heritage. Described as “Illuminating and deeply moving” by Brooklyn Rail and “lovely and heartrending” by Palestine Chronicle, Mornings in Jenin was the first “mainstream” novel to speak to the trauma of successive mass expulsions of Palestinians from their homes and lands. It has been the subject of many academic studies and is taught in universities.