Do we know what we know? When society doesn’t know something, it’s often because some power has worked hard and smart to create confusion. People assume that we don’t figure things out because we haven’t paid attention or because there is no information. Robert Proctor, a historian of science at Stanford, points out: “When it comes to many contentious subjects, our usual relationship to information is reversed: Ignorance increases.” The classical relationship between amount of information and depth of knowledge was usually proportional, until the information revolution where info-flooding became epidemic. The term “infodemic” itself rose and flourished all of a sudden in the COVID-19 era. The most outstanding language that crowned this phenomenon came from the WHO Director-General in February of 2020: “We are not just fighting an epidemic; we’re fighting an infodemic. Fake news spreads faster and more easily than this virus and is just as dangerous.” In the last digital decade, ignorance came from a suppressing power that surpasses truth – or drowns it out – “trying to make it so confusing that people stop caring about what’s true and what’s not.” Rather than what we are exposed to, is it not about how we are being exposed to info-flooding? This has become a core question in the cognitive, social, and psychological research environment. 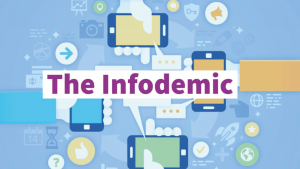 The term infodemic is highly metaphorical. And a more disciplined and scientific (sort of) term has been coined: infodemiology.*1 The term has entered public consciousness and become the new buzz word in media, scientific research, politics, and social media. The terms fake news, misinformation, and disinformation are all associated with the infodemic, and they characterize today’s digital culture, which is to a great extent a visual culture, more precisely an interface culture. We have heavily invested in developing and employing digital technologies in our societies, but much less investment is spent on the understanding of what and how such pervasive penetration affects us. The nature of digital media behavior has many blind spots on the metaphorical and conceptional levels, e.g., influencers, social engagement, mediation, social listening, attention, the controversial trade-offs between the rights and responsibilities in digital rights, and viral behavior of digital media. 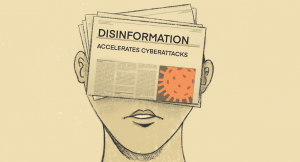 Until the end of 2019, the total number of articles on Google Scholar containing the term “infodemic” amounted to 54. As of September 22, 2021, this number has increased to 9,860. While these numbers cannot claim to be representative, they do provide some indication of the general salience of the term and its use in academia as well as in media publications.

The entire digital universe reached 44 zettabytes at the end of 2020,*2 meaning that there are 40 times more bytes than there are stars in the observable universe, resulting in double the amount of data in the digital universe every 2 years. It is estimated that for every person on earth, 1.7 MB of data is being created or secreted every second.*3 The Palestinian community produces 4.6 TB/s and 396 PB a day. As a result of such an unprecedented flow of info-production, we are all revolving around data, information, and being online in one digital space; the infospehere. There’s a huge divide. People have been learning to trade privacy for convenience. It’s just another currency.

I don’t have official statistics on what kinds of media we consume in such an immersive medium, but many research findings point out that celebrity news and stories, strange news, scandals, entertainment videos, gaming, and provocative info-spots take up most of the bandwidth that we consume. Notice the term “news feed” in social media platforms! We literally consume, not read. Reading is a decision-making process according to Marshall McLuhan, a digestion process, while we often swallow digital media content. Youngsters and teenagers are the major social capital in this huge industry. Excessive social media usage shows what has become known as social media fatigue. “In other words, there is a tendency to back away from media consumption when there is too much content in their social media feeds.”*4 This tendency is referred to as “distraction sickness,” where our brain has never been so occupied, so insistently, by so many different subjects. Just look around you.

Van Dijk, a famous theorist in digital sociology (who initiated the term “Network Society”) argued that the more information that is available may actually leave individuals with less knowledge all together. There is not enough time for an individual to process info-flooding in digital networks. Having access to that quantity of information in our close reach may not necessarily increase the quality of what we know. Van Dijk notes: “It may result in individuals knowing little about much and not truly understand and question their existing knowledge.”

We have predicted a luminous Information Age. But it appears that what we’ve got is a disturbing Misinformation Age. Fake news detection on social media has become a real concern; noticed by a burst in emerging research that focuses mainly on detecting and confronting methods, including AI-driven technologies and Big Data Analysis techniques. The existing detection of simple algorithms from traditional news media is ineffective – and sometimes not applicable – in dealing with evolving faking mechanisms. Again, taking it as a general indicator, Google Scholar shows 115K results on “fake news,” 300K on “misinformation,” and 117K results on “disinformation.” The post-digital does not describe a situation, condition, or event after the digital. It is NOT a chronological term but rather a critical attitude and philosophy that inquires into the digital world, examining and critiquing its constitution, its theoretical orientation, and its consequences. In particular, it addresses the conditions of digitality and the ideology of digitalism.

Most of the infosphere content is processed and manipulated by apps. This, in itself, for the majority of the community is a blind spot, a black box –  the highly esteemed and “holy” algorithms and software taking the “God-Mode” situation. Tech firms regularly sue geeks who reverse-engineer their code to look for flaws. They want their customers to be ignorant of how their apps work. Knowledge is being diluted on a mass scale. This is mainly driven by what has become known as the post-facts societies. We are arguing about what a fact means. Debates are heavily loaded with scientific research findings; Google is doing very well here. “If we argue about what the facts are, it’s agnotological*5 Armageddon, where reality dies screaming,” as Mango stated in True Enough. More generally, the term agnotolog also highlights the condition where more knowledge of a subject leaves one more uncertain than before. More information tools to combat agnotological rot are severely needed. Wikipedia, for example, is one great example of a well-constructed information tool that encourages users to build very good knowledge through consensus. We need more information tools like this one.

*1 This term was coined in a conference hosted by the WHO in July 2020, which aimed to advance and “defin[e] the scientific discipline of infodemiology and establish a community of practice and research” around “infodemics.”

*5 Agnotology: The study of deliberate, culturally induced ignorance or doubt, typically to sell a product or win favor, particularly through the publication of inaccurate or misleading scientific data.