The chicken succumbs in oven temperature, and the rice plumps expectantly on top of the stove. He washes moloukhiyeh leaves methodically, caressing them tenderly with his hands, before pulling them close to chop them mercilessly into a fine pulp. The broth bubbles behind him reaching a precipice. He turns to soothe it into a simmer. It whispers under his stir as he twirls bay leaves and a sliced tomato into it.

He cuts into the leaves; his body vibrating with every swish of the knife. The muscles in his arms bulging from underneath his shirt, his face clenching with anticipation. He picks up the moist leaves and sprinkles them into the gurgling broth, as they sigh into heated surrender. He washes the lemons, and halves them. He sets them onto a plate and places them on the ornate dinner table.

The sound of her key turning in the door sends him into a frenzy. She walks in looking like a vision, a warrior coming home after a long battle. He hands her a tall glass of something cold, she accepts in surrender. He registers the rise in his heartbeat at the sight of her smile and the knot in his stomach at the glimpse of her very sad eyes. She steps out of her heels, gets out of her jacket and sits at the table.

They eat in silence, searching for satiation with every mouthful of buttery chicken and lemony moloukhiyeh, but satiation never comes. Hunger is a relentless monster, food only keeps it at bay. He starts to ask about her day, but stops himself. Her eyes are cloudy and sad, and the answer to his question is there. So he eats quietly. She helps him with the dishes and pours two cups of fresh coffee for both of them. She looks at him from underneath her lashes, she wants him to hold her in his arms again. All he does is avoid her eyes. This is how it is these days, sad, quiet, and cold.

They sip coffee in the garden, swinging gently on their swing. He does not reach out to her, he sits beside her, with no other intention but to drink coffee. She cradles her empty belly. Six weeks ago it was round and full of life. Finally, the monotony they lived was going to be broken. The moment they found out about the baby, the house became more cheerful. They smiled more, they kissed more, and they said I love you more. She felt alive as life grew inside her. He returned from work early and spent the evenings at home. Then, the pregnancy ended as unexpectedly as it started. Today, her belly feels cold and flat. It is empty. She massages it hoping to feel a returned kick, a flutter of the arms, but nothing. Instead she feels moloukhiyeh expanding in her stomach trying to fill the emptiness of her abdomen. However, her hunger, their hunger is perpetual. A monster fed on questions like Who has the problem, you or him? When will you try again? Yulla hurry, we want grandkids running around the garden. You waited too long to get married, you are too old for my son. He should have married a younger woman. You should gain weight, you should lose weight. Or worst of all, are you letting him near you enough at night? It is certainly not him. It must be you.

She endured the accusations, the interrogations and the suggestions that came in the form of orders for years. She met every question with an internal twisting pain, an external frozen smile, and a robotic nod. She worked more, cooked more, lost weight when she gained it, gained weight when she lost it. Ate more vegetables, drank more water, tried herbal tea, and cut coffee. She did yoga, gave up running, took up running, and gave up yoga. She was a pendulum swinging from one end to the other, hoping to finally hang still.

He always stood up for her. He stood between her and the questioning gazes of family members and friends, but this last miscarriage was too much even for him. It devastated him. Not only was the loss of the baby after almost six months of term a lot to endure but even worse was watching her go through it all. She braved the induced labor, she pushed hard, and instead of life, death came out of her, all bloody and wet and silent. There was no sweet child’s crying to pierce through the delivery room, only her painful screams and infinite tears. 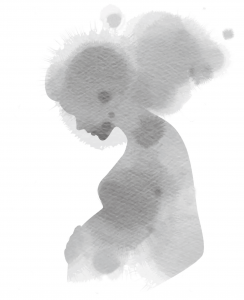 He wanted to be strong for her, but it was just too much to bear. This time Lama was quick to get back to work. It was he who could not bring himself to return to the office. So he took some time off thinking that it could help him. Instead, it just made things more pronounced. The hours crawled their way from dawn to dusk. And with every hour screeching forward, his mother’s comments only made time heavier and more suffocating. As soon as Lama was back to work, and he was still at home, she stopped by every morning to perform her tirade. What are you waiting for? She is no good for you. I can find you any woman you want. Look at you, rich, handsome, from a good family, many girls would marry you and give you not one child but ten. He met every sentence with quiet nods. He watched his mother swell with hope as he nodded. And every time she ended the speech with the question, “Shall I make an appointment for us to meet…?”

“La yumma, I am married already.” He cut her off. She would then spiral into a long ritual of “What have I done wrong in my life, ya Allah, to deserve such a bad son? Why won’t he give me grandchildren?” Eventually, she got tired, drank her coffee, and walked back up the stairs to her apartment where she came from. She eventually stopped coming in the morning. She kept to her apartment upstairs and just gave disapproving looks to both of them during family gatherings. He continued to ignore her stares and nursed the brewing failure inside him. He felt that he had let Lama down, that the basic thing that a man could do with a woman, procreate, had eluded him. It did not matter how successful he was and how envious people around him were of the life he led. He felt that he had failed at the one thing that God gave him naturally, the basic tenet of manhood, giving a woman the opportunity to become a mother.

Lama told him over and over again that there was more to womanhood than motherhood. And that there were many marriages that were full of love, that lasted a lifetime without children. They were full of travel, excitement, and pleasure and incredible companionship. She tried to explain to him that he was still her man to love and hold forever. But, Samir was inconsolable. He had become distant, cold, and quiet. The fire he had had for her seemed to wane.

Now they sit on the swing sipping coffee in silence, heavy and tense. How many times does she have to remind him that they need each other? She misses the woman she became when he looked at her. She misses the laughter, the joy, the jokes… She misses living, truly living with him… And then without prior warning, she leans towards him. Her body swells with hope like rice swells with steam. He opens his arms and just like that, the frozen silence between them begins to thaw like frozen moloukhiyeh leaves sighing at the warmth of hot chicken broth. He leans in towards her for the first time in a long while. Somewhere in heaven, the soul of a baby smiles as she finds a new home.