The experience of Mohammed Alhaj is typical for many Palestinian artists, which has implications for the status of contemporary art in Gaza. This small area does not exceed 365 square kilometers yet is a locus for numerous economic and political complications. Gaza has suffered from two wars in the last decade, and, most importantly, under siege has been almost entirely disconnected from the other Palestinian cities, the Arab World, and the world. 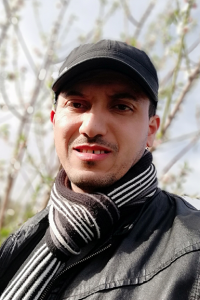 The son of refugees displaced from the village of Kawkaba during the Nakba, Mohammed Alhaj was born in Libya in 1982. He returned to Gaza in 1995, where he finished his schooling and obtained a bachelor’s degree in art education from Al-Aqsa University in 2004. The works of Kamel Al Moghani, Ismail Shammout, Suleiman Mansour, and other great Palestinian artists strongly influenced him. Yet like that of any young artist, Mohammed’s artistic practice explored various schools as he moved from abstract painting to other expressive styles, tackling local issues in his choice of subject matter. He was passionate about experimenting with different materials and techniques and keen on including Palestinian heritage symbols in his various artworks.


In recent years, Mohammed’s interest and research have focused on topographical maps. Inspired by his father’s descriptions and poignant memories of his hometown of Kawkaba, he aims to create relationships between these maps and the demographic expansion of the population, thereby illustrating the transformations caused by the 1948 Nakba in which many Palestinian were forced to leave their homes and have remained displaced.


The temporal dimensions have a strong presence in the virtual remedy for the fate of deserted Palestinian villages whose inhabitants have left, leaving no traces or remains and carrying with them nothing other than memories. The artist thus makes visible the topographical and demographic changes that result from a political reality whose effects we are still witnessing today. These works pose questions about the fate of this village that is representative of many villages that have been exposed to similar conditions.


In his last exhibition, titled Displacement, Mohammed broadens his view and poses questions about the fate of places and people in the entire Arab region, as many have been forced to leave their homeland in the last decades in search of safe and suitable locations, far from conflicts.

Since 2007, Mohammed Alhaj has participated in many solo and collective exhibitions, both locally and regionally. For more information, please visit his page on traces at https://gazatraces.wordpress.com/mohammed-al-haj/.