A Journey of Struggle, Persistence, and Success

Najat Mahmoud Ermely, a political and community activist, began her journey of politics and community work in an environment filled with challenges. This, however, did not stop her from persevering as an activist in the Jordan Valley, the most marginalized area of the West Bank. 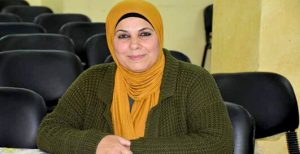 Today, Najat, born in 1968 in the Ramallah-area village of Ni’lin, is the mayor of Al-Dyouk village, where she lives with her family of four sons, two daughters, and nine grandchildren. Her domestic duties, however, never stopped her from striving to better herself. She has participated in training courses and local and international conferences to realize this goal. “I have never been convinced that my role in society is confined to being a mother or a housewife,” she says. “I have sought out many avenues to realize my goal of becoming a productive woman and activist.”

In this spirit, Najat offered a room in her house to the newly formed local branch of the Rural Women Development Association for one year in 1995. In 1996, the association opened an office in the village, which allowed her to head the local Women’s Club for six years. But Najat’s ambition did not stop there; she dived straight into public life by running in the 2005 village council elections – and winning. Najat then established and headed an agricultural cooperative that serves village farmers; she set up a kindergarten, volunteering as its director, and founded a women’s charitable association that serves the villages of Al-Dyouk and Al-Nuweima, aiming to create alternative employment opportunities for women who would otherwise only have the option of working in Israeli settlements.

In addition to her community work, Najat was a member of the women’s department in the Palestine Trade Union Federation, served in Fatah’s organizing committee, was a founding member of the Social Accountability Network in the Arab World, and served as a board member of the Tekiyeh Nusseibeh Al-Mazniyeh that provides meals and food packages for the needy. Most recently, she served on the Coronavirus Emergency Committee.

Since 2010, Najat has been working with the Palestinian Initiative for the Promotion of Global Dialogue and Democracy-MIFTAH, initially establishing a coalition of Jericho and Jordan Valley institutions for the implementation of UNSCR 1325, an endeavor, she says, that is the product of MIFTAH training sessions. These sessions also helped Najat and her colleagues launch initiatives on women’s rights within the scope of Resolution 1325. In 2013, she was employed by MIFTAH as a field coordinator for Jericho and the Jordan Valley, working on MIFTAH’s elections support program, focusing on women’s political participation, and engaging in several other awareness-raising and economic-empowerment programs for women. 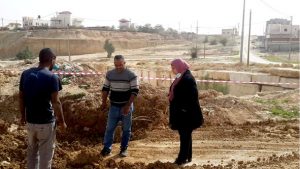 Najat’s work as a member of the town council of Al-Nuweima and Al-Dyouk has not been without challenges, but she maintains that she has faced them head on. After the council was dissolved due to internal issues, a caretaker committee was formed, and she was one of the five people on the committee. What’s more, the residents, tribal representatives, and official organizations, most of them men, agreed to appoint her as the head of the municipality. Najat maintains that her most significant success was reaching this decision-making position. “I was accepted by everyone and, more importantly, the people of my town trusted that I could change their circumstances,” she explains. “Since I took office a few months ago, I have been doing my best to resolve the townspeople’s problems as soon as they occur and to improve their basic services.” Her successes include collecting citizens’ debts and securing a 50 percent deduction on water bills from the Palestinian Ministry of Local Government. She has also employed people to work in sanitation services, which had not previously been provided, and has pitched several potential projects to the municipality.