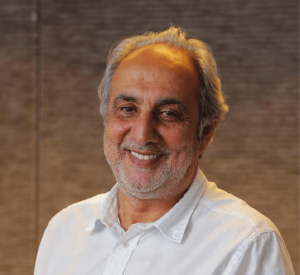 Maurice Khamis, a Palestinian from Chile, has been the president of the Palestinian Community since 2018. He is highly respected and regarded as an authentic person. Those close to him say: “He can talk with an ordinary person, a successful businessman, or a politician, and he will always be the same person.” That authenticity, coupled with a long history of working in the institutions of the community in Chile, and with natural leadership, allowed him to lead a group that achieved a great dream: to coordinate the vast majority of the Palestinian institutions in Chile under a single organization, the Palestinian Community of Chile.

Maurice was born in Beit Jala, in 1949, the youngest of four children of Helwe Massu and Ishaq Khamis. In 1952, his father, a builder, decided to move his family to Chile to join his brothers. Their father, Jadallah, had gone to Chile in the first decade of the twentieth century. Ishaq later returned to Palestine, where he bought land and a quarry in the Al-Slayeb area.

Maurice lost his father at a young age. Upon finishing school, he entered the Faculty of Economics and Business Administration of the University of Chile, where he was active in university life. After completing his studies, he began his business career, founding the company Atika, an importer and distributor of construction materials. Later, together with other members of the Palestinian community, he established a textile importing business called Trama.

Maurice participated in one of the economic landmarks of the Arab Palestinian community in Chile: Banco Osorno. In 1986, ten families from the community (Khamis, Abumohor, Abuhadba, Aguad, Díaz Cumsille, Kassis, Kauak, Rishmague, Saieh, and Selume) led by Carlos Abumohor, bought the bank, and in ten years transformed it into one of the most important in the country. Today, Maurice is the owner of MK, the largest import and distribution company for construction materials, and remains linked to the fabrics sector through the INALEN Group, owner of the leading underwear brands in Chile. He also has a presence in the real estate world through Grupo Patio, one of the main holding companies in Chile, made up mostly of families from the Community, and with activity in countries in the region.

At the end of 2000, Maurice participated in the boards of directors of the Fundación Palestina Belén 2000 (Bethlehem 2000 Foundation) and the Club Deportivo Palestino (Palestino Sports Club). In 2010, he stated that the only way to strengthen the Palestinian position in Chile is through the unity of the community. Consequently, he participated in the joint efforts of the various Palestinian institutions, especially in the political sphere, leading to common activities, such as parliamentary trips, through which more than a hundred Chilean congressmen visited Palestine, and the TAQALID festival for the Palestinian Diaspora of Latin America that first took place in Chile in 2017 and in Lima in 2019.

Maurice has four children with Liliana Jadue, and eight grandchildren. He is passionate about tennis and Arabic music, and he is famous in the community for playing the oud and dancing dabke socially.

Maurice is one of the most admired people of our community in Chile, not only by its members, but also by society in general.