Madiba stands in Ramallah, his fist raised, forever looking north and reminding people of his long walk to freedom. 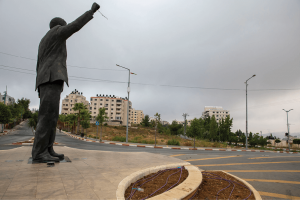 In 2016, Ramallah Municipality inaugurated Mandela Square in the Tireh neighborhood, west of the city. The six-meter-high (20 ft.) statue of blackish bronze portrays Mandela wearing a black suite, a red tie, and a green shirt, as if to symbolize the colors of the Palestinian flag. With his right fist high in the sky, his jacket rising, he’s smiling; his left hand open and relaxed at his side. 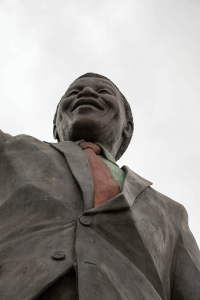 The square, as it is called, looks like an arena, with a round, slightly elevated area on which the statue is secured, overlooking an extended, open space tiled with dark grey stones. Long yellow lines surround the statue, symbolizing the years Mandela spent in prison. On the ground where the lines are drawn is a famous quote of Mandela etched in big white letters, “We know too well that our freedom is incomplete without the freedom of the Palestinians,” taken from his speech in Pretoria, 1997, for the International Day of Solidarity with the Palestinian people. 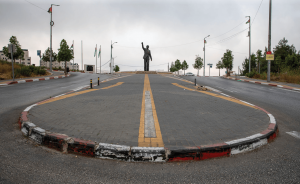 Of the famous statues of Madiba, we find the dancing Madiba in Sandton, South Africa; the 2.8-meter bronze bust outside parliament in Cape Town; a life-size bronze statue at the United Nations Headquarters in New York; another at the site where Nelson Mandela was captured in Howick, South Africa; the Nelson Mandela statue at Union Buildings, Pretoria; a six-meter statue of Madiba shadowboxing in front of Chancellor House and the Johannesburg magistrate; a two-meter bronze statue at Parliament Square, London; and a 3.5-meter bronze statue symbolizing the long walk to freedom was also erected in the international zone of The Hague. 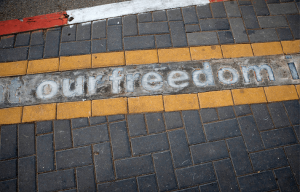 Mandela Square is located in Tireh neighborhood, a half-hour walk (2.8 km) downhill from Manara Square. Walk along Main Street (Rukab Street) and keep straight, passing Tireh Street, which boasts a wide variety of cafés. Or take a service taxi at the stand opposite Rukab Ice Cream.