By Malak Hasan and Bisan Al-HajHasan

Jaba’ is a Palestinian village in the northern West Bank, located eight kilometers southwest of the city of Jenin. This small village is rich with water springs and has an amazing view of Huriesh Mountain that is part of the broader Nablus mountain range. It is also home to the traditional and ancient pottery industry that one family has kept alive for more than 300 years. 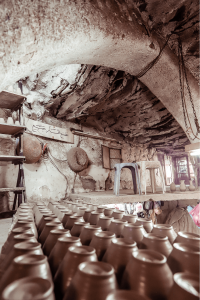 Pottery in Palestine is considered one of the oldest crafts and dates back to the fourth century BC. Palestinians used clay to store foods such as olive oil, yogurt, jam, and ghee. It was also used to serve food. The city of Gaza is believed to be the first of many Palestinian cities to have mastered pottery.

We decided to visit Jaba’, where Jamal Al Fakhouri preserves Palestinian heritage every time he models a new clay piece. To reach his workshop, we walked among the houses in the old quarter of the village until we reached an old house that has two tubs and a domed structure made of cement blocks.

The minute we walked into the house, a cool breeze replaced the high temperatures outside. We saw a man sitting in a circular pit with a revolving clay wheel under his hands. “Assalamu ’alaikum” (peace be upon you), he greeted us enthusiastically.

His smile was inviting, and we descended the stairs carefully, trying not to step on the dozen fresh clay pots neatly placed in rows across the floor in front of him. Looking up, we noted that it was indeed a traditional Palestinian house with a domed ceiling. His grandfather had bought it in 1936 after moving from the house where his ancestors had modeled clay for decades. It was clear that Jamal’s life revolves around pottery. His family is named Fakhouri, which means the potter. And he is already preparing his sons to take over the family business.

As usual, we were eager to try our hand at making pottery with a master who makes hundreds of pieces a day. I sat next to Jamal in a small hole with a seat, a wheel, and a pedal that I pressed with my foot to make the wheel revolve. Jamal told me that there are two rules to follow when making pottery: keep your hands wet, and keep the wheel turning. I dipped my fingers into a pot filled with soft clay to start modeling the clay, and I was shocked at how easy it looked but how difficult it really was.

Jamal gave me instructions on how to handle the spinning clay. The clay felt so velvety in my hands, and while I felt great living this unique experience, I knew that my performance was not up to Jamal’s standards when what was intended to be a cup turned out to be a flat plate with a hole in the middle. 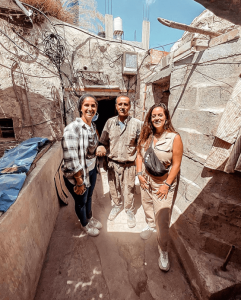 I could feel Jamal’s excitement in sharing his passion with a younger generation – as if he wanted to make sure that this unique Palestinian art would not be forgotten or abandoned. He regularly welcomes tourists and Palestinians alike to learn about pottery in Palestine. We at Ahlan Palestine encourage you to get in touch with the workshop to experience a little-known side of this beautiful country and its heritage.

Malak and Bisan are the founders of Ahlan Palestine, a travel blog that promotes tourism in Palestine. To learn how you can try pottery in Jaba’ too, contact them via their Instagram page @AhlanPalestine.