By Courtesy of Sharek Youth Forum

Palestinian society today needs new tools and methods to help adolescents and youth safely transition from adolescence into adulthood. Sharek Youth Forum works closely with the United Nations Population Fund (UNFPA) to promote gender equality and positive behavior through animation characters who serve as “virtual ambassadors” to change children’s behavior.
As the recipient of generous financial support from Belgium, UNFPA has enabled Sharek Youth Forum to develop a virtual character – a brave student – who promotes gender equality and plays an active role in standing up for the rights of women and girls. 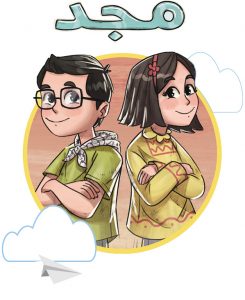 Majd (the same name is used for both the male and female characters) is our virtual ambassador, a 12-year-old who advocates for positive change in the lives of Palestinian adolescents, who number approximately two million. Majd is brave, curious, and engaged, and wants to be a healthy, educated, and active Palestinian citizen, contributing to the good of the community, promoting gender equality, and combating gender-based violence. Majd takes young people on a journey through adolescence using animated videos, a mobile application and educational diary, educational games, and theater-based awareness-raising activities, including school contests.

Many challenges occur as Majd navigates the complex road to adulthood: physical changes brought on by puberty coupled with rapid psychological development and an increased desire for autonomy and stability; peer pressure and potential harmful social norms; and many, many questions. To become a healthy and educated adult, Majd needs a supportive environment, a great deal of information, and many learning opportunities to facilitate the safe transition from adolescence to adulthood.

Majd’s long journey started in 2018, accompanying Palestinian children and adolescents through various tools and methods. This journey invites young people and others, including the media, to engage in an innovative and unconventional initiative, bringing gender inequality and gender-based violence into mainstream narratives, rather than simply viewing them as issues relevant only to women.

Majd’s journey raises awareness about gender inequality within Palestinian society and how to change attitudes towards all forms of gender-based violence; it encourages young people to challenge dominant stereotypes and promotes young men’s engagement in advocacy for gender equality while at the same time increasing young women’s awareness and empowering them to reject all forms of violence against their peers, both female and male.

Majd’s “Brave Student Diary” was developed and updated based on the “Brave Man Diary” developed in 2017 through Spanish Cooperation’s support of UNFPA. The diary focused at first on teaching boys the concept of positive masculinity and their engagement in promoting gender equality. In 2018, Majd’s Brave Student Diary was updated to raise awareness among both boys and girls on concepts related to gender-sensitive roles and responsibilities among school students and their families, teachers, friends, and others, aiming to change misperceptions and stereotypical behaviors of gender inequality associated with norms and traditions that leas to gender-based violence in Palestinian society. The diary has been used as an educational tool in selected public, private, and UNRWA schools, in partnership with the Ministry of Education, and UNRWA. Teachers and counselors have been trained on the use of the diary in order to facilitate class sessions that invite students to reflect on notions of bravery and the perceptions of gender norms and violence. Students are encouraged to talk about the value of domestic work and their mother’s role at home. They also discuss the fine line between societal gender roles and whether they can be crossed or not. Can men cook? Can women work outside the frames of the home? etc. This leads to helping these students become advocates for women’s rights and roles.

The diary is one of the tools used by teachers, counselors, and parents not only to talk about the change in understanding gender roles but also to enhance the dialogue with parents, friends, and teachers on topics that include violence and discrimination in society.

The application introduces an electronic version of the diary through games and worksheets for positive practices in a variety of situations that the child may face at home, in school, and in the neighborhood and public places. The application includes digital-security materials, animated videos, awareness-raising posters, and interactive games. Currently, more than 500 children have downloaded the application, which is currently available on Google Play under the name رحلة مجد (Majd’s Journey).

To respond to the worsening situation during the coronavirus outbreak, Majd decided to stay at home and engage virtually through an online platform under the name رحلة مجد (Majd’s Journey) on Facebook. Through this platform, various programs were introduced to keep children and adolescents engaged during their homestay. Forty-seven young volunteers worked to develop content and introduce it through a variety of means, including an online summer camp, reading competitions, health and well-being sessions, online Majd diary sessions, digital security and early-marriage campaigns, and question and answer sessions. Around 300 items of educational material (videos, posters, and posts) have been created and introduced, attracting 137,699 views and 11,150 accounts.

You, too, are invited to meet Majd and Majd and join them on their journey.
To learn more, visit the Facebook page (sharekmajd) and YouTube channel
(2020 رحلة مجد) for videos, news and events; or contact alami@unfpa.org or zamareh@sharek.ps.

Sharek Youth Forum is an independent, nonpartisan Palestinian organization that tackles development issues from a unique perspective. Sharek was established in 1996 and works to develop and empower youth as active participants in civil society and encourages them to participate in Palestinian political, economic, and social affairs. As a nationally and internationally recognized platform, Sharek provides space for Palestinian youth to come together, develop their ideas, and implement projects aimed at community development and policy change.
View PDF