Afew years ago, I attended a lecture by a German official about the reunification of Germany West and East. It was an interesting lecture that included various topics about managing the reunification and applying laws and regulations to deal with the mired problems of this undertaking. One of the topics raised was real-estate properties of Germans that were left behind in East Germany, a complicated issue that the government was trying to tackle, especially since such properties were occupied by other Germans who were not the original owners. At that time, the process involved reimbursing the original owners one way or another. But there were no laws or regulations that prevented the original owners from regaining their properties or being compensated.


In contrast, Israel established “laws” in the 1950s that designated as “absentee properties” those owned by Palestinians who were forced to leave, especially those who fled to so-called enemy countries. The Israeli Absentee Property Law of 1950 (Absentee Property Law) is the main law in a series of laws that regulate the treatment of property belonging to Palestinians who left, were forced to flee, or were otherwise deported during the 1948 War. Until now, Palestinians have been unable to recover their properties due to discriminatory laws that have stripped them of their properties and belongings. After 1967, Jerusalemites like myself were given identity cards and permanent resident status (at least in theory) but no right to recover their properties.

Recently the Israeli government was furious at Poland for instituting a law that would prevent Nazi-looted properties from being returned to their original owners. The hypocrisy and double standards are glaringly obvious. Israel considers that European Jews are by law entitled to regain their looted properties, while it simultaneously denies this right to millions of Palestinians. 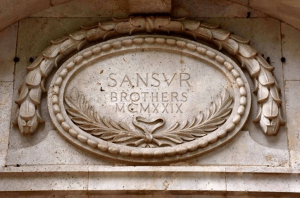 My family used to reside in the neighborhood of Qatamon in West Jerusalem. At that time, there was no East or West, but one Jerusalem. In 1948 my family was forced to leave Qatamon at gunpoint by the terrorist Haganah militia. We were among the last families to leave the neighborhood. In January 1948, the Haganah blew up the Semiramis Hotel in Qatamon. Scores of civilians were killed. The neighborhood was also subjected to shelling, and its residents began to move to safer parts of the city. Yet, Ibrahim Abu Dayyeh, who led the local resistance efforts, entreated residents to stay put, and some did. In the aftermath of the Deir Yassin Massacre, however, the Arab population of Palestine was gripped by terror. Later that month, the Haganah broadcast messages to the remaining residents of Qatamon, ordering them to leave or it would blow up their houses with families inside.

My father gathered his family in our car and eventually headed to Lebanon by way of Amman, where some of our relatives took refuge. Since he regularly vacationed in Lebanon, he told his children that this was but a trip. He thought that they would leave for a two-week period until the hostilities subsided. Little did he know that this two-week period would become indefinite. During the war, he was able to slip back to Jerusalem to salvage some of our belongings and store them at one of the nunneries in Jerusalem for safeguarding. When his money was running low in Lebanon he decided to go back to Bethlehem and try to reactivate the cigarette factory that he owned. He rented a house and gradually, over the next few years, brought his family back from Lebanon. Thus, in one day our lives were transformed – an affluent and well established Jerusalemite family became refugees.

After 1967, when the western part of Jerusalem was again accessible to us, my mother went to see her home in Qatamon. She broke down in tears when she saw that her home was being turned into a nursing facility for elderly people, and that the original design of the villa was being distorted by ugly additions. Israel is raising a storm about abandoned Jewish properties in Europe and the Arab world and wants compensation yet it denies the right of return or compensation to Palestinians.

As part of the official recognition of historical buildings in Jerusalem, the Sansur Building has a small plaque that states that it was built by Michael Sansur in 1929 and designed by the highly distinguished architect Michel Samaha, a Lebanese man who also designed most of my father’s other buildings. The building was an example of coexistence among Palestinian and Jewish tenants. The building’s Café Europe was the center of activity, where all sectors of society – including British officers –
mingled and entertained. This peaceful coexistence was shattered due to the hostility of Zionist terrorists who refused the right of others to exist.

There is much to be said about the loss of home and country, the scattering of a community, and the loss of a way of life that we Palestinians suffered in 1948, but I want to celebrate my father’s life achievements, achievements that 1948 and Israel’s racist laws stole from him.

My father grew up in Bethlehem. Around 1911, he and his brothers emigrated to El Salvador to search for work and to avoid Ottoman conscription. Through sheer hard work, they succeeded financially and eventually made their fortune in El Salvador, like many other Palestinians in the Americas.

After the British Mandate was set up in Palestine, my father came to visit his parents in the mid-1920s. Palestine was at the beginning of an economic boom, which interested my father. At the same time, he fell in love with my mother, Rose Jacob Jammal, who was living in Jerusalem. They decided to get married and briefly lived with my grandparents in Bethlehem while exploring the possibility of investing in Palestine, mainly in Jerusalem. Many Palestinians from Bethlehem were building their homes in the Jerusalemite neighborhoods of Qatamon, upper and lower Bak’a, and Talbiyeh.

My father and his brothers decided to leave El Salvador and invest heavily in real estate in Jerusalem. My father bought several plots of land and developed them. His properties in Jerusalem include the famous Sansur Building at the intersection of Jaffa Road and Ben Yehuda Street, the Greek Consulate in Qatamon (originally the Royal Egyptian Consulate), and the Italian Consulate, as well as other apartment buildings that he rented out. Our family home was also in Qatamon, as mentioned earlier. However, it was the Sansur Building that was his greatest pride. Designed by a distinguished Lebanese architect by the name of Michel Samaha, it stood as Jerusalem’s largest and most prestigious commercial building.


In addition to these, my father also established the Sansur Cigarette Company in Bethlehem, as he had had experience in the tobacco industry back in El Salvador. He also owned an orange plantation in the now-demolished Palestinian village of Saqiyah close to al-Lydd Airport. Its high-quality produce was exported to England. After 1948, my father often took us to a hill in Beit Jala to show us from a distance the neighborhoods where we and our relatives lived. He was sad but he showed remarkable resilience, telling us that “he makes the money but the money does not make him.” God rest his soul, for he was always optimistic and hopeful that justice would prevail and that we would eventually go back home.

After 1967 he would take us to Jerusalem and show us the wonderful buildings that our family owned, in particular the Sansur Building in the heart of Jerusalem’s commercial district. He would walk around the building and show us the large masonry, which helped it acquire the nickname “Solomon’s new temple” by the Jewish residents of the city. He also told us of the challenges he faced while building this edifice. The Zionists in Jerusalem were strongly opposed to the construction, not least since my father bought the land from a British Jewish lady in one of the rare instances during the mandate period when land passed from Jewish to Arab hands rather than the opposite. This angered Zionists as it contradicted their racist aspirations for an exclusively Jewish space.

As fond as he was of this building, every time he went to visit it he returned home upset and his blood pressure would rise. He was fully conscious of the fact that his life’s work had been stolen from him.

In an attempt to try to recover some of our properties, my father took the Greek Consulate General in Qatamon to Israeli court in 1972. The court ruled that the consulate should reimburse my father for lost rent or vacate the building. Yet, the Israeli Attorney General refused to execute the ruling, ridiculously claiming that the building – rather than the diplomats within it – enjoys diplomatic immunity. This only highlights how for Israel, the justice system exists merely to apply shallow legal veneer to its perpetual theft.

To this day, the Greeks refuse to pay rent. Even when we tried to obtain justice from alternate venues within Greece, the government would hinder our attempts through bureaucracy or simply turn a blind eye to our requests. As for the Italian Consulate, it continued to pay rent to my uncle Khalil for a few years after the Nakba but then stopped. On its website, there is mention of the building and of the architect Michel Samaha who designed it, but nowhere is there any mention of the Sansur family as owners of the building. Even when this oversight was brought to the attention of the consulate, the omission was never corrected. The irony is that these members of the European Union, which often pose as defenders of international law in Palestine, seem to forget their high principles when it suits their interests.

The trajectory of my father’s life is not unique. It reflects that of many Palestinians of his generation as well as of ours, who have risen from humble origins to achieve great success, only to see their life’s work taken away from them. These injustices have never been rectified. Instead the thefts have been perpetuated by laws and lies.

Throughout the past 50 years or so there have been many articles, documentaries, and interviews about the Sansur properties in Jerusalem. One only has to search the internet to find them. Injustices cannot last forever, and one day, maybe soon or sometime in the distant future, justice is bound to prevail.