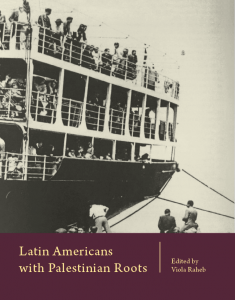 Latin America has the largest Palestinian diaspora community outside the Arab world as well as the biggest Christian Palestinian community in the world, even in comparison to the original homeland. Palestinian emigration to Latin and Central America is considered one of the earliest in Palestine’s modern history. In the late nineteenth century, many Palestinian Christians took boats and mules alike to reach opportunities on the continent of America. Dar al-Kalima University is proud to be one of the first universities to invest in researching Latin America’s Palestinian roots.

Latin Americans with Palestinian Roots, a book edited by Viola Raheb, represents the first attempt to shed light on the historical and current Christian Palestinian presence in Latin America, with special focus on Honduras, El Salvador, Nicaragua, Guatemala, Costa Rica, and Chile. The five articles in the book cohesively outline how Palestinian Christianity has interacted with and continues to influence Latin American societies politically, socially, and economically. Included in the book are: Sisters and Brothers in the Diaspora: Palestinian Christians in Latin America by Viola Raheb; The Formative Stages of Palestinian Arab Immigration to Latin America and Immigrants’ Quest for Return and for Palestinian Citizenship in the Early 1920’s by Adnan A. Musallam; Political Participation and Economic Success of the Palestinians of Christian Origin in Central America by Roberto Marín-Guzmán; Palestinian Diaspora in Central America – A Story of Hardship and Success by Manzar Foroohar; and A Century of Palestinian Immigration to Chile: A Successful Integration by Nicole Saffie Guevara and Lorenzo Agar Corbinos.

Nicole Saffie Guevara and Lorenzo Agar Corbinos, in their article A Century of Palestinian Immigration to Chile: A Successful Integration, describe Palestinians traveling to Latin America:

“The journey was hard. The migrants had to buy a third-class passenger ticket or board cargo ships, where they were accommodated in between luggage. Despite the precariousness of the journey, however, this time allowed them to establish contacts and obtain useful information on their destination.”

Guevara and Corbinos detail the challenges of getting to Chile:

“There was a daring group of travelers who decided to go to the end of the world: Chile. That crossing was a challenge. It began in the city of Mendoza, Argentina, in the foothills of the Andes, where the adventurers had to wait for the weather to settle down before crossing the mountains. Then they undertook the journey on mules, challenging for about four days dangerous cliffs and the cold Andean Mountain range in order to reach the city of Los Andes on Chilean soil.”

Guevara and Corbinos continue with Palestinian integration into Chilean society:

“One can see here an increased integration of Palestinians and Arabs in general in the Chilean society. At the same time, however, there is still interest in maintaining and safeguarding their identity, as well as in preserving the values and customs handed down from generation to generation. That is to say, the paradox of our globalized world is on the one hand, to share as a whole, but on the other, to differentiate oneself from another. This was the case for those with Arab roots.”

The in-depth narratives, comprehensive research, and insightful discussions together create an example of excellent academic work in Raheb’s Latin Americans with Palestinian Roots.