Born in 1965 in Hebron, Khaled Hourani is a prominent Palestinian artist who lives and works in Ramallah. As an artist, writer, commentator and curator, Khaled is a critical voice in Palestine. Operating within a socially and politically constrained system, he conveys his acute awareness of the nuances and vagaries that permeate different aspects of social encounters in Palestine. 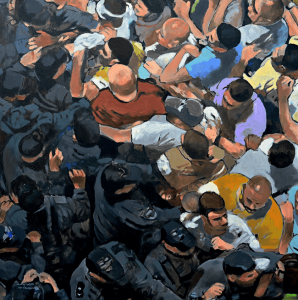 
Known also as a notable art critic, writer, and curator, Khaled has overseen many exhibitions in Palestine and abroad. Thus, he was the initiator of the 2011 Picasso in Palestine and the Stone Distance to Jerusalem projects. In 2014, he organized his first retrospective at the Centre for Contemporary Arts in Glasgow and at Gallery One in Ramallah, followed by another retrospective exhibition at Darat al Funun, Amman, Jordan, in 2017. Moreover, he has participated in numerous exhibitions, among them the Sharjah Biennial, 2011; an exhibition at the Times Museum in Guangzhou, China, in 2012; the 2nd CAFA Biennale in Beijing, 2013; DOCUMENTA (13) in Kassel, Germany, in 2012; KW Institute for Contemporary Art in Berlin; Catastrophe and the Power of Art at Mori Art Museum, Tokyo, 2017; and Picasso and Spanish Exile at the Museum of Modern Art, Toulouse, France, 2019.


In 2013, Khaled was awarded the Creative Time Leonore Annenberg Prize for Art and Social Change, in New York City.


His most recent solo exhibition, titled Leaping Over the Barrier, opened at Zawyeh Gallery Dubai, on September 19 (and runs until November 3, 2022). Khaled explains being drawn to the theme of the wall because “it condenses the meaning of ‘occupation’ and continues to disrupt our lives, growing taller not only in Palestine but also elsewhere in the world.” In these works, he tries to remove and transcend the wall through his paintings. 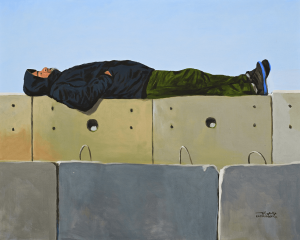