Born in Haifa, Palestine, in 1942, Kamal Shamshoum considers himself blessed to have briefly enjoyed one of the most beautiful cities on the Mediterranean Sea, even if only for the first six years of his life. The 1948 Nakba forcibly displaced Kamal’s family along with 750,000 Palestinians, turning them into refugees until this very day. With relatives living in the West Bank, the Shamshoum family headed to Birzeit on foot, enduring a physically and emotionally distressing trip of around 180 kilometers. 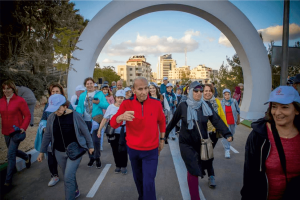 Kamal and his brother Walid enrolled in Birzeit’s Catholic Elementary School and graduated from Birzeit College (BC) in 1960. As a sports enthusiast, Kamal was involved in many sports activities and worked closely with Dimitri Khashram, his physical education (PE) instructor, who inspired him to major in this field. Dr. Gabi Baramki, the dean of Kamal’s college and his mentor, encouraged him to pursue his studies in Europe and assisted him in getting a loan.

Having completed his degree in Vienna in 1965 and returned to Birzeit University as a PE instructor, Kamal, over the years, participated in ten international PE workshops at Austria’s Graz University. More importantly, at home, he organized annual sports events, festivals, competitions, and team sports activities that were highly valued by the student body and contributed to a heightened sense of well-being among the Birzeit community.  One of Kamal’s most cherished roles was becoming the director of the BC boys’ hostel. Through this position, he developed close relationships with the students and ensured that various recreational activities were made available to develop their well-being. His work with young men and youth earned him the nickname Abu Elshabab, the father of youth. This nickname has remained with him throughout his career, right until the present day.

Kamal met and married his lovely wife Georgette in 1970. On their journey together, Kamal and Georgette decided to pursue their graduate studies while working. Despite a heavy work-study load, they ensured that their children Rami and Shadi were raised in an atmosphere full of love, culture, and education, empowering them to become good parents themselves. Today, Kamal and Georgette are the proud grandparents of four adorable grandchildren.

In 1972, Birzeit College became Birzeit University (BZU), an internationally recognized university. Soon afterward, Amideast offered Kamal a full scholarship to pursue his master’s degree at the University of New Hampshire. Upon completing his studies, Kamal returned to BZU and established the PE department. As its chairman, his first task was to develop the facilities of the department and to expand and strengthen its human resources. He composed PE booklets and publications to share the knowledge he had acquired throughout his educational journey. Soon, he was promoted to assistant professor. At the 2008 graduation ceremony, in recognition of Kamal’s exceptional work, BZU president Dr. Nabil Qassis honored him with a special BZU Honor Award for 46 years of professional contributions. Even though he officially retired in 2008, Kamal was asked to continue his valuable work at the university until 2014.

Retirement began with the imperative task of documenting his professional accomplishments in a book, and he was honored when Dr. Baramki agreed to write its foreword. Leaving Birzeit University in 2014, Kamal decided to embark on a new way of life centered on voluntary activities to enhance community well-being. Thus, Kamal served as a board member at Tamer Institute for Community Education, volunteered at the Ramallah Municipality as a health and environment adviser, and is an active member of the Ramallah City Council. Currently, he assists the retired and elderly community in Ramallah through the Forum of Expertise, a wellness program for senior citizens that aims to fulfill their physical, mental, and social needs. This is the first initiative of its kind in Palestine.

With fifty-plus years of experience, Kamal now shares his wisdom of wellness and well-being, especially among senior citizens. His key takeaway from a rich journey: Practice movement and activities that support your general health, take part in voluntary and community activities, plant a small garden if possible, establish social relationships, take part in recreational travel if possible, stay away from laziness, and, most importantly, remember that age is just a number!