Joseph Nesnas was born in Jerusalem in 1962 and grew up in the Shu’fat area that was characteristically rural at the time. It was sparsely populated, had no monorail and fewer buildings. Similar to all youngsters at the time, Joseph spent his time playing with his peers and riding bicycles on the streets. Taking a walk down memory lane, he recalls the Old City of Jerusalem as he describes the women vendors at Damascus Gate: they portrayed the actuality of Palestinian rural life at the time. One thing, however, has not changed yet: the aroma of spices and herbs in the markets of the Old City of Jerusalem.
Joseph began his studies at Birzeit University in 1981. He witnessed the beginnings of the university when its campus was in Birzeit’s old town. What he remembers most is the university’s beautiful, homely atmosphere, since students knew each other well due to their small number back then. Joseph began his professional life as a third-year student of business management and accounting at Birzeit University. He progressed through several positions, until eventually he assumed his current position of deputy general manager/regional manager at Cairo Amman Bank. This succession of roles served to multiply his diverse qualifications, which has allowed him to represent the banking sector in local and regional bodies. But Joseph’s professional journey is far from complete, as he explains, “I believe I have ample opportunity to offer more.”
In 1984, his passion motivated him to accept a night-shift accounting position at the American Colony Hotel in Jerusalem while he was still a university student. After graduation, he started to work for USAID, as part of the cooperative development project in Jerusalem. His initial role was as financial and administrative director, then later he became director of programs from 1986 to 1994. 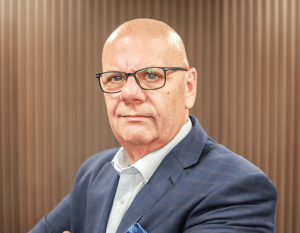 Joseph made use of his expertise in the field of development in his next role at the Arab Bank in 1994, where his work pivoted around project financing. He advanced through various positions until he became director of the bank’s main branch in Ramallah, while concurrently serving as vice president for institutional and private banking.
In 2003, he started to work for Arab Bank in Jordan, where he assumed the position of director of the Fifth Circle branch in Amman, and later became regional director of retail banking in Jordan and Palestine. He directed the efforts to establish the retail sector in an era when the vast majority of the bank’s clients were corporates. A turning point in his professional career occurred in July 2005, when he was appointed regional director at the Cairo Amman Bank in Palestine, a job that he continues to hold today.
Joseph is fluent in Arabic, English, and Hebrew, and can speak French. He attributes his linguistic skills and passion for continuous learning to his education at the Collège des Frères at Jerusalem’s New Gate. The foundations of his 35-year-long career journey were laid during his university years since he worked various jobs even while continuing to study. He received a bachelor’s degree from Birzeit University and an MBA with distinction from Boston University. In fact, while in Amman, he joined the Arab Academy for Banking and Financial Sciences to obtain a PhD in management information systems, yet he was unable to finish the last semester due to his return to Palestine. Joseph has represented the banking sector at several institutions, including as chairman of the Association of Banks for two terms and as a board member of the Union of Arab Banks, the Capital Market Authority, and the International Union of Arab Bankers, in addition to other institutions and companies. Now he is concerned with finishing his PhD, as he believes that his age is an advantage and an affirmation of his financial prowess, which stems from his extensive practical expertise in the banking sector, in which he has excelled.
Joseph has contributed to the body of knowledge on banking through several works, articles, and conferences, including his participation in the authorship of a guidebook about investment in Palestine. The two pillars of his success – working continuously to acquire knowledge and develop himself, and being proactive and exceeding expectations – also constitute the advice that he offers to youth and to those who strive for the best, especially in the Palestinian banking sector, which is growing steadily and requires expertise.
Venturing into Joseph Nesnas’s personal world, one discovers that he is a father to two sons and one daughter, all of whom are married and have children. When not spoiling his grandchildren, he occupies his time absorbing the cultural riches that Palestine has to offer. He is especially fond of artistic, cultural, and folkloric events and makes every effort to attend events even when traveling. He is also fond of boxing and trains twice a week with a personal trainer. In the past five years, he has developed an interest in Jeep off-roading, which takes him out into nature and onto mountains.
This text is based on an interview with Joseph Nesnas conducted by Firas Al-Taweel and translated by Elias Khayyo.