The city of Jerusalem is the focus of Hosni Radwan’s latest series of artworks. Using charcoal, acrylic, and gold leaf on canvas, he attempts to express his fascination with a city haunted by shades of paradoxes.

Having lived in the diaspora most of his life, Radwan fell in love with Jerusalem the minute he saw it. He was fascinated with the place, its beauty and contradictions; intrigued by the little arches and oriental style of architecture, the smells, the colors, the noises, and the unique way of living. Jerusalem brought the artist closer to safety and belonging, as it carried him back to his childhood in the old city of Baghdad (where his family was displaced in 1948). The two cities have many features in common; they appear on the surfaces of his paintings as childish sparkles, cold grey corners, small ancient white domes, golden holy places, and pink stones.


Mixing black charcoal and colorful vibrant colors, Radwan touches metaphorically on the city’s situation and accounts for its history and politics. He juxtaposes colorful areas with others rendered in charcoal in the attempt to reveal contradictions: day and night, past and present, oppression and freedom, and vibrant life and loss under occupation. The Holy City in this series is present with all its details yet seems hollow, as there are no people and very few traces of humanity at all.

In the two paintings titled City of Paradoxes 3 and City of Paradoxes 4, Radwan presents the city in vibrant colors, dominated by warm reds, oranges, and yellows. Its old houses, alleys, and small stairs are colorful, as are the little scattered windows, making the town look as if it were from a fairy tale. But at the bottom of these paintings, lonely olive trees are drawn in charcoal, which leaves the olive grove outside the city, in black and white, untouched by Radwan’s magic colorful wand. Ancient yet sturdy, the trees carry a hint of both sadness and steadfastness.


City of Paradoxes 1 divides the Holy City into two parts: one colorful and vibrant, as if it were bathing in sunlight, the other dark, with small, ancient houses and holy places that are covered by the shade of night. In the middle, a few buildings are embraced by the hues of dawn or dusk.

The intensely red skies in the diptych City of Paradoxes 5 are distinctive. The Old City seems tranquil, as it never is. Radwan mixes charcoal and acrylic. A deep red hue carries the city to a calm, peaceful geographical realm that exists only in his imagination. The houses with their stairs, alleys, and arches are drawn in charcoal, yet their windows beam with red and orange colors, similar to the sky, as if reflecting it. The sense of safety and belonging is palpable in the painting’s homely, warm atmosphere that radiates from the tiny windows and doors. 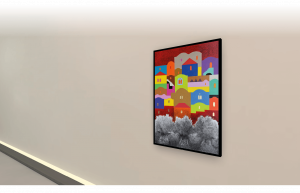 In City of Paradoxes 2, Radwan divides the painting into blocks that are then shuffled around. As if he were asking the viewer to shuffle them back, the charcoal blocks mix with the colored blocks, forming an intriguing work.