While the future is what matters most to us all, it is important to understand the past. History, after all, carries with it a certain responsibility to affect the here and now – to do better. That is the thinking behind the Balfour Project*1 charity: not to defend Balfour, nor to rewrite the past, but to accept responsibility where it is due, and to advocate for better.


Field Marshal Edmund Allenby entered Jerusalem on foot through Jaffa Gate at noon on December 11, 1917. According to a report of the event, the citizens of Jerusalem were at first welcoming, because they were glad the Ottomans were gone and they wanted a good relationship with the British. They were also cautious, as they did not want the British to stay. Their caution proved justified: stay the British did, governing Palestine until their retreat in May 1948, leaving chaos, war, and enduring injustice in their wake.

Britain was the power in the land for over 30 years; through military occupation and through the Mandate that it sought and acquired from the League of Nations. The month before Allenby set foot in Jerusalem, British Foreign Secretary James Arthur Balfour had made his fateful promise – the Balfour Declaration, addressed to Lord Rothschild and the Zionist Federation:

“His Majesty’s Government view with favour the establishment in Palestine of a national home for the Jewish people, and will use their best endeavours to facilitate the achievement of this object, it being clearly understood that nothing shall be done which may prejudice the civil and religious rights of existing non-Jewish communities in Palestine or the rights and political status enjoyed by Jews in any other country.”

Britain governed Palestine from Jerusalem, from 1917–48. The bitter consequences of the British Mandate are still evident today, in Jerusalem as much as anywhere. Then, Britain mattered, like it or not. Could Britain matter now, by actually advancing Palestinian rights beyond mere words? The Balfour Project charity (no apologist for the man or his promise) says yes.

Britain incorporated the Balfour Declaration into its League of Nations Mandate, which also contained “a sacred trust of civilization” for the well-being and development of the people of Palestine. This meant preparing the people of Palestine for independence; that did not happen, despite repeated complaints from the League of Nations secretariat that Britain was failing in its duty to advance Palestinian civil rights, including the right to self-determination. In 1919, well before Britain gained the Palestine Mandate from the League of Nations, Balfour wrote to George Curzon (his successor as Foreign Secretary), “The weak point of our position is of course that in the case of Palestine we deliberately and rightly decline to accept the principle of self-determination.” According to the late British historian Martin Gilbert, himself a strong supporter of the state of Israel, it was a central tenet of British Mandate policy to withhold representative institutions in Palestine until such time as there was a Jewish majority to control those institutions. That’s how it turned out, by force of arms and all that went with it. There is an enduring British responsibility; the Balfour Project charity*2 believes that to be true and seeks to persuade others of that truth. The aim is not simply to look back, but to learn the lessons of the past as we look forward.


May I commend to you an excellent 20-minute film: Britain in Palestine, 1917–48. It is available on our website and tells a sad story very well.*3 Britain made contradictory promises which were mutually incompatible; allowed the development of Jewish para-statal institutions; suppressed the Arab Revolt of 1936–39 with great brutality and – during and after World War II – tried vainly to curb Jewish immigration. Britain found itself the target of Zionist militants whom it called terrorists – Begin, Shamir, etc. The biggest blow came in Jerusalem, with the bombing of the King David Hotel by the Irgun in July 1946. The hotel was the British administrative headquarters for Mandatory Palestine. Ninety-one people were killed, and 46 injured. Among the dead were 41 Palestinians, 28 British nationals, and 17 Jews. The cumulative effect of repeated attacks was to sap the will of the British Government to stay in Palestine. So they pulled out, amid chaos and war. A.J. Sherman’s book Mandate Days: British Lives in Palestine, 1918–48 tells the story, including extracts from the diaries of Sir Henry Gurney, the senior British civil servant as Chief Secretary to Palestine from 1946–48. Of Britain’s inconsistent policy towards Palestine he wrote, in March 1948, “In fact, the last 30 years in this country have seen nothing but fluctuations of policy, hesitations, or no policy at all.”


That was then. What about now? Where once Britain exercised power, for good or ill, now it can exercise influence to advance Palestinian rights – but only if it so chooses.

The British Government recognized the state of Israel in 1950. Seventy-two years later, it has yet to recognize the state of Palestine alongside Israel, on pre-June 1967 borders. The Balfour Project advocates immediate British Government recognition of Palestine – less to prejudge the outcome on the ground, but more to demonstrate parity of esteem for the Palestinian people, and to put the principle of upholding the rule of law at the heart of British policy. By the rule of law in this context I mean International Humanitarian and Human Rights Law, in particular the Geneva Conventions and the series of UN Security Council Resolutions beginning with UNSCR 242 and culminating in UNSCR 2334. Britain wrote 242, and contributed and signed up to the rest.

The Palestinian people have the right to self-determination, including the option of statehood. British Government recognition of Palestine is far more than a symbolic act. Recognition has profound political, legal, and psychological effects. For example: the German Government sought to persuade the International Criminal Court that the ICC had no locus to investigate alleged war crimes in Palestine and Israel. The basis of Germany’s argument was that Israel is not party to the Statute of the ICC – and that Palestine is not a state, and therefore cannot bring a case before the ICC. Happily, Germany’s argument was rejected. While German Government recognition of Palestine is unlikely any time soon, each of the three main British opposition parties – Labour, Scottish Nationalists, and Liberal Democrats – publicly support immediate recognition of the State of Palestine. Taking this step would alter the dynamics of Britain’s relations with both Israel and Palestine. It is the right thing for Britain to do – and even post-Brexit, other European states would follow that lead.


In 2020 the Balfour Project held an online conference on Jerusalem.*4 On this occasion, we asked the British Government to: reaffirm publicly East Jerusalem’s status under international law as occupied Palestinian territory and oppose current systematic efforts to undermine this status; press for true freedom of access for all believers – Jewish, Muslim, and Christian – to their respective holy sites in Jerusalem, especially Jews to the Western Wall, Christians to the Holy Sepulcher, Muslims to Al-Aqsa Mosque, from wherever they live; work effectively to uphold the rule of law reflected in UN Security Council Resolutions, particularly Resolution 2334, which condemns illegal Israeli settlements in East Jerusalem and the rest of the Occupied Palestinian Territory; insist that Israel end forthwith its discriminatory practices in Jerusalem, enabling all Jerusalemites to enjoy the same rights and services, regardless of creed or nationality; and recognize the State of Palestine alongside the State of Israel, with Jerusalem as the shared capital of both states. We made a noise and raised awareness but did not affect British Government policy. So our aim must be to make a bigger noise.

Our keynote speaker is Hanan Ashrawi, who will address both Britain’s responsibility and what Britain should do today. Historian Avi Shlaim will speak on the theme “From Balfour to Bevin: Britain’s betrayal of Palestine.” Balfour Project trustee John McHugo will address the legal vacuum which Britain created – and how Britain failed its “sacred trust of civilization” towards the Palestinian people. Professor Michael Lynk, who recently concluded his assignment as the UN rapporteur on human rights in the Occupied Palestinian Territory, will describe how Israel still uses the British “Palestine Defence (Emergency) Regulations 1945” against Palestinians in the West Bank. The regulations make provision for administrative detention, the demolition of Palestinian homes, and other repressive measures still being imposed on Palestinians by the current occupying power. The legacy endures.

“A mighty crash shook the house. Something – a bomb, a mortar, a weapons store? – exploded with a deafening bang. The little girl could feel it right inside her head. She put her hands to her ears and automatically got down onto the cold tiled floor of their liwan with the rest, as they had learned to do. Shootings, the bullets whistling around the windows and ricocheting against the walls of the empty houses opposite, followed immediately. Hurry up! Hurry up! The danger in the air was palpable. The taxi stood waiting outside, its doors open, to take them away to where she did not want to go.” Ghada Karmi in In Search of Fatima. 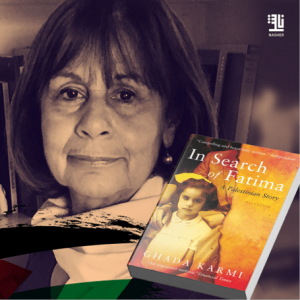 Dr. Ghada Karmi, who was eight years old when she and her family were compelled to leave Jerusalem, will give her eye-witness account. She describes her experience of the events in 1948 in her book In Search of Fatima.

The May 18 conference will offer the perspective of British Palestinians Atef Alshaer, Imad Karam, and Adam Abdalla, chaired by Leila Sansour of Open Bethlehem, talking about their experiences living in Britain today and outlining what they ask of Britain’s civil society, Parliament, and Government. Finally, four British Members of Parliament will share their thoughts on what can and should be done to advance Palestinian rights now.

The Palestinian right to self-determination is clear today. It was already clear a century ago, when the British Government deprived the Palestinian people of that right. Britain bears more than its share of responsibility – and, with that, a duty to work now to advance Palestinian rights. Attaining those vital rights is not only essential and long overdue, but also in the interest of all – Palestinians, Israelis, Britons, and the wider world. Until that is achieved, there can be no just peace. Justice and peace go together. The Balfour Project charity seeks to make that case to those prepared to listen – and to reach those who are not yet so minded.

*4 Audio and video recordings as well as transcripts of all sessions of the online conference Jerusalem: From Past Divisions to a Shared Future? The Balfour Project, September 21, 2020, are available at www.balfourproject.org/jerusalemconference.