From Life Imprisonment to Environmental Conservation 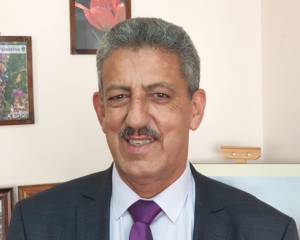 Jameel Mtour was appointed head of the Environment Quality Authority in July 2020. Born in Sair, Hebron, Palestine, on May 3, 1961, Jameel holds a degree in public health from Bethlehem University. During his university studies he was elected to the student council and also played an important role in promoting the student youth movement, contributing as well to the establishment of youth committees for social work. But in 1986, immediately after graduation, he was arrested and sentenced to life imprisonment for his participation in resisting the illegal Israeli military occupation.

Inside and outside of prison, Jameel has held many positions, including being a member of the Prisoner Central Committee, cultural director in Junaid Central Prison, coordinator of the Struggle Committee in Nafha Prison, and editor of political magazines. He authored many studies, some of which have been published, whereas others are still waiting for publication. His writings include (in Arabic) “The September Revolution,” “Behind the Bars of Oppression,” “Zionist Racism between Theory and Practice, “The Desire for Independence,” “The Uprising of Prisoners in the Occupation Prisons,” and “Rules of Behavior in Detention,” as well as many articles in a number of local newspapers and magazines.

Among the many hunger strikes in which Jameel participated to achieve his and other prisoners’ rights was the 1992 strike in which 12,000 prisoners participated. During the solidarity actions that were carried out to support the prisoners, Jameel’s brother, Anwar Matour, was killed by the Israeli occupation army. Yet, Jameel persevered in his conviction that peace based on justice is achievable, and he participated in many dialogue sessions with the various delegations, visiting the prisoners alongside his fellow leaders in prisons.

In 1999, after the agreements made between the PLO and Israel, Jameel was released from prison and joined the Environmental Quality Authority, getting involved in environmental inspections. He got married (and now has three sons and a daughter), completed a master’s degree in public health at Birzeit University in 2004, and rose within the ranks of the EQA until he was appointed vice chairman and served in that position for almost ten years before being appointed as head of the EQA.

Under Jameel’s leadership, the EQA’s capable team is embarking on important initiatives such as preparing the 6th National CBD report, a new National Biodiversity Strategy, various action plans, and much more.