People with disabilities face several challenges that can threaten their rights, even though these rights have been clearly specified in international conventions. Approximately 127,962 people in Gaza, or about 6.8 percent of the population, have disabilities, according to the last official statistics from the Palestinian Central Bureau of Statistics. The increasing number of people with disabilities in the Gaza Strip is caused by the ongoing Israeli attacks against Palestinian civilians that result in many injuries. Moreover, 94 of the participants in the March of Return activities were forced to undergo amputations of their fingers, upper limbs, or both. 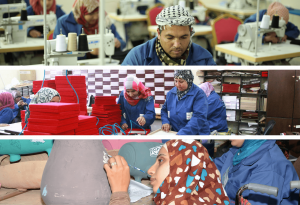 The physical and psychological damage sustained by people with disabilities in Gaza during more than four wars have robbed this valued section of the population of their dreams for decent work. While pre-injury jobs become inappropriate following their disabilities, their jobless state adds to hardship in the face of medical bills and other challenges.

“The promotion of full, productive, and freely chosen employment …. should be regarded as the means of achieving in practice the realization of the right to work.” International Labour Organization (ILO) Recommendation No. 169 concerning Employment Policy.

To fulfill this need for rehabilitation and vocational training for people with disabilities, Irada Center was established in 2012 with a clear vision of how the integration of people with disabilities can play a significant positive role in the economic, psychological, and social aspects of their lives. Between 2012 and 2022, Irada Center graduated 2,500 people with disabilities from various vocational training programs such as mobile and smart-devices maintenance, sewing and fashion design, pin string art, jewelry design and production, among others. After the training is completed, 1,500 temporary paid employment opportunities are awarded to Irada graduates, thus facilitating their integration into the labor market. Providing a source of income helps contribute to the establishment of a decent life. Thus, at least 100 small projects are funded through integration initiative. According to a study by the International Labour Organization (ILO) to evaluate Irada projects’ impact on its trainees, 53 percent of trainees are working on their own projects that are still flourishing.

As an integration center for Gazan youth and women with disabilities, Irada provides an accessible vocational training environment, including accessible transportation and labor market training programs. The center also strives to provide psychological support services. It is regarded as one of the most successful programs that can boost the  quality of vocational training outcomes. Its products match labor market needs and create sustainable job opportunities. All of this is in line with twenty-first-century skills and entrepreneurship requirements. 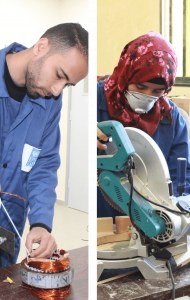 Those who have trained in Irada Center show a strong willingness to succeed and are the reason that Irada exists. One the trainees who graduated from the last sewing program is Rima. She asserts, “There is a great difference between the old me and the new me. Not only did I learn to sew, but I also increased my self-awareness, and that has made me strong enough to gain the custody of my children. Every time I look at the hope in the eyes of my kids, I am inspired to persist and continue on the way I’ve started. Sharing my own experience is an inspirational message to all women with disabilities: Dear You, wherever you are, do not be afraid to speak up and keep fighting for what you believe in, your dreams.”

Although problems are multiplying for Gazan people in general and people with disabilities in particular, Irada center is able to enhance the employability of Gazan women and youth with disabilities in many different fields. This success is undeniably the outcome of cooperative contributory partnerships with international and community institutions that strive to identify the needs of youth, women, and workers with disabilities and enable them to make a sustainable living and live a more fulfilled life.