In My Mother’s Footsteps: 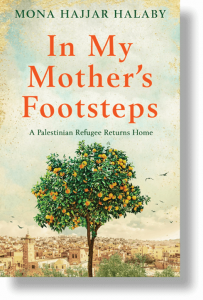 “Refugees are like seeds that scatter in the wind, and land in different soils that become their reluctant homes,” my mother once told me. As a small child, I looked up at my mother and clutched her hand. The puffiness of her palm reminded me of a loaf of warm pita bread, and when she laced her fingers into mine like a pretzel, I felt safe. I would have walked with her to the ends of the earth. (Excerpt from In My Mother’s Footsteps.)

When Mona moved from California to Ramallah to teach conflict resolution at the Ramallah Friends School for a year, she kept a journal. Within its pages, she wrote her impressions of her homeland, a place she had only experienced through her mother’s memories.

As she settled into her teaching role, getting to know her students and the challenges they faced living in a militarized, occupied town, Mona also embarked on a personal pilgrimage to find her mother’s home in Jerusalem.

Mona had dreamed of being guided by her mother down the old souks, and the leafy streets of her neighborhood, listening to the muezzin’s call for prayer and the medley of church bells. But after fifty-nine years of exile, it was Mona’s mother who held her daughter’s hand as they visited Jerusalem together, walking the narrow cobblestone alleys of the Old City. Their roles were reversed. Mona had become her Mama’s legs and her memory – and the one to tell her story going forward. 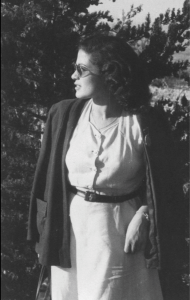 Living in Palestine for a year, Mona saw with her own eyes the consequences of the Israeli occupation on her people— the concrete wall that separates Palestinians from their land and from other Palestinians; the checkpoints that severely limit Palestinian freedom of movement; and the illegal Israeli settlements in the Occupied West Bank and East Jerusalem.

In My Mother’s Footsteps is a personal narrative, but it also touches on the universal themes of displacement and dispossession. Mona’s hope is that her book will help humanize the Palestinian struggle for justice and offer insights into life under Israeli occupation.

A life story in two voices, past and present, exile and return, In My Mother’s Footsteps is a moving and heartrending journey of a daughter discovering her roots and recovering her mother’s beloved past. It is also an intimate and tender account of daily life for Palestinians as never seen before.

For fans of The Bookseller of Kabul and The Beekeeper of Aleppo.

Mona Hajjar Halaby is a Palestinian-American educator, writer, and social history buff who resides in California, USA. She has authored No-Fault Parenting, Belonging, and In My Mother’s Footsteps: A Palestinian Refugee Returns Home. She has created a Facebook page that focuses on photographs of Jerusalem during the first half of the twentieth century, entitled British Mandate Jerusalemites Photo Library, and has also collaborated on the interactive documentary
www.jerusalemwearehere.com.