Hosh Traitreh (Traitreh Courtyard) is located in the middle of Al-Aqqabeh Quarter, to the west of the Ibrahimi Mosque, in the heart of the old city of Hebron (31° 31’ 31” N, 35° 6’ 29” E). It tells tales of glory, pride, and nobility through its paths and alleys that were built by its residents who came from the families of Abu Mezar, Dweik, Mujahid, Iskafi, Sub Laban, and Hab Rumman. Today, it is still one of the heritage landmarks of Hebron’s old city, as described by journalist Jihad Kawasmeh.* 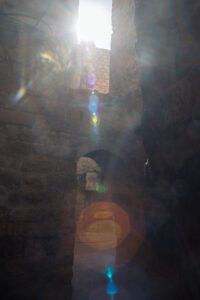 Hosh Traitreh is among the compound courtyards that are composed of a vast number of spaces that form 26 apartments in their entirety. This courtyard is characterized by the distribution of rooms around a central axis that is interspersed with several small squares, irregular in their geometric formation, which give the yards a distinctive, organic character. 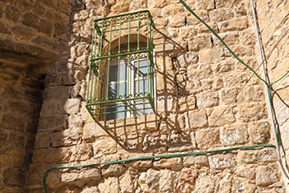 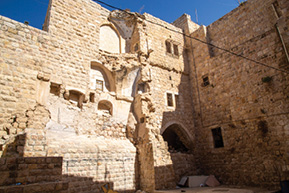 Like the rest of the courtyards of Hebron’s old city, it was influenced by social and economic factors, as its design was appropriate for human needs, customs, and traditions, and by the nature of the extended-family structure. This is reflected in a unique architectural pattern. As a result of the restoration efforts made by the Hebron Rehabilitation Committee, Al-Hosh currently houses 25 families or approximately 125 individuals, while the courtyard preserves its traditional style and distinctive heritage elements and details.

According to Kawasmeh, historian Yusef Abu Mezer explains that Hosh Traitreh, considered the largest in the old city of Hebron, was named after its residents from the Abu Mezar family. Its members were distinguished by wearing the taratir or tantur (a woman’s cone-shaped headdress, popular in the Levant during the nineteenth century). With time, its name became traitreh. He indicates that the construction of the Hosh dates back to the Crusader era, when the quarter was called Fustoqa. Afterwards it was called the Aqaba Quarter, and finally Al-Aqqabeh Quarter.

Abu Mezar recounts that Hosh Traitreh was sometimes called the tanning Hosh because its owners, especially the Abu Mezar family, were famous leather tanners. It was closed in 1938 when the British Mandate authorities extended the waterline. This measure led to the end of the camel pack manufacturing industry, as the containers that the Hebronites had used to preserve their water were no longer in demand.

Hebron, also called Al-Khalil or Mamre in ancient times, is situated at an altitude of 900 meters and has been settled continuously for 5,000 years. It is regarded as holy by Muslims, Christians, and Jews alike because the prophet Abraham is believed to be buried there.