There is a country named Palestine, and it has been referred to as Palestine for many centuries. The Romans already used a version of that name, as did the Byzantines, who replaced them, and the Islamic empire that by the seventh century took over Palestine and used the term “Jund Filastin” to name the district that today is Palestine. From the sixteenth century onward, people in the West and in the Arab and Muslim worlds related to the land as Palestine. Thus, there is a centuries-long history of a geographical place called Palestine, where different political formations appeared over the years. The people living there, be they Christians, Jews, or Muslims, were Palestinians (people of Jewish faith constituted for most of the time around 1 percent of the population and later grew to about 10 percent; but when Zionism appeared, most of them did not adhere to that ideology).

In the modern age of nationalism, which arrived in the Middle East in the early nineteenth century, the new national movement initially wished to create a pan-Arab state in the Eastern Mediterranean and later a pan-Syrian state. But either way, both national movements recognized Palestine as part of these projects.

During the last years of the Ottoman Empire, Istanbul attempted to reorganize its districts in a way that corresponded better to specific ethnic, religious, cultural, and sectarian identities. Although late-Ottoman Palestine was made up of three such districts, the main one, the Jerusalem district, included most of Palestine in recognition of the unique Palestinian identity. Not surprisingly, the newspaper Falastin appeared in Jaffa in 1911.

Throughout the nineteenth century, the people of Palestine had their own dialect, the particular coexistence fabric of a society that was made up of more than one religion, and an intricate relationship between landowners and tenants that was far more just than the European feudal system. Palestine also enjoyed a thriving urban life, led by an educated modern elite, which became more national as the years went by. The saying in the eastern Mediterranean was that books were written in Cairo, printed in Beirut, but read in Jaffa. The country’s scholarship, erudition, and educational system were highly developed, although it needed more time to become a modern-day system in terms of women’s education and literacy.

Even when the colonial powers divided the eastern Arab world into nation-states as part of their aim to divide and rule, after the First World War, they recognized Palestine in these arrangements as a well-defined geopolitical space. In the famous act that constitutes one of the greatest historical injustices, Britain – granted the responsible role of a Mandatory power over Palestine, namely helping it reach self-determination, independence, and modernization, as it did in Iraq and Egypt – betrayed that pledge by inserting into the Mandate charter the infamous Balfour Declaration. When the declaration was made in November 1917, it was not a very important document. It was a letter sent by the British foreign secretary to the informal head of the Anglo-Jewish Community, Lord Rothschild, promising the building of a homeland for Jews in Palestine (at the time, the Anglo Jews supported it as a solution for the Jews of Eastern Europe, not for all the Jews in the world; their leadership did not dream of leaving Britain for Palestine, giving up their British citizenship, or denying their English nationality). It became an important document when it was incorporated into the Mandatory charter in 1922 and guided British policy on the ground. 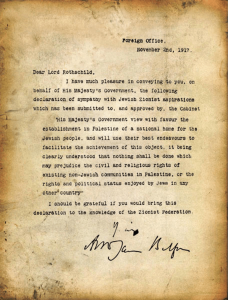 While Britain during its time of rule (1918 to 1948) did not allow the Palestinians to build the Palestine they deserved (they insisted that there were no Palestinians, only Muslims and Christians), it helped the Zionist movement build a state within a state (for instance, unlike the Palestinians, the Zionists were allowed to open a university, have a nationalist education system, build an army, and take over the economy and the labor market). The Mandate authorities also turned a blind eye to the early projects of ethnic cleansing of Palestinian villagers that began in the mid-1920s.

And yet, the Palestinians did not surrender during the Mandatory period but fought for a Palestine for the Palestinians, as did the Syrians, the Iraqis, and the Egyptians. The big moment was the very first Intifada in the modern history of Palestine that erupted in 1936. Britain used brutal force, air force, and a large number of troops (assisted by Zionist paramilitary groups) to suppress the revolt, and it took them three years to do so. In the end, they killed, wounded, exiled, and arrested the Palestinian elite that could have helped the Palestinians in 1948, when the Zionists began the operation of ethnic cleansing, which we all refer to as the Nakba.

In the face of international diplomatic and military aid to the Zionist movement during the Mandatory years and during the Nakba, the Palestinians could not do much to save themselves and their homeland. The Arab world, under the pressure of its public opinion, intervened eventually, but with too little and too late. The Zionist movement took over 78 percent of Palestine and expelled half of its population by force. In the process, it destroyed half of Palestine’s villages, demolished most of its urban space, and killed thousands of Palestinians in more than 30 massacres that accompanied the ethnic cleansing operation: a crime against humanity.

The world was indifferent. Europe considered the developments a distraction from what many of its governments and states had done to the Jews during the Second World War; the United States was looking for allies in the emerging Cold War; the Soviet Union assisted the Zionists, thinking they could recruit them to support their side; and the United Nations legitimized the idea of the Jewish state, while all it could offer the Palestinians was to be content with half of their homeland – which the Palestinians had rightly rejected before the Nakba. After the Nakba, the world tried to persuade the Palestinians to give up all together any hope for self-determination and independence in Palestine. 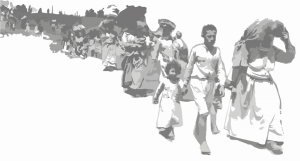 Fortunately, the Global South later changed its view on Palestine, as did the Left in the West, and other sections of civil society followed suit. The renewed Palestine liberation struggle, reignited in the mid-1960s, was seen by many as a legitimate anti-colonial struggle. It wished to liberate historical Palestine, not a small part of Palestine, and all Palestinians, not only a small part of the Palestinians (hence the refugees’ right of return was an important part of its agenda; a right that had been recognized by the United Nations in 1948 already).

Israel and the West were able to frame this just, anti-colonial struggle as pure terrorism. And under this umbrella, in 1982, the liberation movement suffered its biggest defeat since the Nakba with the Israeli invasion of Lebanon and the removal of the PLO to Tunis.

But the Palestinians did not give in. And even after another small but quite disastrous setback, the 1993 Oslo Accords, most Palestinians still frame Palestine as historical Palestine (namely, not only the West Bank and the Gaza Strip). The PLO agreed in 1993 to concede 78 percent of Palestine in the hope that at least the remaining 22 percent would become a proper sovereign Palestinian state – a vision Israel would not have agreed to back then, nor is it likely to concede at any time in the future. The result is visible so far. The Palestinian Authority rules less than 20 percent of the West Bank, and dissent with Hamas in the Gaza Strip has led to the creation of another enclave there (the Strip constitutes 2 percent of historical Palestine).

This is a good moment to remember that until 1948 there was no West Bank and no Gaza Strip. It was all Palestine, and despite everything that has happened since then, for most Palestinians, Haifa, Jaffa, and the Naqab (Negev) are still part of Palestine. If you ask internal refugees inside Israel or refugee camp dwellers wherever they are located, they will tell you from where in Palestine they, their parents, or now already their grandparents came from.

Historical Palestine still exists even in the textbooks of the Palestinian Authority and in the new emerging and exciting academic discipline Palestine Studies that now boasts ten centers around the world in the most respected universities. It has appeared in films, plays, and songs and rests forever in the memory and imagination of Palestinians and of anyone who genuinely supports them. Shirt no. 11 of Santiago de Chile’s Club Palestino will always show two outlines of historical Palestine, each representing the digit 1. And this emblem exists as a pendant on the neck of many Palestinian women and men and on photos, tapestries, and embroidery displayed in their homes. Palestine is mentioned in three national anthems: Mawtini, Fidai, and Biladi.