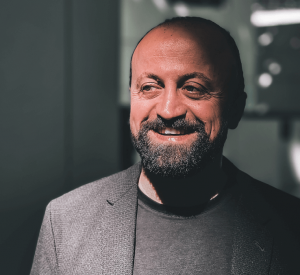 George Al-Ama is a distinguished researcher, academic, and collector, who in his young and burgeoning career has significantly contributed to Palestinian art and cultural heritage. Few can keep up with George: he is constantly active in different positions, working simultaneously on exciting projects – whether preparing for an exhibition, a conference, an auction, or going on a field trip to a cemetery or an abandoned house to gather a missing piece for his research.

Growing up in Bethlehem, George was surrounded by the finest of Palestinian handicrafts as he would regularly accompany his father to the family’s souvenir shop. After completing his Bachelor of Arts in English Literature and Commerce at Bethlehem University, he joined the family souvenir business. During this time, he witnessed how Russians came to Palestine in search of Russian icons to purchase and take back to their homeland. This experience greatly influenced George and triggered him to search for and safeguard his own heritage.

The journey began by researching his family’s history and learning that, at the end of the nineteenth century, the Al-Ama family was deeply rooted in Chile, working in the mother-of-pearl trade. This inspired George to continue his research in material culture in Palestine. He took on several projects as a researcher, including with the Centre for Cultural Heritage Preservation (CCHP) where he documented residential mansions in Bethlehem from the nineteenth and early twentieth centuries. In parallel, he pursued a Master’s degree at Al-Quds University, which allowed him to delve deeper into the history of the mother-of-pearl craft in Bethlehem. During this time, he was also a member of the national team that spearheaded the campaign which led to Star Street and the Church of the Nativity being inscribed by UNESCO as a World Heritage Site in 2012.

Over the last two decades, driven by his passion and determination to preserve Palestinian cultural heritage, George has gathered an extensive collection of artifacts from Palestine, including photographs, maps, costumes, handicrafts, and icons, as well as modern and contemporary art. Over the years, he has ensured his collection is accessible, through regular partnerships with local and international museums, organizations, and scholars, that showcase and study it. In Palestine, his collection has been exhibited at the Palestinian Museum, the Birzeit University Museum, the A.M. Qattan Foundation, the Al-Ma’mal Foundation for Contemporary Art, the Palestinian Art Court Al-Hoash, and many other spaces. Internationally, the collection was exhibited at the Arab World Institute in Paris and the Museum of the Bible in Washington, DC.


George has worked as a consultant and professional advisor to several institutions and private foundations, building art collections, presenting cultural programs, and developing partnerships. Most notably, in 2012, he became an advisor to the Bank of Palestine and initiated their art collection. His position with the bank expanded over time: he currently works in the development of relationships with churches and diaspora communities. In 2017, he also joined the Custody of the Holy Land in Jerusalem and recently became a member of the scientific committee of the Terra Sancta Museum, guiding and advising the Custody on the establishment of the museum and its Palestinian collection.

George’s latest project is the Dar Al-Sabagh Diaspora Studies and Research Centre,which was established in 2018, along with Kassis – Sabagh family, and the CCHP. The center seeks to develop bridges of cooperation with the diaspora, and has become a reference point for anyone who wants to return and explore Palestine, to learn about their ancestral roots and cultural heritage. He also lectures at Dar Al-Kalima and Birzeit universities on art-related topics.

Outside of his professional life, George is committed to voluntary community work, currently serving on several boards, including the Bethlehem Development Foundation, the Power Group, and the John Paul II Foundation. Despite his busy schedule and responsibilities, he always finds time to be there for his family, friends, and loved ones. He is loyal, kind, and generous, and always has his door open, welcoming everyone who comes his way.