From Jerusalem to a Kingdom by the Sea

The story of a family and its black swans

By Adel A. Dajani 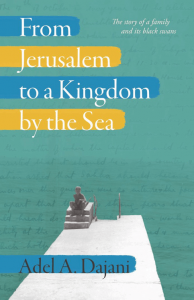 While many new Palestinian memoirs have appeared in recent decades, rarely does one come across a deep, personal account written with plain honesty and integrity. Adel Dajani’s family account is an emotional rollercoaster, where success is scarred with failure, happiness is bittersweet, and prosperity is derailed by war. Tales take place against the backdrop of Palestinian fragmentation and the collapse and resurrection of Arab countries.

The Dajani family is among the most prestigious in Palestine, known for their honorable role as custodians of many of Jerusalem’s holy sites. But the clan is also renowned for its highly educated members: throughout the family’s history – dating back to the year 637 – they have served as doctors, judges, scholars, imams, teachers, and in other leading community positions. Economically, they are recognized for their ample land ownership as well as their heavy involvement in trade and commerce throughout the last centuries.

From Jerusalem to a Kingdom by the Sea is a unique account of the uprooting of an upper-middle-class family from one of the most beautiful cities of Palestine, Yafa (Jaffa). The memoir begins by detailing the family’s social and economic wealth before the 1948 Nakba, followed by the family’s tragic displacement as its members become refugees in the diaspora. Dr. Fouad, an iconic but short-lived figure, left a legacy that is still witnessed in modern-day Jaffa. Aziz is an indulging father yet a firm judge; Faika, a lovely lady with a distinguished style. The rich descriptions of the family will leave you both intrigued and anguished.

Education is a dominant theme in this story. The Dajani siblings were sent to Alexandria, London, Oxford, Cambridge, and Eton to pursue an education. Education was often a means to protect and advance the family’s social class and their cross-border influence. 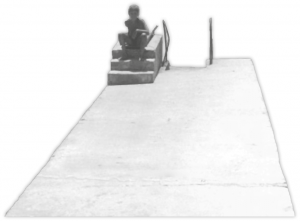 As they eventually relocated to Libya, the Dajanis began to rebuild their lives, success, and status. Indeed, with strong ties to Idris, the king of Libya, the family continued to play an important role in society and helped shape the political reality of the North African country. Awni served as a member of the Libyan supreme court, after being among the few to formulate the 1951 constitution of the newly independent state of Libya. This exemplifies the important role that Palestinians played in the Arab world in general after the Nakba.

The family continued to enjoy their new home in Libya. However, years later, this chapter came to a devastating end as Libya entered a period of turmoil, with the violent overthrow of the monarchy. Awni, the trained Oxbridge judge, would change his career in the newly developed oil industry, and Salma, the mother, became a magnet for social life in Tripoli. The son, Adel, a charismatic, ambitious young boy, moved to the United Kingdom to study at the prestigious Eton College. The Dajanis’ life in Tripoli and their close relationship to the monarchy provides valuable insights on Libya’s political life during those pivotal years.

As the family found a new home in Tunisia, Adel began to build his career in banking. Traveling between London, Hong Kong, and Tunisia, he built a successful business career with strong affiliation and commitment to his home, this time in Tunisia. But as he recounts, the black swans continued to follow them. The dire socioeconomic situation in Tunisia resulted in a popular uprising, ultimately instigating the Arab Spring. The book visits some important key events and offers an honest and critical but valuable reflection on these “revolutions,” both in Libya and Tunisia.

The book is a beautifully written intergenerational narrative. It is as much about Palestine as it is about Libya and Tunisia. It is also as much about displacement as it is about building a safe home. Once they were made refugees from their first home, Palestine, the Dajani family moved from one displacement to another, but with dignity and resilience they persevered.