Since 1948 no Israeli government has been willing to recognize the Nakba. This refusal of the well-documented ethnic cleansing process may be due to those who believe they did nothing wrong or perhaps because releasing the Nakba-related documents from the archives would dismantle the myth of Palestine as a “land without a people for a people without a land.” But in reality, no sustainable peace can ever exist without addressing the Nakba. And the western Jerusalem neighborhoods and villages are no exception. 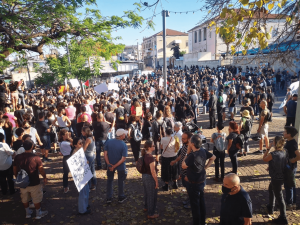 There are several intricate levels involved in analyzing Jerusalem. While some opt to constantly emphasize the religious significance of the city, when it comes to the Nakba and the fate of the Palestinian people, Jerusalem is treated just like the rest of Palestine. And if the process that has been taking place in East Jerusalem since the 1967 occupation is similar to that of Jaffa since 1948, then it can be said that the western neighborhoods and villages of Jerusalem underwent a much more dramatic process: With the exception of the village of Abu Ghosh and a handful of families in Qatamon and Baq’a, no Palestinians survived the Nakba in their homes.

The fate of the western Jerusalem neighborhoods and villages is considered a “fact on the ground.” Despite the fact that important international parties strongly lobbied to secure a “corpus separatum” in Jerusalem for the UN partition resolution, neither this nor the safety of the civilian population was honored. The same countries that enthusiastically cheered for the partition of Palestine did little to prevent or repair the catastrophe that took place. The same has been true since 1948: from Jerusalem to elsewhere in historical Palestine.

In Jaffa dozens of Palestinian families are being threatened with eviction as the state takes illegal action to sell Palestinian refugee property to a private company; similar deals have been made in Haifa, Acre, and other cities, while almost 40 Bedouin villages in the Naqab area remain unrecognized, meaning that almost 100,000 people have no access to essential services such as water, electricity, or other basic infrastructure.

The State of Israel allows Jews to make claims over pre-1948 property, but this does not apply to Palestinians, including its own Palestinian citizens. This is how the state has denied justice while backing the work of extremist Zionist organizations that, with foreign funding, advanced agendas to maximize exclusive Jewish control over the land on both sides of the Green Line.

Based on our experience, most of these claims are unfounded. But based on the information available from the UN refugee property database created by the Palestine Conciliation Commission (PCC – composed of the United States, France, and Turkey) back in the 1950s, millions of dunums of privately owned Palestinian property has been stolen by Israel since 1948. This information is readily available and includes West Jerusalem. If Israel claims that all of Jerusalem is a “united capital” where all residents enjoy the same rights, why is it that Palestinians with Jerusalem IDs are prevented from reclaiming their property in Talbiyeh, Qatamon, Ein Karem, or Lifta? The answer is simply because the notion of “same rights” is a myth.

Think about this: My family-owned orange groves in Jaffa were confiscated under the “Absentee Property Law,” and even though I am a member of the Israeli parliament, I cannot reclaim this land. Why? Because I’m Palestinian. Not only that: There are over 300,000 Palestinian citizens of Israel who were internally displaced in 1948, such as the villagers of Al-Aghabasiyya, Saffuriya, Iqrit, and Kufr Bir’im. To this day, the state denies their return, restitution, and compensation, and part of their land has been given to Jewish citizens for use. This is not justice; this is maximizing Jewish control over the land.

The State of Israel has a responsibility to recognize the Nakba and open the files so that everyone, regardless of religion, can reclaim what is rightfully theirs.

The late US President John F. Kennedy once said: “We cannot negotiate with those who say what’s mine is mine and what’s yours is negotiable.” This is precisely Israel’s attitude, “What is mine (pre-1967 Israel) is ‘mine,’ and what is yours (the occupied Palestinian territory, including East Jerusalem) is ‘negotiable.’ As reflected in the Trump administration’s initiative, the discussion has been shifted towards a “division of the West Bank” between Palestinians and settlers under a “Greater Israel.” According to this initiative, Jerusalem – whether East or West – is off-limits for Palestine. But was the Trump initiative just about borders? No, it was about sending a clear-cut message to the Palestinian people: You have been defeated. You have no rights. 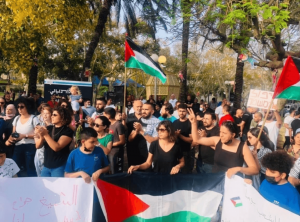 Any serious attempt to bring about peace should begin by totally dismissing the racist, ignorant, and populist principles of the Trump administration and accepting a few facts, including that Jerusalem is not exclusive Israeli property. International law and Palestinian rights must be fully integrated into the formula, for those who will become citizens of the State of Palestine as well as those who are Israeli citizens. This certainly includes the fact that East Jerusalem should be the sovereign capital of Palestine, which can take place in the context of an open and shared city.

The western neighborhoods and villages of Jerusalem are part and parcel of the history of our Palestinian people and its cultural heritage. As witnessed by events last May, Jerusalem unites all Palestinians, and no annexation, wall, or colonial-settlement will change this reality. Achieving a lasting peace agreement between Israel and Palestine should also mean protecting Palestinian cultural heritage in places such as Lifta, Ein Karem, or the Mamilla Cemetery, while ensuring the fulfilment of Palestinian refugee rights, including rights over property.

It is in the interest of peace that Israel should look at the facts and agree that it cannot continue to avoid addressing the Nakba. Israel’s Nakba denial has led many Jewish citizens to ignore what has been done. As Moshe Dayan said to Israelis in 1969, “You do not even know the names of these Arab villages, and I do not blame you because geography books no longer exist.” On the other hand, we find the poet Mahmoud Darwish, a son of the Galilee, who wrote simple words full of meaning: “I am from there, and I have memories.” Whoever walks in the neighborhoods of Jerusalem’s Talbiyeh, Haifa’s Wadi Saleeb, or Jaffa’s Ajami will realize that those houses and spaces are part of the memories that represent a collective experience stronger than Israel’s Nakba denial.