The Nakba of Qatamon began with the bombing of the Hotel Semiramis on Monday, January 5, 1948, by the Haganah, the Jewish militia that grew up to be the Israeli army. About 26 people were killed.

Two doors up, on the next corner, was my grandfather’s house. Manolis Kassotis was brought to Jerusalem as a child from the Greek island of Samos by his uncle, the Greek Orthodox Patriarch Damianos I. In 1922 Manolis married Vitsa Schtakleff, a Jerusalem-born half-Greek half-Bulgarian girl of 17, and took her to live with him at Breij, a large estate he leased from the Patriarchate, some 30 kilometers west of Jerusalem. As the children arrived, beginning with my aunt Vasso in 1924, they needed a foothold closer to civilization, so Manolis purchased the house in Qatamon, initially renting it out. Two blocks away from the church and monastery of Saint Simeon, in what was known as Upper Qatamon, the house was already on the map by 1929, one of only a few dozen, well before Qatamon became a bustling neighborhood outside the walls of Jerusalem.


One of my mother’s earliest memories was of her three-year-old self holding her father’s hand as they stood outside the house, looking at what was about to become their new home in 1933. Her younger sister, Mary, was born in the house in 1936.

The bombing of the Hotel Semiramis on January 5, 1948 marked the beginning of the Nakba of Qatamon. In the next few days, the Kassotis family, who lived two doors up the street, made tea for the British soldiers who excavated the rubble looking for survivors, and watched as their neighbors packed up and fled in search of safety. Soon they’d be joining the exodus too. But at first they wouldn’t go very far… 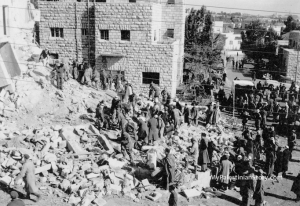 The family was happy there. Manolis would go back and forth between Breij and Qatamon. The girls went to school: Vasso at Schmidt’s Girls’ College; Anna (my mother) first at the Greek school in the Old City and then, upon graduation, at the Jerusalem Girls’ College (JGC) in Rehavia for the benefit of an English education; and Mary at the primary school located at the Greek Club in the Greek Colony.

The club was the hub of the community’s activities and celebrations – where my grandmother played the piano and my mother recited poems and joined her Girl Guides’ troop. But it was not the only venue for the Kassotis’s outings. The YMCA, their uncle Nando Schtakleff’s Regent Cinema in the German Colony, the Jewish cafés in Ben Yehuda, the picnic grounds around St. Simeon, friends’ and relatives’ homes – all are remembered very fondly.

But in late 1947, the family’s easy, joyful life began to be overshadowed by the fighting that broke out following the November UN vote to partition Palestine. Explosions, snipers, barbed wire became daily occurrences. When access to JGC became dangerous, my mother, along with friends, moved to Al-Ummah School in Baq’a, run by Shukri Harami, for a few months until graduation.

The Semiramis explosion in early January and the ripples that followed in its wake left no one untouched. Within days, Qatamonians started fleeing in droves in search of safety. The Kassotis family, finding themselves isolated and with their house damaged by the explosion, moved in with the Gaitanopoulos. Vitsa’s sister, Marika, and her husband, Efthymios Gaitanopoulos, with their two daughters, Feely (b. 1933) and Jenny (b. 1938), lived within the security zone in Lower Qatamon. The cousins were close friends and thrilled to be staying together.


But these were not fun times. There were curfews and blackouts. Sandbags were installed in the windows and provisions started arriving at the house in bulk: sacs of flour, rice, sugar. The families stockpiled food and braced themselves for the worst. The adults got busy: polishing the silverware, collecting the paintings off the walls, for safekeeping. What if during the bombing the picture of Pygmalion were to fall and break the candlesticks? How insignificant the integrity of the candlesticks would soon become…


To the younger girls, Mary (12) and Jenny (10), the parents presented the situation as a game or fairy tale. As bullets would often rain down around them, the parents cautioned them to be very careful. So when the little ones ventured out to play or shop, they’d carry their umbrellas for protection!

Soon the Gaitanopoulos left for Egypt, where Efthymios, who worked for Gresham Insurance, was ostensibly attending a conference. Only when they arrived in Cairo were the girls told that the family would not be returning to Jerusalem.

At some point, two of the Schtakleff brothers, Nando and Coca, who lived close by in the Greek Colony, also decided to flee with their families. They joined a large convoy of Palestinians headed for Egypt where, upon arrival at the border, they were refused entry. Instead they were kept in a detention center in El-Qantara, a town in the middle of the desert, on the Suez canal, which had been an old British army camp.

In her memoir Jerusalem and I, Hala Sakakini narrates how they left Qatamon on April 30, 1948, thinking that they were probably the last ones to do so. Unbeknownst to the Sakakinis, and barely a couple of blocks away, a Greek family – the Kassotis (my mother’s family) – were huddling in their cousins’ house preparing for their departure on the following day: May 1, 1948. Like the Sakakinis, and the rest of the residents of what became “West Jerusalem,” they were never allowed to return.

And so the Kassotis were left on their own in an ever-emptier Qatamon. Aunt Mary remembers how every morning her father would take her by the hand to walk around the neighborhood and take inventory of houses that had been demolished or damaged by bombs overnight.

It didn’t take long for the family to realize that they couldn’t hold out forever. But Manolis had a hard time dealing with the situation, so the eldest daughter, Vasso, who by that time worked at NAAFI (Navy, Army, and Air Force Institutes), took charge with my mother’s help. Having considered various options, they settled on Cyprus. In the north of the island was the Monastery of Saint Chrysostomos, affiliated with the Patriarchate. The abbot, who had baptized my mother in the Jordan River, was on good terms with the British colonial administration and was thus able to secure visas for them.


The tickets they bought for a flight out of Lydda became obsolete when the airport closed. Vasso and Anna went on a frenzy of visa-gathering for what would now have to be an overland trip through Jordan, Syria, and Lebanon. On May 1, 1948, as the battle of Qatamon was raging, and with whatever clothes they thought they’d need for the summer bundled in sheets, the Kassotis left Qatamon in a friendly taxi. They were amongst the last to leave – possibly the very last. After a long drive through Jordan and Syria, they arrived in Beirut late in the evening. The only accommodation available was a single room in a hotel full of Palestinian refugees. The parents slept on the bed, the girls on the floor. The following morning, Manolis went shopping for suitcases. In the afternoon, they boarded the flight to Cyprus.


My grandfather never recovered from the shock, developed diabetes, and was gravely ill for quite a while. My mother and Aunt Vasso became the breadwinners for the family. The Gaitanopoulos soon joined them in Cyprus, and the two families shared a house again for a while – mostly to help out the impoverished Kassotis. Like the rest of the residents of what became “West” Jerusalem, they were never allowed to return. Although they eventually landed on their feet in their new home country, they always held tight to what little they still had from Jerusalem: some photographs, the title deed to their house – and their memories.