I was born in Jerusalem in 1934, the eldest of the five children of Abdullah and Ellen Muna. We lived in Qatamon, and I attended the school run by the Sisters of Saint Joseph of the Apparition, located north of the Old City. It was a French school with Christian, Muslim, and Jewish students. We were taught the Arabic, French, and English languages, among other things.

My great-uncle Basil Mahshi, a brother of my maternal grandfather, Costandi, emigrated to France to escape conscription into the Ottoman army. He stayed there for nearly four decades and married a French lady by the name of Alice Quenin. With the outbreak of the Second World War, Uncle Basil and Tante Alice left France and came to live in Jerusalem.


My maternal grandmother, Maria, was happy that I was learning French. Every time Tante Alice went to visit her, my grandmother would invite me over, too, if I happened to have the day off from school. Tante Alice did not speak Arabic, she only knew French, which my grandmother didn’t speak. So she needed someone to translate. I was happy to provide my services and very much enjoyed these visits – not the least because my grandmother baked the most delicious cakes! 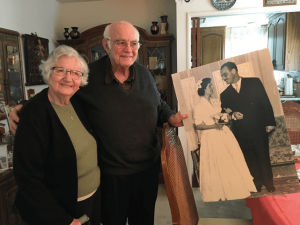 Swimming at the YMCA

As children growing up in Jerusalem, we spent a lot of time at the YMCA: swimming, learning handicrafts, playing basketball or chess, or simply meeting friends. That is where I learned how to swim. My teacher was Jack Mnatzaganian, who was in charge of the pool and taught swimming.

His teaching method was as follows: You would start at the shallow end of the pool. You’d hold on to the wall, flat on the water with your face down, and you’d start moving your legs, kicking as if you were swimming. When he felt that you had mastered that, he would send you to the diving board, at the deep end, and you jumped. I was about 10 or 12 years old when I went for my first swimming lesson – and I was terrified. Ten minutes or so at the shallow end didn’t seem like sufficient preparation. Regardless, the teacher sent me to the diving board and urged me to take the plunge: “Jump, jump, jump!” So I jumped. I went all the way down to the bottom, swallowed a gallon or two of chlorinated water, and finally floated up and tried desperately to get to the wall. Mnatzaganian bent over and grabbed me. He sat me down and let me rest for a few minutes. He then picked me up by my feet, held me upside down, and drained the water out of me. Afterwards, he said, “Go back to the diving board and jump.” I learned how to swim very quickly. I didn’t want to drink any more water.

An interesting note: men and women swam at different times at the YMCA. When it was only males, swimming trunks were not allowed. If you wore them, you were not allowed in. So we swam in our birthday suits! Of course, during swim races which were open to the public we were suitably clad.

Laila and Issa Mashy were both born in Jerusalem and are second cousins. They married in Beirut in 1955 and emigrated to the United States in 1956 (changing their name from Mahshi to Mashy) and had two children. Laila worked in sales and Issa in real estate. They are now retired and live in California.