I used to wander all the time in northern Palestine, where I live, in search of what my eyes had not seen in our stolen country, that which might be hidden. On a summer night in 2018, while I was standing next to a bus station in a Jewish town in Marj Ibn Amer, I heard a man talking on his mobile phone. But I had no idea what language he was speaking. The predominant language here is Hebrew. When the man finished his call, I asked him about the language. It turned out that he was from the Circassian minority that lives in a village near Tiberias.

I have never spent much time reflecting on the significance of the mosaic nature of Palestinian history, whether in the ancient past when religions and civilizations emerged in this country or in modern times. But I have always taken pride in Palestine and compared it to the great empires. I am convinced that the small geographic area of Palestine constitutes the most beautiful mosaic, and that the preservation of our homeland’s true face as it was before the 1948 Nakba is part of the precious beauty of the world. 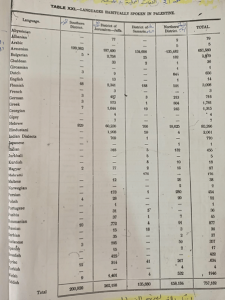 Above and below the earth lies the window of opportunity for Palestine to claim its prominence: from the shores of the Mediterranean Sea in the west to the Jordan River in the east, from Ras al-Naqoura in the north to Rafah in the south, Palestine boasts splendid diversity. Over thousands of years, many different religions and languages have emerged in Palestine, proclaiming to humanity a uniqueness and sanctity that is unparalleled within such a limited geographical area!

But the current article is not intended to lament the past but rather to examine the uniqueness of the homeland in the form of numbers.

Extensive diversity was evident in the number of languages ​​spoken in Palestine at the time of the first comprehensive census carried out in 1922 by the British Mandate authorities in Palestine. At that time, there were not only the three languages of Arabic, Hebrew, and English, but rather a total of forty languages were counted. The results of the census appeared in the official archives of the Mandate government of Palestine. One of the last pages that list the results of the census shows the diversity that the country experienced during an era when the fear of losing it was increasing day by day. 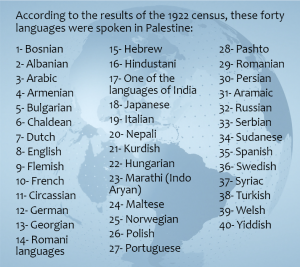 Speakers of the above languages ​​were found in Palestine for a variety of reasons that included military, religious, and touristic reasons, as well as other factors that are not understood even today. One hundred years after the issuance of these statistics, I understand better the distinctiveness of Palestine, even if we look at it from the perspective of mere numbers.

The Palestine Census of 1922 was the first systematic census of the components of life in Palestine, despite the Ottoman population census that was carried out in an earlier era. On October 23, 1922, the population of Palestine was estimated at 757,182, which included Mandatory soldiers and foreigners. They were divided according to religion, bringing the number of Muslims to 590,390, Jews to 38,694, Christians to 73,024, Druze to 7,028, Sikhs to 408, Baha’is to 265, followers of Shi’a Islam in Lebanon to 156, and Samaritans who spoke an ancient Hebrew language to 163. What struck me was that the Samaritan language did not appear in the census results. 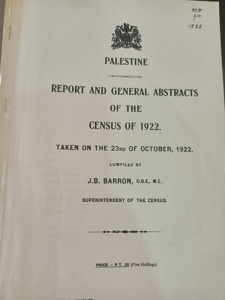 However, there were also a number of villages in the north that were not counted because they were under French control, despite the fact that they were located in Palestine according to the Paulet-Newcombe Agreement of 1920.

Some of the results of the 1922 census of Palestine were attention-grabbing and led me to raise a number of questions about that era, such as: With whom did the only speaker of the Chaldean language speak? Was it his mother tongue or a language he learned for other reasons? What would a Japanese person be doing in Palestine, since the results of the census showed that there was only one person who spoke that language? And where is the Romani language still spoken in Palestine?