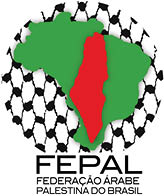 A donor country is a country that provides aid to other countries. This can occur either directly or indirectly. Palestine was a donor country when it directly provided countries in the Middle East and beyond with qualified human resources and capital after the 1948 catastrophe. But its impact is also being felt indirectly whenever a significant Palestinian presence helps create material capital and provides financial and human capital that supports social and economic development in their host countries.

In the aftermath of the 1948 Nakba, over 700,000 Palestinians were forced out of their homes and became refugees. In this horrible situation, Palestinians opted for the wisest alternative and invested in their intelligence as a way to survive and tell the world that Palestine is still alive, vibrantly, inside every single person who carries Palestinian blood, no matter whether this person is a first-, second-, third-, or fourth-generation Palestinian. Yes, Palestinians do have a tragic history. But the truth is that they have survived, and their human triumph over their tragedy is testimony to their resilience and dynamism. Palestine is not only about war, disaster, and loss; it is also about surpassing and overcoming adversities and excelling in empowering the new generations by educating them. 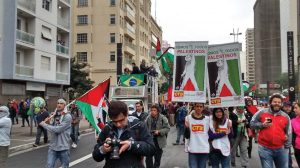 There is a general but perhaps insufficient recognition of the fact that Palestinians invest heavily in their own and their children’s education, knowing full well that this capital cannot be stolen or denied, and its returns are handsome and fruitful. Behind every immigrant and every different accent, there is a sign of courage, the testimony of someone brave enough to leave behind all he or she ever knew to follow the call of the unknown. Most of these people migrated to a country where they were not able to understand, speak, or read the language or comprehend the local culture. Still, it was a sacrifice worth making to provide a better future for their families. Palestinians were forced out of their homes and had to work twice as hard as others to build new lives.

Nowadays, having endured suffering and engaged in hard work, Palestinians are able not only to make a positive impact on their host countries but also to create jobs and help others. They know all too well what misery means and what it takes to survive and succeed.

Palestinians are not only citizens in other countries but also entrepreneurs, doctors, engineers, professors, and more. Palestine is a donor country because its nationals are accumulating material aspects and human resources. Palestine donates daily the labor of its own people to help improve other countries in every possible way. So yes, Palestine has given the fruits of its peoples’ labor and creativity to the world. Moreover, in all modesty, Palestine has contributed far more to others than what the world has invested in Palestinians. This is not to deny the generous help from the United Nations and donor countries; it merely aims to state that Palestinians have contributed their fair share and more in a give-and-take situation.

In Pelotas, Brazil, the town of around 300,000 inhabitants where I was born, the leadership of the commercial activities is concentrated in the hands of three families that came from Jelejlia in Palestine and moved to Brazil in the early 1970s. They were teenagers and had not yet completed high school. But they worked hard as employees for others upon their arrival and gathered some capital to invest and create their own small businesses. One of them owns one of the state’s main department stores that nowadays provides more than 1,200 jobs, which means the income to support around 5,000 people. Many other Palestinians are doing the same in other cities in Brazil, thus offering employment and support for thousands of families. In this sense, we can say that Palestine, through its people, is a donor country in an indirect way. 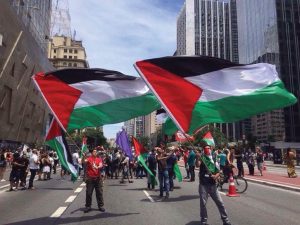 Another example is the small city of Santa Maria, located in southern Brazil, with a population of 280,000. Five young Palestinians migrated there from Palestine in the late 1950s and early 1960s and started their families. Like other Palestinian families, wherever they are, they try first to find a way to earn their living and then do everything possible to offer an education to their children. These five families were able to accumulate human capital for their host city and country. Three members of the first family hold PhDs in various fields of knowledge, and two are medical doctors. The second family has two university graduates, one of which holds a PhD in engineering and serves as a university professor. The third family also has a medical doctor, and the fourth also has a son who holds PhD in engineering and teaches as a professor at the university, serving as president of the professors’ syndicate and being actively involved in political movements. The fifth family has two dentists. I am not aware of any Palestinian family in Brazil that doesn’t have at least one or two university graduates. Thus, while Palestinians appreciate the accommodating environment and opportunities created for them in their host countries, they also contribute to the development and growth of these countries, being active members and good citizens as a way to express their gratitude.

The interaction and relation between Palestinians in the diaspora and those in their country of origin need more attention. Because the Palestinian population in the diaspora is more numerous now than that in Palestine, we must work intensely with the new generations, prepare them on an objective and scientific basis, so that they can engage and debate the question of Palestine with governmental, nongovernmental, and civil society institutions in the host countries. 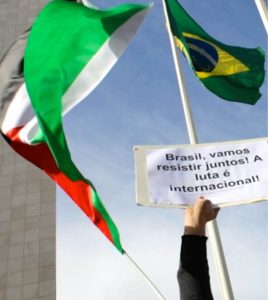 At the same time, a group of Palestinian youth created Sanaud in Brazil and in many other countries in Latin America. The purpose of the organization is to create awareness of the Palestinian question, fortify youth relations with their homeland, and seek justice for crimes against humanity that they themselves had suffered and that their brothers and sisters still suffer under occupation. Sanaud played an important role in connecting the youth of Palestinian origin in each state of Brazil and throughout Latin America. Political developments after the Oslo Accords, however, have negatively affected the performance of the organization. In the tenth FEPAL congress in 2019, the movement started to reorganize and revive itself, moving in the right direction to fulfill its objectives again. Still, several obstacles stand in the way because many youth lack solid knowledge or well-founded information regarding the Palestinian cause.

The language barrier is often another major issue. Most books and articles on Palestine are not available in Portuguese or Spanish, requiring these young descendants to learn a new language in order to educate themselves. And one of the major issues is the lack of interaction between the youth in the diaspora and those in the homeland. Many have visited Palestine with their families, but this is not enough. They need what is called politically guided tourism with knowledgeable people who can accompany their visit and explain in detail every aspect of Palestinian history, especially the Nakba, the local culture, and the social tissue of Palestinian society. For sure, their parents and grandparents have passed on historical and personal aspects and stories as well as the reality of Palestine, but this knowledge remains superficial and lacks the depth and rigor of scientific analysis.

A well-organized institution in Palestine that maintains direct and constant contact with diaspora youth is needed. This institution must be one of the main and most important institutions in Palestine, equipped with competent people who understand and know how to reach and engage in dialogue with the generations that have been born outside Palestine, aware also of their respective countries and cultures. Our youth are the future of not only the host country but also of Palestine. Therefore, they need to educate themselves and prepare for the reality that they will be facing forever, because the Palestinian cause is everyone’s responsibility.

Palestinians immigrated to Latin America with little capital, limited knowledge in the languages of these countries, and with the majority of them having completed no more than elementary education. They did a great job in building solid human and material capital. Although they have worked hard and within their capacity to build social and civil institutions, there is still a need to consolidate and empower these institutions through solid professional and voluntary work.

Finally, I would like to raise the necessity of developing accurate statistics and studies of Palestinian immigrants and their descendants in the Americas and Europe because most of the published numbers and narratives are mere estimates. The lack of real information leads to subjective conclusions. Thus, these studies should be the first step towards gaining a better knowledge of the Palestinian diaspora and its contribution to the host countries and how they can contribute to Palestine and the Palestinian cause.