It’s one of those days when you feel like digging deeper into your past while being actively alert in the present. This time I do not choose the teenage journal or love letters I am secretly preserving. Instead, the focus is on family files and photos; a collection of old, aging, yellowish, ripped papers with notes, figures, certificates, and letters elegantly handwritten by my father in Arabic and English. My eyes fall on a folder that I very gently prise open, unfolding an A3 document inside that states:

Here it is. The koushan, the deed to our Baq’a house!


The very first time I saw our house in Baq’a was just after the 1967 War, when one afternoon we set off from Sheikh Jarrah, crossing the Green Line to Mandelbaum Gate, behind St. George’s School that my brothers attended. We passed the Mea She’arim Jewish neighborhood that day to learn about orthodox Jews, covered with coats and hats, all dressed in black. The women wore long skirts and had wigs on their heads; children our age – seven or eight years old – wore kippahs on their shaved heads with hair tails cascading down their ears.


Finally, we reached the beginning of the railway whose train route traveled from Jerusalem to Beirut, Damascus, Cairo, and Baghdad. “Here is Qatamon,” my father said. I heard my father’s heartbeat pounding stronger and stronger as he whispered loudly, “Hayyo hayyo, hay il bayt (here it is, this is the house)!” My father humbly walked towards the green garden gate at the front of his house. I stood very close to him, hugging him from the waist, looking up to his face, watching his blurred eyes while mine were darting left, right, up, and down. He touched the gate from the outside and pointed with his finger to the balcony, “This is where we had our morning coffee with your grandmother.” 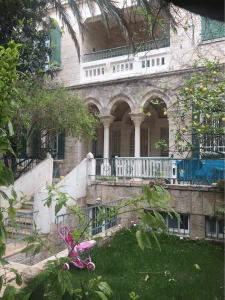 My father stood still; he seemed calm, but in reality I could feel the anguish, pain, and distress in his face. He wasn’t well. He called my mother who was also visiting the house for the first time (as he got married five years after the Nakba). “Baba must miss his mother,” I thought, but it was more than nostalgia. He looked troubled, yet he continued to entertain us with the house. “Look at the azkedenya, the lemon, the pomegranate… a whole life of green memories,” my father reminisced.

“What a shame the fountain is empty of water, full of dry leaves,” he lamented as he pointed at the water fountain in the middle of the garden. The house looked somber and heartbroken, exactly like my father. The yellow jasmine flowers were falling over the fence. We touched the flowers, when suddenly a woman came out and shouted at us in Yiddish, “Who are you?”

“Hello, madame,” my father politely greeted her, “may we go in? I’d like to show my house to my family.”

“No, you are not welcome to come in,” she spitefully retorted. “Go away.”

“Why is this women so impolite, baba?  Why doesn’t she allow us into our house?”

My father was let down. I think he struggled to maintain the strong father figure posture, but it wasn’t easy. His sorrow in this moment was channeled through my blood.

Looking back at that moment, I now realize that my father didn’t want to burden us with the grief that he had kept inside himself all those years caused by the catastrophic events in 1948 when he lost his home, his city, and his country.

The injustice my father endured, along with the deeply buried pain was passed on to me through his DNA. Somehow, the longing that I have for my father, who I miss immensely, has become inextricably linked with longing to be near his Baq’a house. My father grew up at Bab el-Silsileh (Chain Gate next to Al-Aqsa Mosque). However, the house he built and lived in, for less than seven years, still lies in the Baq’a Greek Colony.

Not a week goes by when I don’t go with my son to stand outside the house… it’s a ritual that I have become accustomed to. We stand quietly side by side while our eyes fixate on the stately well-crafted green home with jasmine, lemon, pomegranate, and azkedenya trees in the garden; we soak in the atmosphere. Memories of my father come flooding back.

My son, as humble and discreet as my father, observes the “new” inhabitants in these neighborhoods, and says, “These people do not belong to the architecture or to the landscape.”

Growing up, I carried with me the image of my father’s face as he was denied his home. A moment I shall never forget. And in order to heal from this obsession, I keep visiting my father’s house. The only problem is that I get arrested almost every time I am around there.

In 1998 when I returned home from London, where I pursued my postgraduate studies, I took a job with the Bethlehem 2000 Project. Every morning on my way to work, I enjoyed taking a detour to explore Baq’a, Qatamon, and Talbiyeh until one day I decided to walk towards the Greek Consulate and club to peek inside my father’s house. To my shock, I found a sign in Hebrew that read “FOR SALE”!


Bewildered, I started wondering who would dare sell my father’s house? My father died in 1978. He’s the only owner, and I have the koushan, the deed, the authentic “birth certificate” of the house. Not so discreetly, I entered the garden and then the house; I didn’t even need to break any windows or doors to get in. For years, I’ve yearned to be able to go inside through the pink stone arcades, to see the high ceilings, colored floors with tiles. Finally inside, I couldn’t believe my eyes. I was gallivanting inside my house like Alice in Wonderland, curiously discovering the stories that each room contained, as my father used to recount. The whole house was now a building site under renovation. Oh my God, this is my house, my dream house, exactly where I want to live.

As the house was undergoing a facelift, exactly like the Bethlehem sites and monuments within the Bethlehem 2000 Project, I arrived late to work every morning to be around my house and follow its rehabilitation.


The sale disturbed me. “Those Zionists forced my father out of his house, accommodated some strangers who came from Europe, and now they’re selling the house! No way!” I went to see a lawyer who had actually won two or three cases to repossess Palestinian property. “Netanyahu governs and privatizes, the occupation government is selling Palestinian houses appropriated in 1948,” the lawyer confirmed.

I consulted several lawyers who all tried to explain the Absentee Property Law again and again. But, my father was very present in Jerusalem after his expulsion. He was not absent. I was devastated. Seeing my determination, one of the lawyers advised, “You can sit in the house to stir up the media.”

My obsession grew stronger until a brilliant idea came to my mind “Well, what if I buy the house?” But, how could I possibly find $5 million? This story received international coverage. The Observer made the story its weekend editorial entitled “LSE graduate cannot buy her own house.” This came after thorough investigative journalistic research by a number of newspapers that found out that Israeli real estate agencies will not sell to a non-Jew. Le Monde, ABC, BBC, Al Hayat of London, the Guardian, and Al Jazeera covered my story, relating it to peace talks back in 1998, when Jerusalem and displaced Palestinian refugees were still on the agenda. 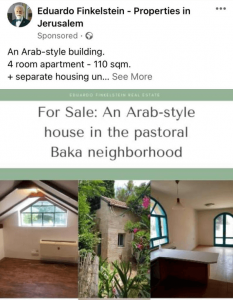 I went to the house every day and became friends with the masons (craftsmen) who were refurbishing the stone, clearly Palestinians. I ended up quitting Bethlehem 2000, convincing myself that charity starts at home and this is my heritage project to preserve and protect. When a stranger stood right at the entrance of the house, with a most evident arrogant look that I saw through his black Ray-Ban sunglasses, he asked me, “Who are you?”

“Ahhh. You must be the daughter of the owner. I mean the former…”

“Udi Kaplan. I have a real estate agency and we are selling the house. You see, it’s ‘balagan,’ a mess.” He continued, “the house will now consist of four apartments plus the ground floor.

“Who gives you the right to the house?”

“The Israeli government …you know Netanyahu loves money, so why keep all these houses in the government’s name?”

“But ‘we own the house,’ ‘the right of return’ …how much money are you asking for?”

“Around $5 million,” he said. “By the way, I am expecting some visitors who are interested in buying the ground floor, so you must leave to avoid problems.”

While I was struggling to behave in a civil manner to remain calm, he continued, “Ah, apparently you come here often, and you have been taking tiles, the neighbors told me.”

“Yes, correct. I shall take more tiles that you are uprooting.”

“But they are also for sale,” he said.

Respecting my ritual, I kept visiting and succeeded to place the tiles with geometric black, white, green, and terra-cotta colors as a carpet design in my Sheikh Jarrah house. I felt brave, happy, victorious. The fight is not over the tiles, nor obsession or possession, for me it was all about love and belonging. I felt that my father was proud of me keeping his legacy and fighting for what he wasn’t able to do.

When Naheel Aweidah, my dad’s cousin, happily surprised me with a visit after 40 years of exile, I was working in the Old City. Her permit allowed her to come one afternoon to Jerusalem. We looked into each other’s eyes and mischievously mapped our destination for the afternoon: Yalla to Baq’a. Naheel was born in Baq’a. Just before the evening descended, Naheel wanted to challenge her memory by leading the way to her uncle’s house – my father’s. Within five minutes we were standing at the exact location, outside the house, to take a photo, when suddenly the people living on the ground floor came out shouting in Hebrew. They let their barking dog outside the gate attack us and within minutes, the police arrived to arrest us.

I was so embarrassed when the police put us in handcuffs. One of the senior officers ordered chains to be put on my feet. Naheel was taken to a different room for investigation, then released. Naheel, who is a professor at the University of Damascus, later told me, “Huda, please don’t feel bad. Remember, I am writer, so I shall write our story.” When I kept asking the policeman why we had been arrested, he didn’t know how to respond. He kept shouting, “You know very well why you are here!”

“Is it because I took a photo of my father’s house?”

The police officer kept going in and out of the investigation room. “So, you go there often! And you take journalists, and groups with buses…” he said.

“Very true,” I murmured to myself!

“If you want to go home, you need to sign this paper.”

“If you are ever found near your father’s house, you will be deported!” he said.