“Father Ibrahim was a revolutionary fighter, writer, journalist, and thinker who was able to harmoniously integrate these personalities, embodying the splendor of Muslim-Christian brotherhood and coherent national unity.”Yasser Arafat 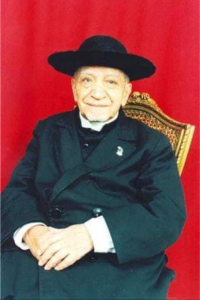 Ibrahim Ayyad was born in Beit Sahour in September 1910. As the young boy had a beautiful voice, the parish priest encouraged him to participate in the church choir and assigned him church tasks such as lighting candles on prayer days. These experiences nourished the boy’s desire to become a priest, and in 1928, he joined the Latin Seminary.

Ibrahim was passionate about reading and developed a habit of buying books and novels, particularly the works of Taha Hussein, Mustafa Lutfi Al-Manfaluti, and others. He proved to be an outstanding student in canon law and theology. He graduated from the seminary in 1937, and was ordained a priest, becoming known as Father Ibrahim Ayyad. As a priest he wrote articles in newspapers such as Filastin and Al-Difaa’, and completed a law degree.

In his role as parish priest of Ramallah, Father Ibrahim was genuinely caring, social, amiable, and perceptive. He participated in a variety of educational, national, and humanitarian activities and played a major role in founding Ahliyeh College, a well-known secondary school even today. He organized and joined national efforts to enhance Arab national aspirations, especially during a historic stage in Palestinian life. During the 1936 Palestinian revolution and the events that followed, he strongly supported Haj Amin Husseini in his struggle for national liberation from the British Mandate.

In 1945, Father Ibrahim was appointed head of the Latin Church Court in Jerusalem, where he served until 1957, when he was appointed to the same position in Beirut, Lebanon.

One day during the 1960s, two determined young men came to his residence to consult him on an important Palestinian matter. After long intellectual debates and discussions, their views converged on the need to make the voice of Palestine heard in the world as a cry for justice from a people who have been oppressed and displaced from their homeland. These two men happened to be Yasser Arafat and Khalil Al-Wazir. This was the start of Father Ibrahim’s relationship with the Palestine Liberation Organization and its top leaders.

Beginning in 1973, Father Ibrahim was appointed as an adviser to the PLO for Vatican affairs. He was influential in developing strong ties between Pope John Paul II and Yasser Arafat, starting with their top aids Cardinal Agostino Casaroli and Farouk Kaddoumi. Later, he moved to Tunisia and Latin America as the Palestinian Commissioner-General for Latin America and the Caribbean, which included 21 countries.

Father Ibrahim had clear and intrepid political views, yet he did not join any political party. He remained simply a faithful Palestinian citizen, working for Palestine and the people of Palestine without restrictions. When he returned to Palestine after the signing of the Oslo Agreement, he developed very strong ties with governments and public figures in a number of countries to invite support for the Palestinian cause. Even at an advanced age, Father Ibrahim retained his membership in both the Palestinian National Council and the Central Council, where his distinguished presence and activity were much appreciated. In his last days, his health deteriorated, and he passed away in January 2005 in Jerusalem at the age of 94.

Father Ibrahim lived through the Nakba, saw the displacement of refugees, and felt extreme pain for the tragedies that befell his people. He vehemently confronted all schemes that targeted the Palestinian cause. His firm stand and strong speech at the 1949 Jericho Conference provoked a storm as he stressed the Arab identity of Jerusalem and called for the refusal to annex the West Bank to Jordan. He was arrested and taken to a military court as a result.

Throughout his life, he advocated Palestinian national unity between Christians and Muslims, and carried this message all over the world. One famous example in this regard is what came to be known as the “Mosque of Father Ayyad” in Venezuela. He had realized that in Valencia, there was no Muslim burial place or mosque where Muslim expatriates could pray. So he led a campaign to raise funds to build a mosque. When he returned to participate in laying the foundation stone, and in response to the welcoming address of the imam who praised him, Father Ibrahim replied: “O Sheikh, it seems that you do not know the nature of our Palestinian people. Whether they are Christian or Muslim, they are Palestinian to the core. This Islamic-Christian brotherhood is our heritage, passed down from generations past.”

Father Ibrahim was also proud of what Jordanian officer Abdullah al-Tal said of him. As the commander of the battle of Jerusalem in 1948, al-Tal wrote in his memoirs: “The brave khoury (priest) from the Latin community, Father Ibrahim Ayyad, lived with us during the bitter days of war. He supported us in the fighting, worked with us with courage and steadfastness, and performed great services to Jerusalem.” He lived as a Palestinian, prayed as a Christian, worshiped God as a human, and followed throughout his life the philosophy “Repay to al-Watan (Homeland) what belongs to al-Watan, and to God what belongs to God.”