The concept of protecting Palestine’s natural environment has been gaining prominence in Palestinian society, at both regional and global levels. The Environment Quality Authority (EQA) was established in 1996 and united in partnership with the Palestine Wildlife Society in 2001. Both organizations work with civil and official institutions in the fields of nature protection and awareness raising regarding the value of Palestine’s nature and Palestinian cultural heritage. 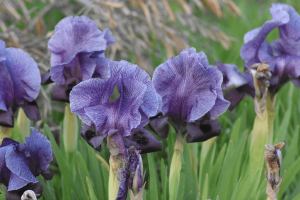 Since 1967, Israeli occupation authorities have aimed to separate Palestinian society from its natural surroundings while presenting themselves as the protectors of the environment. However, many Palestinians were determined to preserve nature long before the Palestinian Authority was established following the Oslo Agreement. In 1999, 13 Important Bird Areas were identified in the West Bank and Gaza Strip and recognized nationally. Most recently, 15 Key Biodiversity Areas in the West Bank have been proposed and are waiting to be approved at the national level.

Despite the Israeli occupation and the associated destruction of natural areas, grassroots organizations and NGOs in the West Bank and the Gaza Strip as well as the EQA have succeeded in identifying and protecting natural sites and their creatures. Thus, Palestine’s national bird, the Palestinian sunbird (Cinnyris osea عصفور الشمس الفلسطيني), and the national flower, the Faqqua iris (Iris haynei سوسن فقوعة) are now considered to be intrinsic symbols of the State of Palestine.

Iris haynei is also called the “royal iris” because it grows only one flower at the top of the stem that dies while standing straight. It is a tuberous ground plant that grows 30 to 60 centimeters tall and may even reach 75 to 80 centimeters in height, depending on the amount of rain in a particular year.

Faqqua irises thrive in the special climate of the Faqqua mountains where they bloom in an area distinguished by natural diversity and beautiful terrain. In general, they exist in ranges from Marj Ibn Amer to the Bisan mountains and valley, the eastern foothills of the Jordan Rift Valley, and the slopes of the mountains east of Jerusalem. Our field survey found that the Faqqua iris is widespread in the mountains surrounding the village of Faqqua after which the flower is named.

The concentrated iris area is found in between Arabuna village and Deir Ghazaleh, and from the village of Faqqua to the borders of Jalboun village in the south. This area has a view of the Nazareth mountains, and its original borders are the lands of Bisan and Jabal Tabor. It includes the villages and towns of Deir Abu Daif, Al-Mughayir, and Zababda. The specific area of dense iris fields is within the borders of the village and mountains of Faqqua, covering no more than 20–25 square kilometers; the only country in the world that possesses such a dense field is Palestine. That particular area is a fascinating display of natural terrain, with hills rising 450 meters above sea level, the highest in the eastern region of the mountains of Marj Ibn Amer. It rains at the high rate of 500 mm annually, and its fertile soil and attractive rocks permit the iris to grow comfortably. In addition, it exhibits great biological diversity, featuring a wide variety of plants and natural land. It is on the path that global migratory birds take on their seasonal journeys between Europe and Africa in autumn and spring.

More than a century ago, the English botanist John Gilbert Baker (1834–1920) insisted on naming the unique flower of the iris family with its distinct colors and scent after the name of the village that he visited for the first time.

In 2016, the Palestinian Council of Ministers declared the Faqqua iris the national flower of the State of Palestine, according to EQA recommendations. In 2017, the first Iris Celebration was held with 50 participants; in 2018, more than 500 people attended; in 2019, more than 10,000 people from various parts of the West Bank and around the world participated in the flower season.

Furthermore, the Palestine Wildlife Society was able to obtain funds for two consecutive projects to support the conservation and sustainability of the iris at both the national and global levels. The first project was implemented through the Small Grants Programme, the Global Environment Facility program, and the United Nations Development Programme (GEF-SGP-UNDP-PAPP) to support the iris’s conservation at the national level in partnership with the EQA. This successfully led to the establishment of a field laboratory that specializes in irises in Faqqua village.

The second project is currently in progress, supported by Birdlife International’s Critical Ecosystem Partnership Fund, and carried out by EQA in cooperation with An-Najah University, the Arab American University, and in cooperation with Dr. Magda Abi Daher at Saint Joseph University in Lebanon. In addition, the World Forum for Nature Protection and the village council of Faqqua provided donations to protect its land. This project focuses primarily on research regarding the iris’s reproduction processes. Amer Brahma, a master’s level student, works with researchers Munir Salah and Ahmed Al-Omari to prove that this flower can reproduce through seeds, whether in the laboratories of local universities or directly in nature. This is critical to prevent the decimation of this iris and the loss of the national flower of Palestine.

According to the standards of the largest institution for the protection of nature and the categories of the International Union for the Protection of Nature (IUCN), the Faqqua iris is placed at the top of the list of vulnerable species. The number of irises has decreased dramatically, and there is a high possibility of extinction. Therefore, the Palestinian community must make an effort to unite with the official and civil authorities to develop a plan to protect it as much as possible. Realizing that Iris haynei is a vulnerable species, the IUCN has directed its attention to efforts to improve the circumstances that are threatening its survival.

The Faqqua iris can be found in poetry and music. Famous singers and artists such as Tariq Abu Obadiah, Abdullah al-Hajj, Hawa Hassan, Fairuz, and others mention it in their songs.

When the public was given information about the iris and the village, the Palestinian Authority issued a Palestinian stamp with its image, and tourist paths were marked for visitors. Mr. Barakat Al-Omari, head of the Faqqua village council explains that for many years, Faqqua village had not been placed on the Palestinian tourism map. But with EQA support, the village has benefited from several projects, including being connected to a water network, the construction of agricultural roads, and more. The village has flourished and been revitalized as the local community welcomes visitors with a passion for nature paths, plants irises in a variety of different colors, and strives to coexist with the wide biological diversity of its natural surroundings. Hence, the Faqqua iris was never abandoned. It has been introduced into the educational curriculum and gained attention at the highest international levels of cooperation even though it is not yet as widely mentioned as it deserves.