Bethlehem, which in Arabic translates to “house of meat” (“house of bread” in Hebrew), is the capital of the governorate by the same name. The city which sits at an elevation of 765 meters above sea level is known for its Mediterranean climate, with hot, dry summers and cold winters. In winter the temperature can drop considerably (to between 1°C and 13°C in January) and there is frequent rain. From May to September the climate is mild and sunny. The hottest month is August, with highs of up to 35°C.


Bethlehem Municipality was founded in 1872 and covers an area of 7.5 km2, one third of which is the ancient old city of Bethlehem. It is home to the famed Church of the Nativity and Star Street (a UNESCO World Heritage Site). The municipality provides services to 35,000 inhabitants and 2 million tourists annually. One of its main services focuses on energy.

In Palestine, energy is a costly burden for both the government and citizens. The cost of electricity equates to 12–17 percent of per capita income, making it vastly more expensive than neighboring Jordan, where the cost reaches to only around 2 percent. When it comes to electricity, Palestine receives approximately 88 percent of its power from Israel.

Bethlehem is currently twinned with more than 100 cities around the world, 35 of which are in Italy. Since 2017, the municipality has been working to make Bethlehem a sustainable city, joining the Covenant of Mayors for Climate and Energy (www.pattodeisindaci.eu), and it is fully committed to projects that aim to produce renewable energy. This has led to the launching of the New Urban Resources (NUR) Project for renewable energy for Bethlehem, thanks to an agreement signed with the city of Turin in 2015, funded by the Italian Agency for Development Cooperation.


The NUR Project aims to help the municipality of Bethlehem boost its energy autonomy with solutions that are sustainable for the environment, including supporting local start-ups engaged in managing and maintaining energy systems. NUR has given Bethlehem an overall vision of environmental sustainability, driven by the work of the local authorities, the behavior of individual citizens, and the system as a whole.


The project meets the energy demands of the Bethlehem area, which is under considerable strain due to the increased population and urban development, exacerbated by the fragility of the Palestinian energy supply. For this reason, the first stage of the project entailed the construction of a pilot system of solar panels to cover the energy demand of public lighting and, in parallel, three mini-systems on municipal buildings, combined with specific training courses for local youth who work as electricians and technicians in the alternative energy sector.


For Palestine, renewable energy is a necessity. It is also an opportunity for economic development, which should be part of a strategic regional framework designed to help the country work towards energy independence. This is even more significant in light of the climate crisis: global warming and policies to reduce CO2 emissions that demand a transition from fossil fuels to renewable sources. Photovoltaic energy, especially solar panels, holds a great deal of potential for Palestine, given that it is safe and reliable and does not require high maintenance. It is efficient and cheap in providing lighting in outlying areas; it is flexible, given that solar panel systems can be expanded to respond to future needs; the energy produced is clean (does not emit toxic gases) and renewable; it reduces the intensity of natural disasters caused by the phenomenon of thermal emissions, and it creates new job opportunities for Palestinian citizens. In addition, excluding malfunctions or defects, solar panels can last between 20 and 30 years. As Palestine benefits from a high number of sunny days and the Palestinian population is relatively small, this means that individual initiatives or government projects are capable of delivering short-term results.


The NUR Project sought to implement interventions that would immediately impact the citizens of Bethlehem, who – together with the municipality – pay a fairly high bill for public and street lighting. Data from the local electricity company (JEDCo) shows that in 2017 the municipality of Bethlehem consumed almost two million kWh of electricity for public and street lighting, at a cost of ILS 1,109,706, which is equal to €288,500. In the same year, the municipality spent ILS 511,403, which is equal to €133,000 on 1,030,289 kWh consumed by just three municipal buildings located in the town’s main square (Manger Square) and the central bus station. This is a considerable expense for both the municipality of Bethlehem and citizens, as each residential, commercial, industrial, or cultural unit in Bethlehem pays ILS 15 a month for the public lighting service.

The NUR Project made it possible to create a municipal pilot system to cover part of the consumption of the public street-lighting system by connecting the energy produced from this project to the main electrical network, in a key area of the city, for both residents and tourists. The 285 kWp photovoltaic system was in fact installed on the roof of the bus station, which houses a shopping center and is the hub for numerous buses that take hundreds of tourists and pilgrims every day to the Church of the Nativity, just 300 meters away. The first stage of work (2019) led to the installation of the first 145 kWp plant, which generated 219,000 kWh of energy in 2020. The second leg of the project (2021) added another 140 kWp.

In parallel, the project also installed three mini-systems on municipal buildings, a prerequisite for advanced technology transfer. The first (9 kWp) was mounted above the changing rooms of a football field dedicated to Davide Astori, the Italian footballer who died in 2018. Renovated with the support of the Fiorentina and Cagliari football clubs, the pitch serves as a complex for three schools in the city center and hosts all teams and youth who want to play football in the city. In 2020 it generated 9,980 kWh. 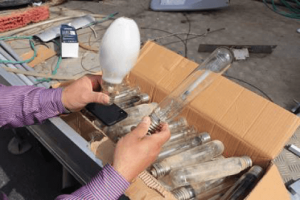 LED light bulbs, which are reliable and use less electricity than traditional bulbs, have been placed in the fixtures on the main streets that lead to the Church of the Nativity, helping to drive down the cost of public lighting.

In 2020, the Bethlehem Christmas tree lights were powered by renewable energy.

The second system (14 kWp) was set up on the roof of a municipal administrative building and in 2020 generated 14,700 kWh. Unfortunately, the system was out of order for more than 2 months as a result of a short circuit that could not be immediately restarted due to the COVID-19 lockdown in the city of Bethlehem in March and April 2020. A weather station was also set up there to collect information on solar irradiance and wind conditions, with a view to installing a wind turbine. In 2020 the overall output of the three systems installed was 243,680 kWh: 12 percent of the annual demand for street lighting for the entire city.

Also, as part of the NUR Project, the municipality is committed to installing a third 62 kWp mini-system on the Peace Center, a municipal building that overlooks Manger Square. Testing is scheduled for the end of August 2021.

To contribute to efficiency and energy-saving measures, the photovoltaic panels were complemented by the installation of LED light bulbs, which are reliable and use less electricity than the bulbs previously in use. Almost 270 lights have already been replaced in fixtures on the main streets that lead to the Church of the Nativity; this will also help drive down the cost of public lighting.

Lastly, the project also supplied LED lights for the famous Christmas tree that is put up every year in Manger Square, right next to the Church of the Nativity. Starting in 2020, the tree lights were powered by the renewable energy produced by the various systems installed.

The NUR Project has successfully promoted best practices and positively contributed to the lives of the citizens of Bethlehem and other areas of Palestine, solving one of the many critical problems that face Palestinians every day.

Article photos are courtesy of the author.