Empowerment means fostering the power within women in a process that allows women to make sense of their individual worlds, become aware of their interests, and perceive themselves as capable of decision-making.*1 In order to achieve women’s empowerment, gender perspectives have to be mainstreamed in all-inclusive policies. Gender inclusion enables women to exercise their human rights fully,*2 but this goal requires true political will and necessitates hard work by all defenders of women’s human rights who must engage in bringing more support to the process. 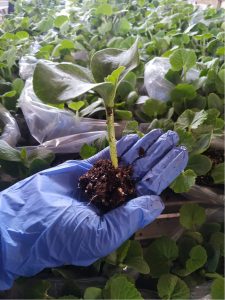 My experience as a researcher and gender specialist who has worked closely with women’s groups associated with the Union of Agricultural Work Committees (UAWC) has taught me to recognize and admire the union’s approach towards women’s empowerment. UAWC literature and practice show that it considers rural empowerment a multidimensional process that involves social, educational, political, cultural, and economic elements in order to enable women and help them gain control over their lives. Through agricultural interventions, UAWC provides safe spaces and an enabling environment for women, helping them to identify their priorities and then act upon them. UAWC’s women leaders exercise agency at many levels, both individually and within the family, collectively within agricultural cooperatives and nationally, as they contribute to determining national priorities and policy amendments.*3

In 2020 alone, the union helped women reclaim ownership and rehabilitate 4,000 dunams of agricultural lands, which directly contributed to strengthening the steadfastness and livelihood of 760 agricultural families, many of which are headed by women.

Agency and inclusiveness of rural women is progressively identified and recognized as a global priority. Women produce 70 percent of the food worldwide,*4 spend up to 90 percent of their income on the food, health, and education of their families – compared to only 30 to 40 percent among men*5 – yet remain marginalized and ignored in most societies. In Palestine, women’s entrepreneurship and their contribution to the Palestinian community is vital. But women do not enjoy the same rights as men, and empirical evidence shows that they lag behind men in many areas. For example, the percentage of agricultural holdings owned by women is estimated at 6.7 percent of the total agricultural holdings, compared to about 93.1 percent of agricultural holdings controlled by men.*6

As an integral part of its policy of engagement, UAWC requires that at least 30 percent of organizational interventions be directed towards women.

UAWC realizes this injustice, and its emphasis on women’s role in society considers the following facts: First, women represent almost half of Palestinian society (49 percent). Second, more than one-tenth of Palestinian households are headed by women.*7 Third, they provide most of the informal labor force in agricultural production, as 2,731 women work for wages and more than 41,000 women work permanently in agriculture without wages. And last but not least, women carry out approximately 75 percent of the agricultural animal production and plant production labor in Palestine.*8


To achieve gender equality, UAWC stands up for women’s rights and calls for an end to the displacement of rural families and the defense of women’s right to have access to and sovereignty over land, water, and seeds; it advocates and takes action to eliminate violence against women and encourage women to break the silence, take heed of inequality, and reach out to hold women’s hands throughout the journey of exploring their strengths.

Since 2004, UAWC and hundreds of Palestinian rural women have joined the global effort of La Via Campesina (LVC)*9 to protect the rights of peasants (both women and men). Their joint struggle has been crowned with the realization of the United Nations Declaration on the Rights of Peasants (UNDROP) in 2018. Giving great attention and consideration to women’s rights under Article 4: No Discrimination Against Women,*10 this declaration stresses the major role women play in rural agricultural settings and calls for zero discrimination against women, sound gender balance, and the participation and involvement of women at all levels.

Based on UNDROP principles, UAWC continues to work on securing the inclusion of women in national planning processes, promoting women’s right to proper access to information by providing them with all types of training and education, advancing women’s positions in social structures, promoting women’s associations and cooperatives, and enhancing women’s equal access to economic opportunities and financial services, including agricultural credit and loans. Moreover, UAWC’s gender equality interventions provide responsive agricultural-extension services, tools and machinery, and capacity building in various specializations, including rights and management. Women’s empowerment is a crosscutting objective for all UAWC interventions.

The stories of Nabila Jacob and Amina Abu Zneid exemplify UAWC’s approach towards women’s rights, an approach that empowers women by increasing their sense of self-worth, their ability to determine their own choices, and their awareness of their right to influence social change for themselves and others.

Nabila Jacob is a pioneer among Palestinian rural women and an inspiration for many younger women in her community. She is the chairwoman of Beita Cooperative Society for Food Processing, initiated in 2011 by five women with the objective of empowering local women by increasing the quality and quantity of their production and securing their own income. UAWC has accompanied them on their journey from the beginning, building their knowledge and capacities and supporting them in response to their priorities. 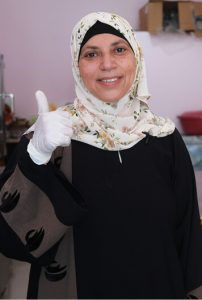 UAWC believes that increasing production quality and quantity leads to an increase in income and thus to economic empowerment. Nabila says that with help from UAWC, the cooperative managed not only to improve the quality of its soap production but also to increase the production from 100 pieces to 3,000 pieces per week. “Before we established the cooperative, the women members depended entirely on their parents or husbands. Today, we are financially independent and able to change our lives and help our families. The establishment of the cooperative has provided a stable monthly income of NIS 900 for each woman.”

In 2018, UAWC responded to the cooperative’s aspiration to expand its field of production to include the production and packaging of dates. Nabila says, “We wanted to employ more women, especially the ones with no income, encourage others to work, and create a safe space for ourselves to exchange knowledge and experience. UAWC encouraged us again and provided us with a machine to package dates, allowing us to expand our markets to the regional level.” Soon enough, the products of the Beita cooperative were distributed not only to local Palestinians but also to regional markets. According to Nabila, “We earned JD 5,000 from distributing our products in Qatar. But our true earning is not reflected in money but in having the honor to represent our homeland and share our legacy.”

“In the establishment phase [of our cooperative], UAWC worked on building our capacities and skills at the technical level and provided us with agricultural tools and machinery. This has contributed to gradually advancing our position in the community.”
Nabila Jacob

After years of struggle and fighting for its rights, the cooperative has earned its well-deserved position in the community. The patriarchal community has begun to recognize the cooperative and its members as a decision-making group. Nabila explains, “They started to respect us and our hard work, and we started to take on our earned position and raise our voices. The local council of Beta village began to consult us regarding the priorities of our community, and we became part of the planning and implementation processes of the local council’s strategic plan.” Today, 24 inspiring and pioneering women are leading change within their community.

The women of Beita have become not only role models for many young women but also representatives of their community.

Amina Abu Zneid is an extraordinary civil, political, and economic Palestinian figure. In a reality that is dominated by patriarchal customs and traditions that cage women, Amina managed to spread her wings and break free. A mother of five children and resident of Raboud village near Hebron, Amina stood strong against all challenges and the occupation-related restrictions on access to land and water. Her first step towards changing her life was to engage in voluntary community activities and encourage community volunteerism. 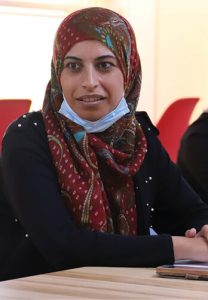 Through its local seed bank,*11 UAWC encouraged Amina to enhance her initiatives of planting and growing indigenous seeds by providing her with local organic seeds and the required technical training on how to plant, store, and reproduce seeds. With UAWC’s support, Amina has expanded her family’s cultivated land from a 200-square-meter home garden to two dunams of farmland. Today, Amina earns a monthly sum of NIS 800 from her seasonal cultivations, an amount, she says, that allows her to feel independent and productive.

Amina joined her efforts with other women members of Raboud Women’s Forum and helped encourage them to work collectively and learn from each other. UAWC promoted this collective initiative and provided them with the required knowledge, tools, production inputs, and coaching. This has led to the cultivation of around five dunams and a seasonal income of NIS 7,000. On the technical level, UAWC supported the women to expand their agricultural skills, at the same time allowing them to protect national resources and local knowledge. Amina appreciates that “UAWC helped us join our efforts and provided a space for discussion and the exchange of experience. They introduced us to new seed varieties that had not been cultivated in our region, and the indigenous seeds they have provided are better than the genetically modified ones. Indigenous local seeds are even able to adapt to the climate change and the weather of our village, and they consume less water.”

Amina believes that women’s empowerment is significant for Palestinian communities. Her calls for social justice and her hard work in advancing her knowledge and skills have encouraged the local community to trust and respect her; she has gained the confidence and knowledge to dare to speak out and voice women’s opinions. “My husband was once my voice, but now I have finally become my own spokesperson,” she asserts.

UAWC contributes to the establishment of 60 women’s cooperatives each year in the West Bank and Gaza. This is done by creating jobs for women through providing input production to women-led cooperatives, supplying all necessary tools and technologies, such as packaging lines, storage and food processing tools, provisions for home gardens, and technical advice and coaching.

In 2019, Amina was qualified to be part of UAWC’s Women Without Borders Initiative that aims to economically and politically empower 25 pioneering rural women.*12 Today in 2021, Amina is running for the Legislative Council with well-developed diplomatic and negotiation skills, holding in her heart and mind women’s empowerment as a core personal objective. She says, “We women are usually excluded from political decision-making processes. But because we face a lot of marginalization from men, I decided to be the first woman to run for Legislative Council membership so that I could promote the economic and political empowerment of women in my community and create a better reality for young women.”

These two inspiring stories are just examples of hundreds of others that UAWC contributes to and creates. Among its 9,000 annual women beneficiaries, there is definitely a lot more to tell!

*3 “What is agency and why does it matter for women’s empowerment?” Includovate, October 17, 2019, available at https://www.includovate.com/what-is-agency-women-empowerment/.

*7 H.E. Dr. Awad, Highlights the Situation of the Palestinian Women on the Eve of the International Women’s Day, March 8, 2020, Palestinian Central Bureau of Statistics, available at http://www.pcbs.gov.ps/site/512/default.aspx?lang=en&ItemID=3679.

*9 For more information, please visit the website of La Via Campesina, the International Peasants’ Movement, at https://viacampesina.org/en/.

*12 Announcement of Women Without Borders Initiative [in Arabic] on UAWC’s Facebook page, available at https://www.facebook.com/uawcpal/posts/3502413633145474/.