Fr. Arturo welcomes visitors to his church with a big smile. Seven miles to the west of Jerusalem lies the basilica of Emmaus, situated in the village of Al-Qubeibeh, overlooking the Mediterranean coast (31.840196° N, 35,134884° E).

According to Fr. Arturo, 69, Al-Qubeibeh was suggested as St. Luke’s Emmaus by the Franciscan believers who came to the Holy Land in the thirteenth century searching for the places of Jesus’s life and ministry that are mentioned in the Bible. 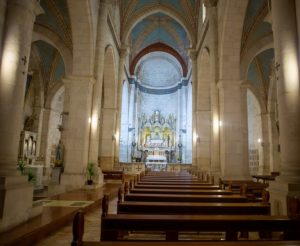 Emmaus Church, or St. Cleopas Church, is built over a Crusader fortress and church, which was built over a Byzantine one, which in turn was built over an ancient room believed to be the house of Cleopas and Simon who met the resurrected Jesus in Emmaus three days after his crucifixion. “Now that same day two of them were going to a village called Emmaus, about seven miles from Jerusalem” (Luke 24:13–32). Visitors can still find the Roman road in the ruins behind the church. A one-meter section of floor from what is believed to be the house of Cleopas and Simon is preserved in glass in the middle of the church.

The Franciscans adopted the site in 1335 and began an annual pilgrimage. They built a three-aisled basilica, the same structure found today, with a vaulted choir and an apse. During subsequent centuries, with the ongoing successive rulers of the Holy Land following the expulsion of the Crusaders in 1099 by Salah Eddin Al-Ayyubi, the church again fell into ruin. The nave, the central part of the church, was almost destroyed, leaving only a three-meter-high wall in place of the apse. In 1852, the Franciscan Custody of the Holy Land renewed pilgrimage to the site, an area of 21 dunums (5 acres), known as ad-deir (the monastery). Ten years later, the site was acquired by Marquise Pauline de Nicolay (1811–1868), who restored the barrel-vaulted structure as a chapel and gave it to the Franciscans. Later, rooms were added to accommodate not only the friars but also the pilgrims and visitors who came to study.

In 1902, the Franciscans obtained faraman (permission) from Sultan Abdelhamid to rebuild the church in a manner similar to the original plan. It was completed in 1907 and, in 1919, it was awarded the status of minor basilica (a building designated by the pope to be important and distinguished from other churches for ceremonial purposes).

Following the world wars, Emmaus Church was used as a hospital, and locals took refuge inside the deir. A structure of such grandeur inside this small village attracted many locals for protection, work, and prayer. Fr. Arturo, who moved here only a year ago, tells stories of the importance of the dair to the peasants around his church. For him, this is a great place for worship, a place of tranquility even though it is not easy for pilgrims to visit due to the current political situation in the occupied territories. Despite that, Emmaus Church hosts a procession on Easter Monday to commemorate the resurrected Jesus.

Fr. Arturo is a fun-loving priest. Clad in his brown robe, he tells of how the Franciscans embrace a life of simple detachment and poverty. You can visit Emmaus during the day from 8:00 to 16:00, but you have to arrange it first with Ashraf Zahran, the local custodian, at 056-845-3980 or 02-247-3612. Due to the current pandemic, admission to the church is restricted. 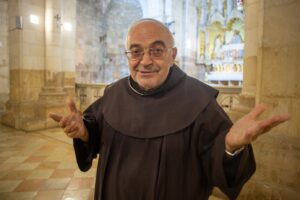 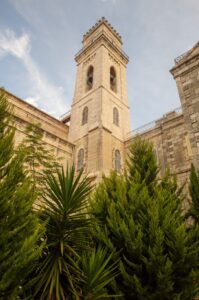 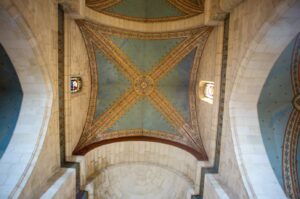