Steve Sabella (b. 1975 in Jerusalem, Palestine) is a Berlin-based artist with an MA in photographic studies from the University of Westminster, London, graduating in 2008 with the Caparo Award of Distinction; and a second MA in 2009 in art business from Sotheby’s Institute of Art, London. Among the many rewards Sabella has received is the Ellen Auerbach Award from the Akademie der Künste in Berlin, which led to a major monograph study on his art from 1997–2014, with a foreword by Kamal Boullata that ends with: “Sabella’s photographic images are a dream to discover.” 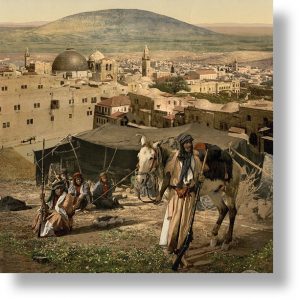 Sabella’s works have been exhibited at distinctive venues throughout the Arab and Western world and are in major museums worldwide and prominent private collections. Numerous documentaries on his work have been produced, and he has released short films and published essays on art. In recent years, Sabella has begun to explore image-making through words, beginning with his award-winning memoir, The Parachute Paradox (2016).

Images of Jerusalem and notions of the past and transience have featured prominently in Sabella’s recent work. In an interview with poet Asmaa Azaizeh in September 2020, “Liberating the Imagination from the Poisons of the Occupation,” he expressed how from the beginning of 2020, he was very productive, producing work that would normally take him five years to create, adding that he gained more clarity with every finished project. Among the many projects, The Sound of Jerusalem is 360-degree photography of Jerusalem’s skylines transformed into soundwaves. Similar in concept to Elsewhere, Palestine UNSETTLED is a liberating photobook journey to the “Palestine that once was, to the Palestine that thrives in our spirit… a voyage between image and imagination by looking directly at reality. The visuals float between painting and photography, revealing layers of history, where it becomes felt how the Palestinian culture was embroidered together by people who embrace life.”

About the exhibition Elsewhere, Sabella writes:
“Elsewhere is a journey to the land that once was, the land, the place that lives in our imagination. This is my seminal work after all those years of looking into images digging to discover their hidden realities. I recently wrote about how the archaeology of the future is the archaeology of the image and its genealogy. These are black and white images, photo-chromes from nineteenth-century historical Palestine, with a few images from Syria and Lebanon, colored in the past to give them a sense of reality. I collaged them, recreating the feeling of the place, as if one had traveled through a time machine and was suddenly present.
Elsewhere consists of 20 plates of history. Like The Great March of Return, Elsewhere is the renaissance of culture and life constantly under erasure. Yet, the spirit of the place and its people will always be alive. We can only carry the torch forward.”

More information on the sources and works mentioned are available at https://stevesabella.com/.

Palestine in the Nineteenth Century