The Edward Said National Conservatory of Music (ESNCM) believes that every Palestinian home should have access to a lively and creative musical culture. It is difficult to overstate the ESNCM’s impact on Palestine’s cultural life and its influence on other institutions in the Arab world over the last 29 years. These achievements come despite extreme obstacles created by the occupation and speak to the conservatory’s determination to thrive and inspire. As an artistic and educational body, ESNCM is not only a worthy Artist of the Month but also a shepherd for future generations of Artists of the Month and an important platform for all of us to enjoy. 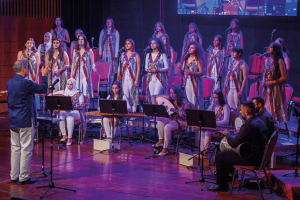 Since it opened in 1993, the ESNCM has provided music education to thousands of young Palestinians from the West Bank, Jerusalem, and the Gaza Strip. A fundamental part of the music education process is the creation of ensembles, both student and professional. This strategy yields important results: music students from a young age learn to perform in groups and before an audience, the ultimate goal of many future artists. Those who choose music as a career are given opportunities to perform professionally in Palestine, throughout the Arab region, and worldwide while the wider community receives the gift of rich and vibrant concert experiences. 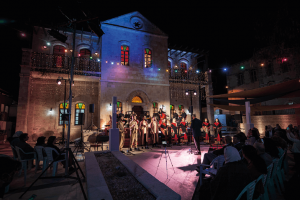 Student ensembles include Arabic music groups such as Qanunjieh (an ensemble based on the qanun, the Arabic zither) in Gaza; Turath (lit. heritage, a traditional ensemble of Arabic instruments), Ram, and Bazazeeq (plural for buzuq, the long-necked fretted Arabic lute) in Ramallah; Jilan in Bethlehem, and the Arabic Ensemble in Nablus. Banat al-Quds (Daughters of Jerusalem) is an award-winning all-female choir and Arabic music ensemble based in Jerusalem. 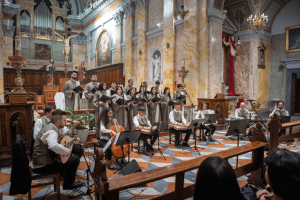 Western-music student ensembles include the ESNCM Orchestra, Gaza Orchestra, Jerusalem Children’s Orchestra, and the ESNCM Wind Band. The flagship Palestine Youth Orchestra attracts young Palestinian musicians from around the world for an annual training workshop and tour and has performed in countries around the world.

Professional ESNCM-run ensembles include the Palestine National Orchestra, the Opus Ensemble for classical chamber music, and the Jerusalem-based Al-Mathhabjiyeh (al-math’hab is the Arabic term for the beginning and refrain of al-nasheed [anthem], traditionally a popular vocal genre) choir and ensemble. The latest professional ensemble, launched in 2020, is the 70-piece Arabic Orchestra that is based on, and expands, the principle of the traditional Arabic takht; it includes conservatory students and teachers.

Several young musicians who, as ESNCM students, participated in these ensembles have chosen music as a career and are leaving their mark on Palestine and the world. Upwards of ten former students are enjoying international careers, living abroad, and at least another thirty are successful artists at the heart and soul of the Palestinian music scene, working as teachers, performers, producers, sound engineers, and more. 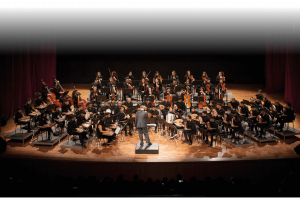 Recent years have presented unprecedented funding challenges. Several of ESNCM’s past financial supporters, including the European Union, have followed the United States in criminalizing the Palestinian struggle and imposing unacceptable conditions on funding. The ESNCM has rejected all such conditional funding and therefore faces a scarcity of resources that jeopardizes all its programs.

Thus, the ESNCM has launched a crowdfunding campaign to support its educational program. To buy a ticket for the next event and become a lifeline to efforts to bring music to every Palestinian home, please visit https://tzkrti.com/ar/events/688.