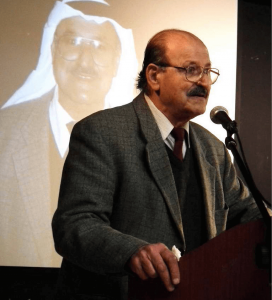 Dr. Sharif Kanaana is Palestine’s most renowned scholar of anthropology and the social sciences. His reputation has also spread abroad, as some of his research and books have been translated into several languages besides Arabic and English, in which he writes with great proficiency.

From 1977 to 2002, Dr. Kanaana joined the Inash Al-Usra committee, giving it a new dynamism by enriching its journal, titled Tradition and Society (that I edited from 1976 to 1984). Not only did he give greater diversity to the nontraditional research it published, compared to what we were familiar with at the center, by including topics in anthropology, the social sciences, folklore, and social psychology, but he also increased its seriousness, depth, and gratification and presented models of academic research and its applications. In the field of folklore, most dear to Dr. Kanaana, he wrote about the science itself and presented examples of relevant topics. The journal’s eighth issue, published in autumn 1977, included the article “A Description and Classification of Goats,” next he wrote about the games of children, modes of change, the rules of fights, folklore, popular proverbs, the consolidation of identity, al-tabun (the traditional wood stove), the Arabic ear, the future of Arab identity, Hilma Granqvist, Tawfiq Canaan, customs, and mores, among other topics. The committee also published two encyclopedic books with contributions by Dr. Kanaana and under his supervision: The Palestinian Folkloric Costume, authored by Omar Hamdan, the late Walid Rabi’, and Nabil ‘Alqam, with contributions by Sliman Mansour and Nabil Anani; The Culture of Procreation and Childhood, authored by the same group, with contributions by the late Abdul-Aziz Abu Hadba. During this period, Berkeley University published Dr. Kanaana’s famous book Speak, Bird, Speak Again: Palestinian Arab Folktales (in English), with contributions by Dr. Ibrahim Muhawi; it was later translated into Arabic and other languages. Other books published by Dr. Kanaana included Al-Dar Dar Abouna (The Home is the House of Our Father) and Tradition and Identity.

From 2002 to 2014, Dr. Kanaana and I worked together after I returned from overseas, publishing a book on military checkpoints and another one on jokes and contemporary myths from the 1987 Intifada and the first Gulf War. We resumed our work at the research committee on a part-time basis when the commission chose Dr. Kanaana as head of the center and designated me as his assistant. The first item on our agenda was to change the committee’s title to Center for Palestinian Heritage and Society Studies. Then, working as editor and assistant editor, we developed the Heritage and Society journal with a qualitative leap, starting with the forty-first issue, adding several important sections and improving the quality of its research and articles. We published the journal up to the fifty-seventh issue in 2014, when circumstances led to our resignation and the cessation of the center with the resignation of all of its members.

From 2006 to 2014, the most prominent and important work undertaken by Dr. Kanaana was the convening of seven conferences in Palestine. Close to one hundred research papers were presented at these conferences, with contributions by distinguished researchers from Palestine and abroad. The themes covered included: The Master Scholar Ibn Khaldun: His Life and Intellect; Towards an Arab-Islamic Prelude to the Study of People and Society; The Future of Palestinian Identity; The Palestinian Family: Its Role and Future; Zionist-Israeli Violence and Aggression: Features, Causes, and Roots; Accordance and Survival Strategies Among Palestinians; and The Study of People, Society, and Arab-Islamic Culture via The Palestinian Issue. The papers presented at six of these conferences were published in books edited by Dr. Kanaana.

Since 2015, Dr. Kanaana has continued to publish new books, the most important of which is An Introduction to Anthropology. We have also worked together on the five-volume work The Encyclopedia of Palestinian Fairy Tales, announced as the best work in anthropological and social sciences by the State of Palestine Award Committee. Tales of the World features stories chosen and translated by Dr. Kanaana to represent all culture areas of the world. Currently, we are working on a study titled The Simplified Introduction to Folk Heritage. In addition, Dr. Kanaana assists researchers and those interested in folk heritage and other aspects, especially graduate students.

While Samiha Khalil and the Popular Heritage Committee should be honored for establishing the committee and the Center for Society Studies in the early 1970s, Dr. Sharif Kanaana should be recognized for laying the foundation for and consolidating the science of Palestinian folklore. Moreover, he is beloved by all who have known him, whether as students or as fellow humans.